Sanctions and the arms race: what will Japan do without getting the Kuril Islands

February 14 2019
7
As follows from a report by the Japanese news agency Jiji with reference to informed sources, Tokyo intends to change its strategy in negotiations with Moscow on concluding a peace treaty and resolving a territorial dispute on the so-called “Northern Territories”. 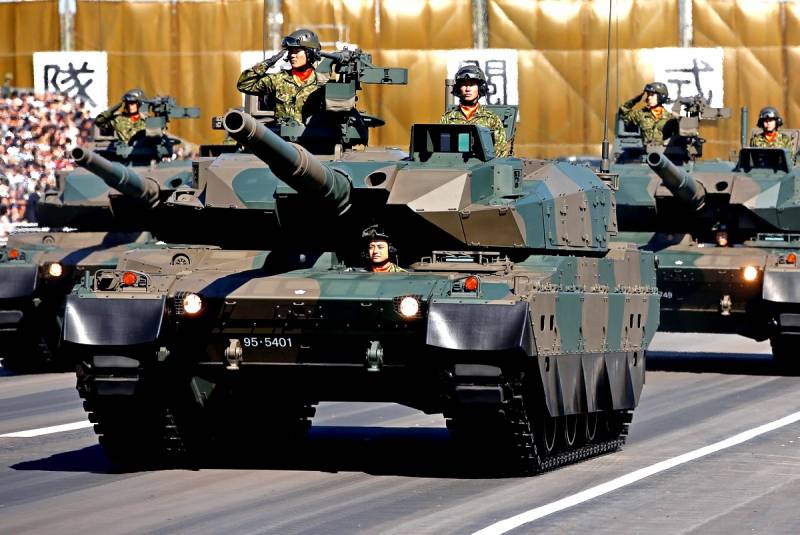 Japanese Prime Minister Shinzo Abe has begun revising the strategy of negotiations with Russia to resolve the territorial conflict and conclude a bilateral peace treaty following the results of the Second World War, since reaching broad agreement with Russian President Vladimir Putin at their expected meeting in June is now almost impossible
- reports agency Jiji.

Putin and Abe agreed to intensify the negotiation process for a peace treaty during a meeting in Singapore in November 2018 on the basis of the 1956 Joint Declaration. Japan puts forward the return of the four islands of the Kuril ridge as a prerequisite for concluding a treaty. On Tuesday [February 12 this year], Abe, speaking in parliament, refused to answer a question from one of the deputies about the possibility of concluding a peace treaty with Russia, provided that only the Habomai and Shikotan islands from the four islands of the Kuril ridge are transferred
- notes, for its part, the Russian news agency Interfax.

The legal incidents on which Japan’s territorial claims to Russia are based are of only academic and historical interest, since the territorial disputes of various countries are historically always based on a global balance of power, rather than honed legal definitions.

There is no judicial body or international organization that could issue a verdict on the belonging of a disputed territory to any state. If the other side does not agree with this decision, it simply will not fulfill it, and if it is forced to execute the decision, it will be a consequence of the balance of forces, and not legally binding formulations.

We only note that the now voiced demand of the Russian Foreign Ministry to unconditionally recognize the sovereignty of Russia over the Kuril Islands actually belonging to it seems to be quite balanced and documented, since this position has been occupied by the USSR and Russia since 1945.

As you know, the USSR entered the war against Japan in 1945, according to the Yalta agreement on the conditions:

2. The restoration of Russian rights violated by the treacherous attack of Japan in 1904, namely:

a) the return to the Soviet Union of the southern part of Fr. Sakhalin and all the islands adjacent to it,
b) the internationalization of the trading port of Dairen, ensuring the priority interests of the Soviet Union in this port and the restoration of leases for Port Arthur, as the naval base of the USSR,
c) the joint operation of the Sino-Eastern Railway and the South Manchurian Railway, which gives access to Dairen, on the basis of the organization of a mixed Soviet-Chinese Society with the primary interests of the Soviet Union, while keeping in mind that China retains full sovereignty in Manchuria.

3. Transmissions to the Soviet Union of the Kuril Islands. ”

On February 2, 1946, the Presidium of the Supreme Soviet of the USSR established that “from September 20, 1945, all land with its subsoil, forests and waters in the southern part of Sakhalin Island and the Kuril Islands is the state property of the USSR, that is, the public domain.”

The incident to which the Japanese appeal is based on the fact that neither in 1855-1905, when the Kuril Islands belonged to exclusively bilateral treaties between Russia and Japan, nor in 1951 at the conclusion of an allied peace treaty with Japan in San Francisco, which neither the USSR nor the PRC signed, it was never exactly determined which territories are the Kuril Islands and which are not.

A careful study of the collection of documents on the history of the formation of the Russian-Japanese and Soviet-Japanese border “Russian Kuril Islands. History and Contemporaneity ”, regularly reprinted in Russia, as well as correspondence and documents of the US State Department during the preparation and conclusion of the San Francisco Peace Treaty, shows that an unambiguous interpretation of the territorial composition of the Kuril Islands never existed.

Correspondence of the State Department in general, as befits working diplomatic documentation, is exclusively opportunistic. In one note, State Department officials say it will be very difficult to prove that Iturup, Kunashir, Shikotan and the Habomai Islands are not part of the Kuril Islands.

Another note states that there is no problem recognizing the sovereignty of the USSR over the Kuril Islands if Moscow signs the San Francisco Treaty.

And in the correspondence between senior US and British diplomats, there is a generally reasonable idea that for the territorial distinction between the USSR and Japan it is necessary to create a Soviet-Japanese commission, which will resolve all unclear issues, the condition was again the signing of the San Francisco Treaty by the Soviet side .

At the same time, Japanese territorial claims are substantially undermined by the well-known wording of the San Francisco Treaty that “Japan waives all rights, rights and claims to the Kuril Islands and to that part of Sakhalin Island and its adjacent islands, over which Japan acquired sovereignty under the Portsmouth Treaty dated September 5, 1905 ”.

We also note that probably I.V. Stalin and his ministers, concluding the Yalta agreement and declaring South Sakhalin and the Kuril Islands state property of the USSR, studied the documents as they should and understood what was being said when referring to the transfer of the Kuril Islands to the USSR.

The fate of the ministers of Stalin, if they did not know their job, was very sad, and this serves us as an additional guarantee of the validity of the grounds for the USSR’s position on the Kuril Islands.

It is also interesting to note that the 1956 Declaration, to which Shinzo Abe and Vladimir Putin now refer, is also drawn up very carefully. "Meeting the wishes of Japan and taking into account the interests of the Japanese state," the USSR "agrees to transfer Japan the Habomai Islands and Sikotan Islands" after the conclusion of a peace treaty.

According to the letter of this document, the USSR considers Japanese territorial claims to be merely “wishes”, although based on “the interests of the Japanese state.”

What can be expressed in a change in the strategy of Japan in negotiations with Russia?

Actually, Tokyo has no real leverage over Moscow.

Although during 2018, publications appeared in the Asian, including Chinese press, in which the scenarios of seizing the Northern Territories by Japan by military means were more or less seriously considered, and Russian observers took this as a new, rather alarming fact, these scenarios are no more than newspaper the paper on which they are printed, or Internet traffic spent on their study.

The only serious Russian publicly available scenario of the Japanese attack on the Kuril Islands belongs to a well-known military expert, corresponding member of the Russian Academy of Missile and Artillery Sciences, doctor of military sciences Konstantin Sivkov. If Japan opposes Russia alone, without the support of the United States, then Tokyo does not shine, although the struggle for the Russian armed forces will be difficult and will entail significant losses in material parts.

Japan also cannot provide significant economic pressure on Russia, although against the backdrop of sanctions by the US and the EU, Japanese sanctions will not be for the Russian economics enjoyable.

The most likely component of the new Japanese strategy is likely to be a combination of threats by sanctions pressure and the start of an arms race with Russia.

Nevertheless, both of them are a very long business, and the prospect of achieving the goal is doubtful.
Ctrl Enter
Noticed oshЫbku Highlight text and press. Ctrl + Enter
We are
Is Putin ready to fall into a geopolitical trap?
How did the Kuril Islands share: background
Reporterin Yandex News
Read Reporterin Google News
Ad
The publication is looking for authors in the news and analytical departments. Requirements for applicants: literacy, responsibility, efficiency, inexhaustible creative energy, experience in copywriting or journalism, the ability to quickly analyze text and check facts, write concisely and interestingly on political and economic topics. The work is paid. Contact: [email protected]
7 comments
Information
Dear reader, to leave comments on the publication, you must sign in.