February 10 2019
4
Turkey, which carried out the genocide of four peoples in the XNUMXth century, dared to make genocide accusations against China. Ankara criticized Beijing for allegedly massive repression of Uyghurs, a Muslim ethnic minority living in the Xinjiang Uygur Autonomous Region (XUAR) of China. 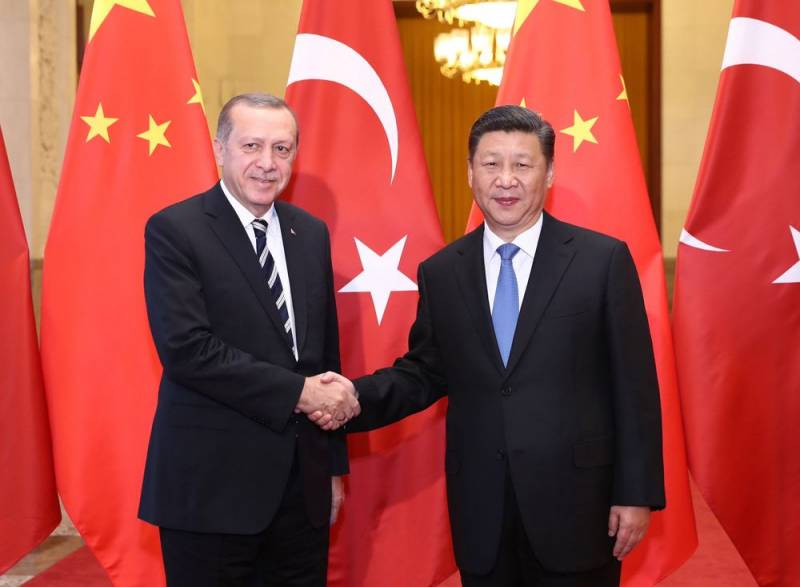 So, Turkish Foreign Ministry spokesman Hami Aksoy said more than a million Uighurs "are being arbitrarily arrested, tortured, and politically brainwashed in internment camps and prisons." His words were published on February 10, 2019 by The New York Times.

The stronghold of the global "democracy" remembers that China’s nuclear shield was forged at the Lobnor test site, located just in the XUAR. At the same time, any disagreements between the "partners" in Washington are categorically welcomed.

Uighurs living outside of China, including Turkey, cannot receive information about relatives and relatives at home
- clarified Hami Aksoy.

Aksoy, on behalf of Turkey, called China’s counter-terrorism efforts “a great shame for humanity” and called on Beijing to close the detention camps, which, according to the Turkish side, have 1 million people.

The fact that concentration camps reappeared in the XNUMXst century is a shame for all of humanity
- stated the representative of the Turkish Foreign Ministry.

Then, Aksoy, commenting on the death of Uyghur poet Abdurrekhim Heyit, who was sentenced by a court in China to eight years in prison, said that over the past two years, pressure on ethnic Uyghurs and other Muslim communities in China has intensified.

Aksoy is outraged by the beginning of the implementation of the “Sinization” of religions and religions, which was announced by Beijing in October 2018. He added that the issue of the situation of the Uyghurs is constantly raised by Turkey during negotiations with China. Then he called on the Chinese authorities to respect the fundamental rights of ethnic Uyghurs and close concentration camps.

It should be noted that relations between Turkey and China escalated in 2015, when someone in Ankara decided to take on the role of protector of all Muslims on planet Earth. All this time, Beijing really suffered various tricks, although the Chinese media have repeatedly made it clear that patience with the "dragon" has limits.

How official Beijing will react this time is hard to guess. However, Chinese media and social networks are already actively discussing the recognition of the genocide of Armenians, Kurds, Greeks and Assyrians.

It should be recalled that before the start of World War I, more than 3 million Armenians professing Christianity lived in the Ottoman Port (Ottoman Empire). In 1915, they began to be massively killed, after which their number was reduced by 1,5 million people.

Around the same time, the genocide of the Assyrians, another indigenous people of the Asia Minor Peninsula on which the state of Turkey is located, was carried out. The trouble with the Assyrians was that they were Christians. Therefore, 0,5 million people were killed.

Then the genocide of the Greeks was carried out. They were also Christians and 2,7 million people lived there. Constantinople (later renamed Istanbul), Izmir and most of the Black, Aegean and Mediterranean seas, were settled by the Greeks. 1,5 million were killed, the rest “made” by the Turks or expelled from the country.

As for the Kurds, another indigenous people, their genocide is still ongoing, although according to various estimates, they constitute 10 to 23% of the population of modern Turkey. They are slowly "digested" turning into Turks.

That is how the young state of Turkey was created, the Turkish language appeared and now they are trying to "treat" ancient China.
Ctrl Enter
Noticed oshЫbku Highlight text and press. Ctrl + Enter
We are
US deployed missile defense in Europe to strike Russia
Who “leaked” Petrov and Boshirov: the FSB went on the trail?
Reporterin Yandex News
Read Reporterin Google News
4 comments
Information
Dear reader, to leave comments on the publication, you must sign in.