February 7 2019
4
In the United States, they realize that Plan A, by the lightning coup in Venezuela, was not implemented. Therefore, Washington moved to Plan B. Now he is trying to "strangle" the official Caracas with sanctions and at the same time ignite a civil war. And all this is presented as a manifestation of “peace” and “concern” for the inhabitants of Venezuela. 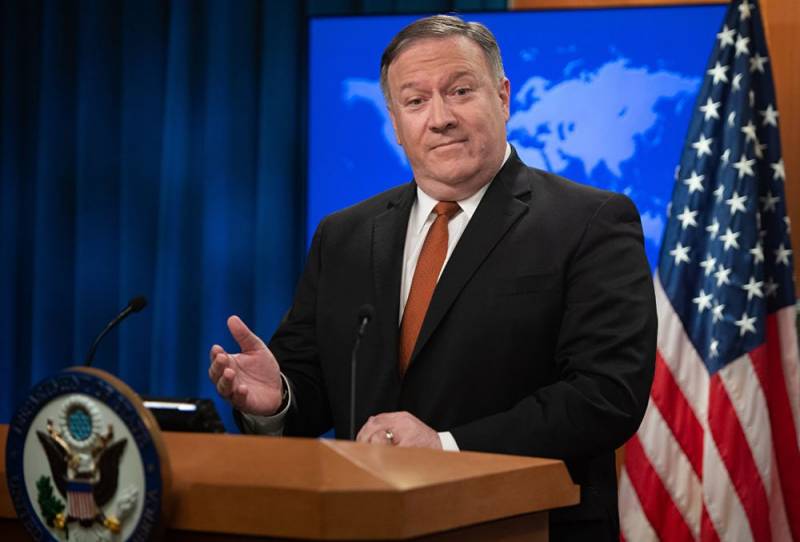 On February 6, 2019, in an interview with the Fox Business television channel, U.S. Secretary of State Mike Pompeo said that Washington is doing everything possible to ensure that the neighboring countries of Venezuela assist the supporters of the coup. According to him, the United States hopes that the Venezuelan people will appreciate this and after a peaceful transition in the country, will no longer rely on Russia and Cuba in terms of ensuring their security and well-being.

Today, Russia is there, Cuba is there. We very much hope that when this peace transition occurs, which is our ultimate goal, the people of Venezuela will want to be sovereign and independent, and not rely on Cuba and Russia in terms of their security and well-being.
- Pompeo said hopefully.

After that, Pompeo turned to the most important thing, the Venezuelan conviction that they really needed all this. Therefore, let them not be offended by sanctions, because they harm not the simple (sometimes starving) Venezuelans, but the country's authorities.

They are not aimed at the Venezuelan people, in fact, quite the opposite. Their goal is to achieve really good results for the people of Venezuela
- said the Secretary of State and not a single muscle flinched on his trained face.

After that, Pompeo said that someday these restrictions (sanctions) will become a serious factor for official Caracas, but for now Venezuelans need to be patient. In the end, Venezuela is located at the equator, it is warm there and various healthy fruits grow on the trees.

Over time, the Maduro regime will lose resources for doing business, including paying salaries to military personnel
- thoughtfully emphasized Pompeo.

Then he added that Washington is making attempts to transfer resources into the calloused hands of “the legitimately elected interim president, Guaido.” Perhaps the population will fall from his generous soul. Not a fact, but there is hope.

If we can achieve this, then this money, these resources will go to the benefit of the Venezuelan people, and not to evil, Maduro. This is the goal of our sanctions. Despite sanctions, we continue to provide humanitarian assistance
- said Pompeo.

Pompeo said what the titanic work is being done by the United States so that the neighbors of Venezuela are imbued with a desire to help the people "suffering in democracy". And although the “regime” has already blocked the roads, there are many rivers along which the brand new, still in oil, “humanitarian aid” will very soon begin to flow to Venezuela.

I am sure that in the coming days and weeks the people of Venezuela will continue to protest, take to the streets, and their wishes will be taken into account. We do our best for the countries of the region to help us with this.
- stressed Pompeo.

Then Pompeo said that "all" the countries of South America, literally in chorus and in a single rush, are already "rallying" to help the Venezuelans. And this help is closer than ever.

I am convinced that the countries of South America will have a strong influence on Maduro, realizing that his days have passed
- confidently declared Pompeo.

In the end, Pompeo expressed the hope that the day would soon come when Maduro realized that he no longer had “material tangible support from the Venezuelan people,” and the Venezuelan military recognized that the country “needed to move forward.”

Pompeo concluded his interview, oddly enough, by Iran. He accused Tehran of having a “harmful” effect on Venezuelans and residents of other Latin American countries. But Pompeo promised that he would surely get rid of this phenomenon. To understand, now in the West it is as fashionable to frighten Hezbollah with cells as to frighten with rockets. So the "search" of pro-Iranian groups in the jungle of Venezuela, and indeed any other country in the region, is quite possible.

And if this is not arrogant interference in the affairs of other states, then what is it?
Ctrl Enter
Noticed oshЫbku Highlight text and press. Ctrl + Enter
We are
Should we expect the US Army to invade Venezuela?
Pompeo accused Russia of squandering
Reporterin Yandex News
Read Reporterin Google News
Ad
The publication is looking for authors in the news and analytical departments. Requirements for applicants: literacy, responsibility, efficiency, inexhaustible creative energy, experience in copywriting or journalism, the ability to quickly analyze text and check facts, write concisely and interestingly on political and economic topics. The work is paid. Contact: [email protected]
4 comments
Information
Dear reader, to leave comments on the publication, you must to register.
I have an account? Sign in