“Russia will bang us”: Klimkin told how to build relations with Moscow

February 5 2019
4
In Ukraine, they continue to talk about Russia and the Donbass, actively giving advice to the future president of Ukraine, whose elections are scheduled for March 31, 2019. One of such advisers is the Minister of Foreign Affairs of Ukraine Pavel Klimkin, who, no doubt, will not remain at his post if not Petro Poroshenko is elected president of Ukraine. After that, Klimkin will cease to excite the public with his Russophobic conclusions. 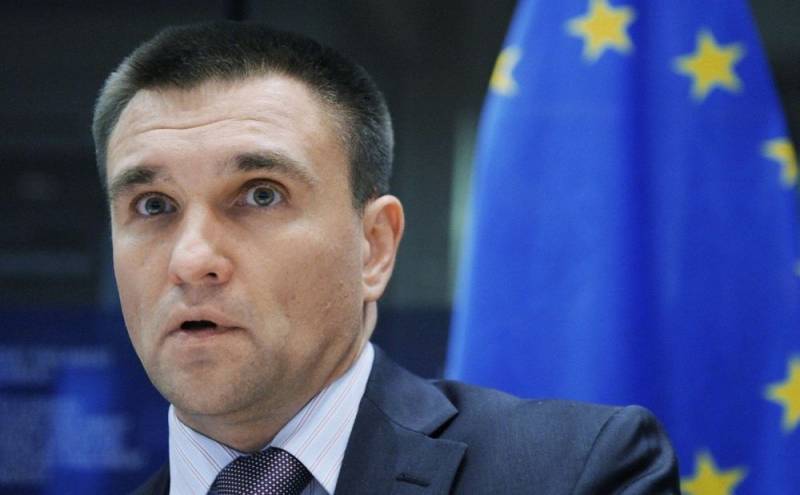 So, on February 5, 2019, Klimkin gave an interview LIGABusinessInform, in which he said that in relations with Russia a comprehensive approach is needed and the future president will need to build a logical and understandable for the rest policies in relations with this state.

Russia is an aggressor. External aggressor. Many still do not understand or do not feel it. With one hand - the aggressor, with the other hand - we create the impression of quasinormality, for example, we trade. Energoatom said that the purchase of Russian fuel - along with the American one - creates a balance, you see diversification. Do you call this diversification? Well then we arrived
- declared frank Russophobe.

Klimkin said that he would fight “in any reality” against the Donbass “stuffed with Russian structures” returning to Ukraine. In his opinion, this is definitely the end of European and democratic Ukraine. At the same time, he specified that in the future there will be an opportunity to “reset” the Donbass mentally, with ideas and economically, simultaneously with his return to Ukraine.

Two things are absolutely necessary: ​​Ukraine as a democratic project that will be successful and competitive in the world, and the achievement between the West and Russia of the understanding that Ukraine is a part of the democratic world. So far, as you know, we have neither one nor the other. But we can achieve this, I really believe in it
- emphasized Klimkin.

Let's see who, what and how will leave or gain. If we are successful, problems will arise for the Russian model. And there, it seems, they understand quite well. But if we do not reboot and get rid of the post-Soviet mentality over the next 5 years, Russia will crash us. Can you quote me
- sadly finished Klimkin.

We recently reported how Ukraine start prepare for the introduction of a visa regime with Russia and how Kiev solemnly tore up 49 agreements with Moscow and the same fate awaits the same.
Ctrl Enter
Noticed oshЫbku Highlight text and press. Ctrl + Enter
We are
Ukrainian Foreign Ministry is going to completely change relations with Russia
Why is the SBU looking for Russian relatives of Ukrainian officials
Reporterin Yandex News
Read Reporterin Google News
4 comments
Information
Dear reader, to leave comments on the publication, you must sign in.