Russia is losing its forest: is China to blame?

January 28 2019
7
The situation prevailing in the forestry sector of the Russian Federation is so disastrous that it was actively discussed at the highest level. The forest burns, it is eaten by pests, "black loggers" are illegally chopped. In recent years, it is customary to blame the appetites of the Chinese, who are the main consumers of the Russian "round timber" and actually encourage its illegal logging and export to China. There is a fair amount of truth in this, but is there only a problem in the Chinese alone? 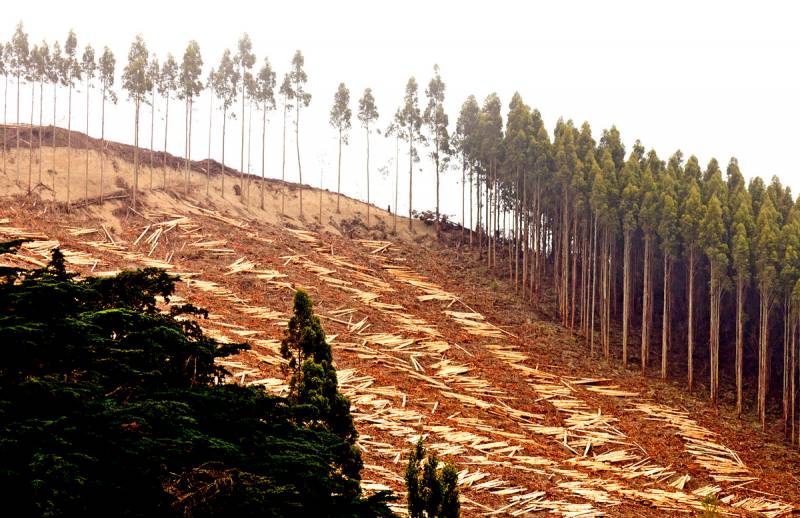 In fact, the Russian taiga and other forests disappear not only from the saw and ax, but from the fire. Every year in our country due to fires burns from 1,5 to 3 million hectares of forest. In the last 2018, all 4 million hectares were burned. And these are the forests that are being monitored and can be taken into account. If you believe the data of international organizations, over a year in Russia burns about 14 million hectares of forest! Moreover, there is no substitute for landing there simply because there is no one to do it.

Each such major fire is a real environmental disaster for the nature of Russia. The question is why the situation has become so catastrophic?

All familiar with the history of the issue are sent back to 2007, when the new Forest Code was adopted. His goal was “liberalization” of forest legislation with the aim of introducing market relations into it. The powers to manage forestry under the new law were transferred to “effective” private owners and regional authorities. Member of the Federation Council Sergey Ryabukhin commented on this situation:

The regions were given powers that were not backed by finances, as a result of which the number of foresters and leshozes was reduced tenfold. And the forest was left to its own devices.

The result was not slow to affect. In 2008, a year after the adoption of the new Forest Code, the number of forest fires increased by 40 times! As of the beginning of 2019, the number of employees of the Forest Guard is two times lower than the lowest norm and five times lower than the level of 2007! There is simply no one to work. Even worse, fire extinguishing began to translate into the "liberal" plane of "profitability." Judge for yourself.

Last year, fires burned in the Krasnoyarsk Territory on the territory of almost five hundred square hectares. But the regional authorities "washed their hands", refusing to extinguish with the following wording:

The projected costs of extinguishing these fires will exceed the potential damage that they may cause.

Very modern, right? Extinguishing fires is unprofitable! As a result, understaffed Krasnoyarsk foresters saved only 17,2 hectares of forest. But is it possible to blame those who were placed in similar conditions?

In 2007, many opposed the adoption of the “liberal” Forest Code. Regions gave a negative assessment of the bill, some deputies wrote an open letter to President Putin asking them not to sign a dangerous law. Even business representatives warned that they were not ready to invest in forest conservation and renewal. But nothing helped. The State Duma and the Federation Council adopted the bill, and President Vladimir Putin signed it. Exactly three years later, he courageously extinguished a burning forest from a Be-200 amphibious aircraft, when about 2010 million hectares were burned in 8.
Ctrl Enter
Noticed oshЫbku Highlight text and press. Ctrl + Enter
We are
China steals Russian forest: how to prevent this?
Who turned Russia into a forest
Reporterin Yandex News
Read Reporterin Google News
Ad
The publication is looking for authors in the news and analytical departments. Requirements for applicants: literacy, responsibility, efficiency, inexhaustible creative energy, experience in copywriting or journalism, the ability to quickly analyze text and check facts, write concisely and interestingly on political and economic topics. The work is paid. Contact: [email protected]
7 comments
Information
Dear reader, to leave comments on the publication, you must to register.
I have an account? Sign in