January 20 2019
0
On January 20, 2019, a large (double) terrorist attack was committed in the Syrian city of Afrin, controlled by the Turkish armed forces, mainly populated by Kurds. Two explosions killed at least 10 people, injured at least 18. 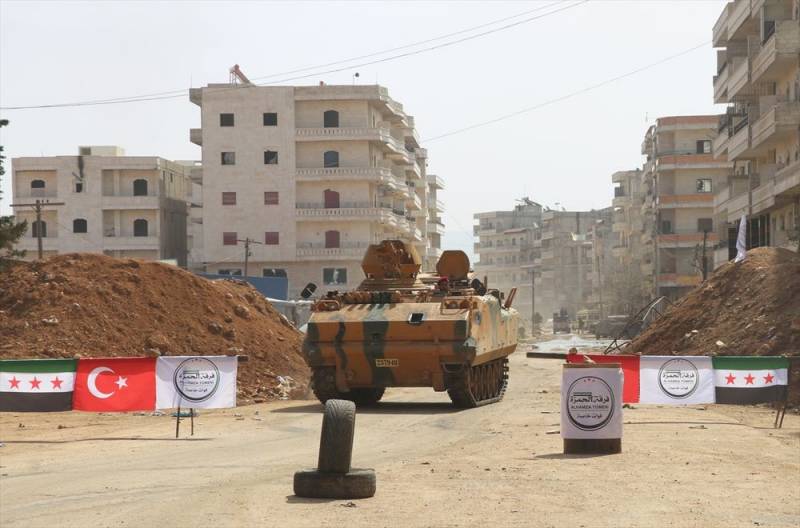 This was reported by a source from the "Free Syrian Army" (SSA). At the same time, it is specified that the third explosive device was discovered in the mentioned city and cleared by the forces of the SSA.

10 people were killed and 18 injured as a result of detonation of two explosive devices near the Cava ring. The goal of the first of these was a bus near the Saraya Bridge in Afrin
- leads «РИА Новости» source words.

It should be noted that the first bomb exploded in the passenger bus when he left the station terminal, which is located near the office of the local governor. This publication reports Daily Sabah. However, while none of the warring parties has claimed responsibility for this attack.

In addition, the Syrian news agency SANA reports that in the morning of January 20, 2019, a terrorist attack also occurred in the southern region of Damascus. There is no detailed information about the dead and injured. And before that, on January 18, 2019, a terrorist who had an explosive device with him was liquidated in Manbij controlled by the Americans and Kurds.

The vigilance of the patrols in Manbijd sharply increased after 16 people died as a result of the terrorist attack on January 2019, 15, and received 20 injuries. At the same time, the Americans confirmed the deaths of four of their soldiers, and three more soldiers were injured.


It is not difficult to notice that terrorist activity on the territory of Syria does not decrease and the danger remains everywhere, regardless of who controls this or that locality.
Ctrl Enter
Noticed oshЫbku Highlight text and press. Ctrl + Enter
We are
Syrian air defenses repel Israeli strike
First Soros, now Clinton: Trump opponents receive bombs in the mail
Reporterin Yandex News
Read Reporterin Google News
Information
Dear reader, to leave comments on the publication, you must sign in.