Poroshenko was convicted of hypocrisy

January 13 2019
0
The campaign for the election of the head of the Ukrainian state is gaining momentum, so Petro Poroshenko, as the leader of the most sluggish rating of the top five candidates, is not at all embarrassed in choosing the means to raise this rating. For example, the Presidential Administration of Ukraine solemnly reported that in 2018 the “guarantor” donated “all his salary” to charity - 270 hryvnias (this is about $ 480 at the exchange rate). 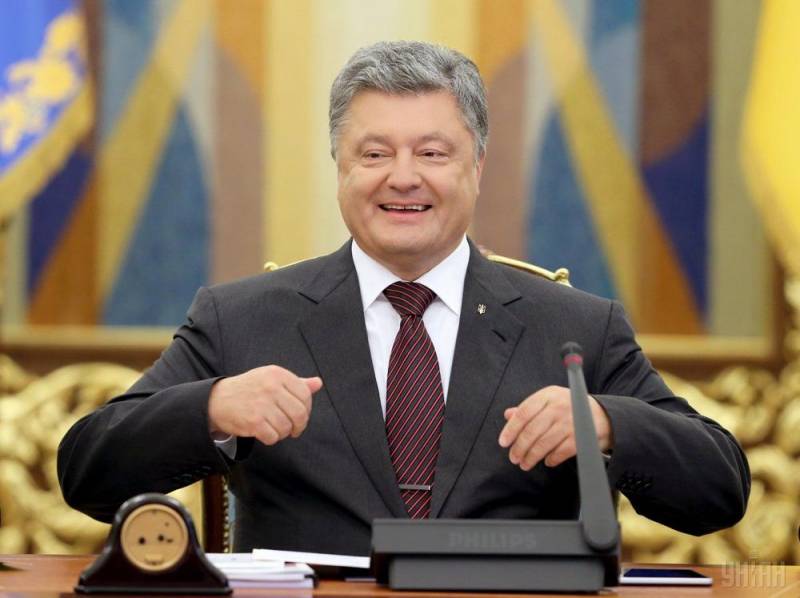 However all political the guile lies in the fact that Poroshenko’s officially declared income exceeded 1,3 billion UAH. (i.e., almost $ 46 million). Appreciated? Here are the citizens of Ukraine too. Moreover, most of the income was dividends from the trust manager of Roshen Corporation.

It should be noted that the expert community considers such a “charity” activity as an ambiguous PR move within the framework of the election campaign. Moreover, the funniest thing is that it is not known which fund the money was transferred to (Poroshenko’s presidential salary). Under Ukrainian law, such information (about the fund) can be distributed only with the consent of the person who transferred the funds.

In 2018, salaries in the amount of UAH 336 thousand were accrued (monthly - UAH 28 thousand). After the payment of mandatory taxes and fees, the salary in the amount of UAH 270. upon application transferred to a charity fund determined by the president of Ukraine
- report Ukrainian News in response to a request to Poroshenko’s Office of Management on this matter.

In this regard, it is extremely doubtful that this will somehow help Poroshenko raise his rating. And many political scientists, experts and specialists agree with this.

The moral side of this problem is that a person, being a billionaire, allows himself to do this kind of action, and he also tries to get certain dividends
- such an opinion in a conversation with RT expressed the director of the Institute for Peace Initiatives and Conflictology Denis Denisov.

By the way, only at the end of December 2018 Poroshenko declared two tranches of dividends. One in the amount of 556,7 million UAH., And the second in the amount of 574,9 million UAH. Most of this money came from the Swiss company Rothschild Trust Schweiz AG (managing the affairs of Roshen Corporation). At the same time, a full income statement must be submitted before March 31, 2019, miraculously coinciding with the election of the head of state.

And now, after the publication of these data, the press services of the Administration and Administrative Affairs of the President of Ukraine began to fuss, who began to tell the distressed that during his tenure as head of state Poroshenko had already spent more than 1,2 billion UAH. on “social charity and strengthening defense capabilities”. And the money from the Rothschild Trust Schweiz AG is what Poroshenko waited for three years, living almost from starvation.

Poroshenko directs the dividends that now come in three years to financially transparent the popularization of the development of statehood and the ideas of Euro-Atlantic integration, support for the creation of a single local Orthodox church, the development of the Ukrainian language
- stated in the Administration of the President of Ukraine at the end of December 2018 and all portraits of Poroshenko “pacified”, especially in the light of the tomos.

So on April 1, 2019, when the results of the presidential elections in Ukraine are announced, many people living in the “country of dignity” will perceive them as a joke.
Ctrl Enter
Noticed oshЫbku Highlight text and press. Ctrl + Enter
We are
Ukrainian ministers divided Yanukovych billions
Why cars have risen in price in Russia
Reporterin Yandex News
Read Reporterin Google News
Ad
The publication is looking for authors in the news and analytical departments. Requirements for applicants: literacy, responsibility, efficiency, inexhaustible creative energy, experience in copywriting or journalism, the ability to quickly analyze text and check facts, write concisely and interestingly on political and economic topics. The work is paid. Contact: [email protected]
Information
Dear reader, to leave comments on the publication, you must to register.
I have an account? Sign in