APU fired at an OSCE drone in the Donbass

January 12 2019
2
The unmanned aerial vehicles of the OSCE Special Monitoring Mission (SMM) in the Donbass are increasingly becoming targets for military personnel of the Armed Forces who open fire on them. Another similar incident was reported from the SMM press service on January 11, 2019. 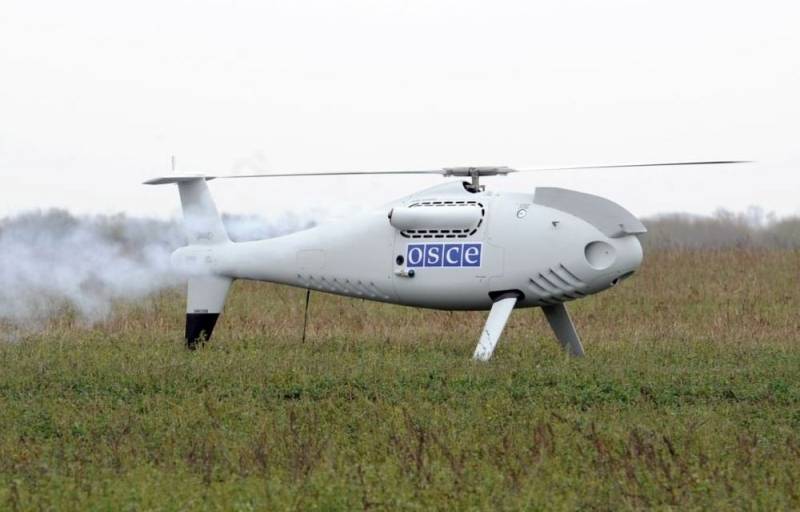 The shelling of the OSCE drone occurred on the territory controlled by the Kiev authorities in the area of ​​the eastern outskirts of Popasnaya, reports «РИА Новости». The drone of the mission routinely performed routine work, circled the territory and recorded various operations on the ground from the air.

This time, the mission team observed snow removal on the T-0504 highway. Suddenly, observers heard shots from automatic weapons, about six bursts. They were distributed approximately 1,5-2 kilometers east of the place of deployment of observers, just where the UAV was.

Observers concluded that the fire was fired at their drone. Since he "lost height, and the mission patrol lost control over him." The SMM clarified that it was not possible to return the drone.

It should be noted that before this, on January 2, 2019, the OSCE SMM reported that the mission's drone was fired during a flight over the settlement of Artyom. This territory is also under the control of the APU, but then the apparatus was not damaged. The military personnel of the Armed Forces are having fun or conducting targeted actions; it is not yet possible to establish them.
Ctrl Enter
Noticed oshЫbku Highlight text and press. Ctrl + Enter
We are
Russian Aerospace Forces destroyed militants attacking Aleppo
Is preparing a provocation? APU transferred Buki to Donbass
Reporterin Yandex News
Read Reporterin Google News
2 comments
Information
Dear reader, to leave comments on the publication, you must sign in.