Why Germany refuses to pay Greece 300 billion euros of compensation

January 11 2019
2
On January 10, 2019, the two-day visit of German Chancellor Angela Merkel to Greece began. On the same day in Athens, she held talks with Greek Prime Minister Alexis Tsipras. 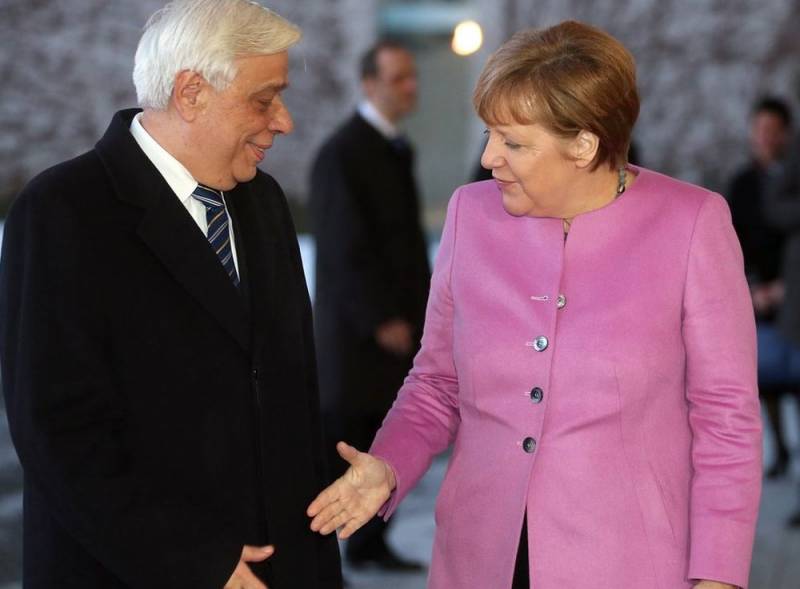 The next day, January 11, 2019, Angela Merkel met with the President of Greece Prokopis Pavlopoulos in his palace. There, the Greek president said that his country intends to resolve the issue of reparations and other compensations following the Second World War through the courts.

We believe that Greek claims are legally valid and can be collected through the courts. This issue can be settled in international courts.
- said Pavlopoulos.

The thing is that Athens estimates its losses from the German occupation of 1941-1944, including damage from a loan forcibly taken by the Germans - in the amount of 278 to 340 billion euros (according to the Treasury of Greece). At the same time, Angela Merkel, during the mentioned negotiations, although she recognized the moral responsibility for the crimes of the Nazis, she completely ignored the demand of Greece to pay damages and return the so-called "occupation" loan. She pretended that she simply did not hear these requirements, and therefore did not begin to talk about the material side of the issue.

We are responsible and acknowledge the crimes of the National Socialists. We support Greece for the benefit of two countries
- she emphasized.

It must be clarified that Berlin considers the issue of military reparations and any compensation for damage caused by the Nazis during the Second World War a long-closed and settled case. This was reminded to the world community, on the eve of the chancellor’s visit to Athens, the deputy official representative of the German government, Martin Fitz. She said that constantly arising demands of various "beggars" are useless - this issue is closed "finally legally and politically."

Moreover, Berlin rejects all the demands of Athens. German officials claim that their country has already fulfilled its obligations by paying 115 million marks back in the 1960s. And it was serious money at that time.
Ctrl Enter
Noticed oshЫbku Highlight text and press. Ctrl + Enter
We are
Russia must be punished: Ukraine has figured out how to return Crimea
The Battle of Hesse: Merkel's resignation just around the corner
Reporterin Yandex News
Read Reporterin Google News
Ad
We are open to cooperation with authors in the news and analytical departments. A prerequisite is the ability to quickly analyze the text and check the facts, to write concisely and interestingly on political and economic topics. We offer flexible working hours and regular payments. Please send your responses with examples of work to [email protected]
2 comments
Information
Dear reader, to leave comments on the publication, you must sign in.