The sky will be Chinese: big plans for the Comac C919

January 10 2019
2
Not taking into account the Chinese factor in the global aircraft manufacturing market means only one thing: to give it up to competitors. 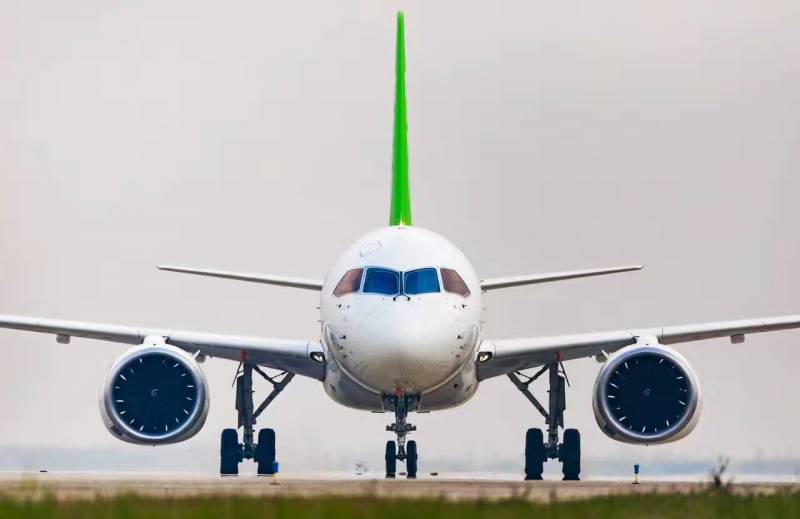 The end of the year was remembered by motorists of at least one important news. On December 28, the third flight specimen of the Chinese narrow-body airliner C919 took off for the first time in Shanghai. According to the Business Aviation Portal, the first flight lasted one hour and 38 minutes. As it became known, then the plane was supposed to overtake in the city of Xi'an, in the province of Shaanxi. There it should be used for flutter testing - spontaneous vibration of the wing, tail, or other elements that sometimes lead to the destruction of the structure. They will also check handling and a number of other important characteristics.

Recall that the first flight of the first prototype C919 took place on May 5, 2017, and the second - on September 28, 2017. During this rather long break in the Russian-speaking segment of the Internet, the plane has already been “buried” under loud exclamations about the prospects of its direct competitor, the Russian narrow-body MS-21. Which, like the Chinese "colleague" is the main hope of the aircraft industry. Only already Russian. 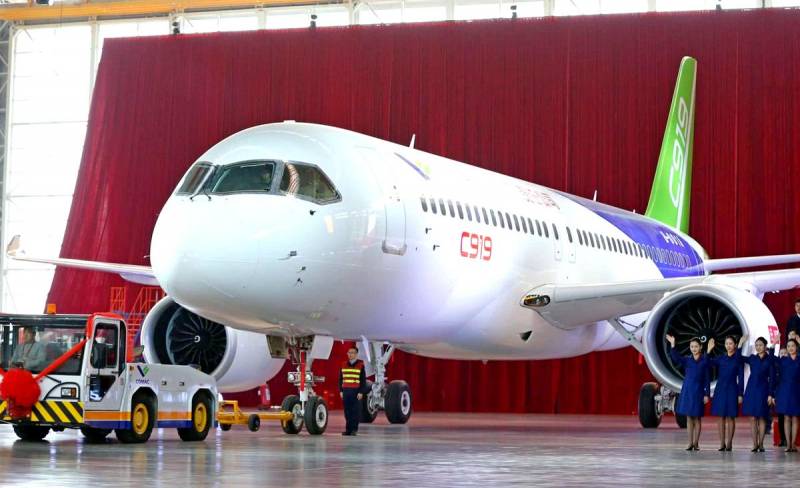 It is worth recalling that the MS-21, like the C919, so far only exists in triplicate. However, only two cars were in the air, although the first flight of the third car should be expected soon. In general, as far as one can judge, there are not so many complaints about the characteristics of the C919 and MS-21. Well, or at least they are not critical and are more suitable for the category of “childhood diseases” that cannot be avoided. This is important: in this case, the aircraft structure does not have to be redone and tested again. Recall that the C919 will be the largest serial airliner designed and built in China. In the C919-High Density variant, it can accommodate more than 170 passengers. The maximum flight range of the C919-All ECO modification should be 5555 kilometers, and the declared cruising flight speed is 834 kilometers per hour. In general, as we see, the characteristics of the aircraft fully comply with the requirements for this category of winged vehicles. But possible problems may lie in wait for the aircraft not in terms of technical characteristics, but in the plane of its advancement in the world aircraft market. And more on that later. 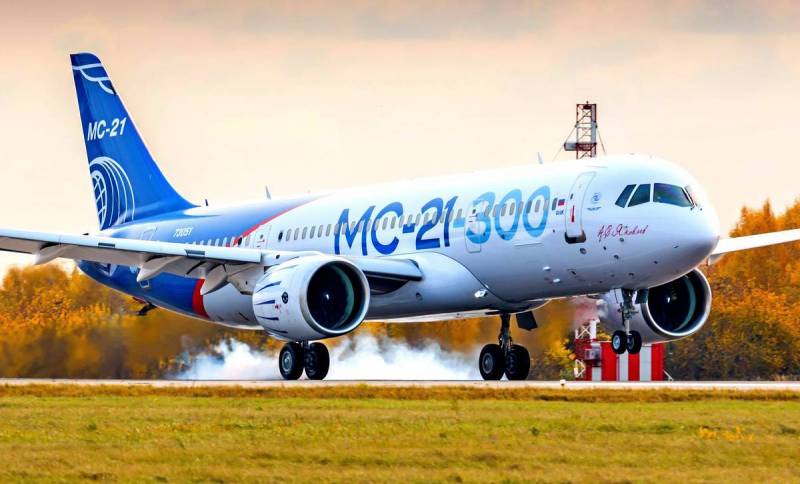 We shared an orange

If we talk about aircraft manufacturing, the first thing you need to know is that we live in an era of global competition between Airbus and Boeing. The numbers sound very impressive: from 2005 to 2016, Airbus received 11830 orders and delivered 6456 aircraft. At the same time, Boeing received 11024 orders and delivered 6406 winged vehicles. A very close fight, I must admit. And dangerous for both companies if something goes wrong. The remaining manufacturers, as you might guess, until they even try to "squeeze" between the giants.

From time to time, the Brazilian Embraer makes one speak about itself: by the way, a fairly demanded brand in the world market. Yes, only its independence is already relative. Recall, December 17, Embraer and Boeing agreed on the terms of the transaction on the creation of a joint venture. According to her, 80% of the shares of the joint venture will belong to Boeing, and 20% - to Embraer. Brazilian President Jair Bolsonaru even expressed concern about the possible loss of the national aircraft industry - one of the main pride of the Latin American country.

What do we see in the Chinese C919? On the one hand, the numbers are simply remarkable: as of the end of 2017, COMAC already had a portfolio of orders for 787 promising aircraft. This is a lot, despite the fact that competitors include such “monsters” as the Airbus A320 and Boeing 737, or rather, their latest modifications. For comparison, by the spring of last year, the Russian airliner MS-21 could boast of solid contracts for only 185 cars, which is infinitely far from the project's self-sufficiency.

What is the Chinese secret? Perhaps - at a fantastically low compared to analogues, the announced price of the aircraft at $ 50 million (the new A320 and Boeing 737 may cost more than 100 million per unit). But the real reason is seen in another. Almost all COMAC C919 customers are Chinese airlines. In other words, in the case of the new machine, there is a protectionism similar to that which we see in the Russian aircraft industry. However, it cannot be considered useless. After all, the Chinese air transportation market is so large that COMAC may have to produce more than one thousand new aircraft. In this case, the project can no longer be considered meaningless: it will give the Chinese both profit and extensive experience in designing new machines, and knowledge in promoting markets. 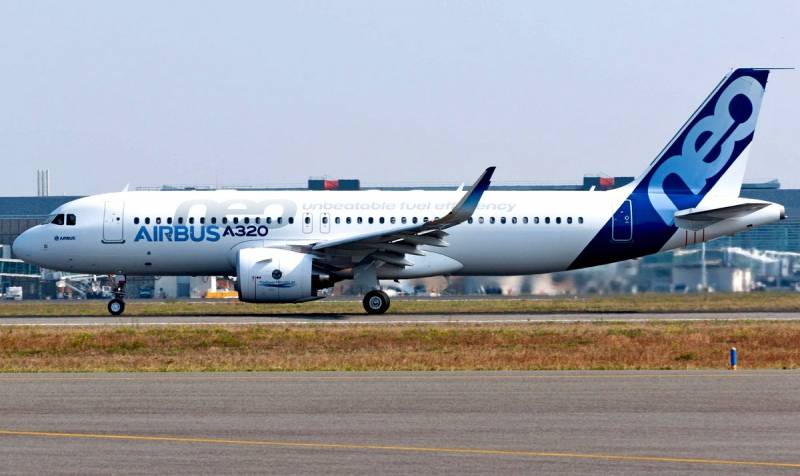 By the way, capturing foreign markets is task number two. It is complex, but not impossible for the Chinese. Even if the price of the aircraft rises from the said amount from $ 50 million (frankly, dubious) to 70-80, it must be assumed that the machine has every chance of finding its customers. They, for example, can become the so-called third world countries. Recall that now China is rapidly gaining ground on the African continent. Thus, according to unconfirmed reports, already three-quarters of African countries use Chinese weapons. The reason for such popularity of the developments of the Middle Kingdom is seen as political factor (the influence of the PRC on African elites is growing), and purely economic (Chinese weapons are cheaper than western ones).

The only thing that can become a real problem on the way to gaining the S919 share of the world market is its operation. Roughly speaking, an airliner can be cheaper than its competitors, but more complicated and more expensive to maintain. It is important to say that it is useless to sell an airplane as such. It is also necessary to draw up transactions that will provide everything necessary for its operation for many years or even decades. Otherwise, for example, if there are no necessary details, air carriers will have to resort to a terrible phenomenon for them, which is called "cannibalization of the fleet."

This is a loss of time, money and even prestige: both for the carrier and for the manufacturer of winged cars. For example: not so long ago, the Mexican company Interjet launched four SSJ-100s for spare parts for other aircraft. According to Interjet CEO Jose Louis Garza, there were problems with the maintenance of the SSJ-100: lack of parts and very long delivery times for aircraft parts. Needless to say, the prestige of Sukhoi Civil Aircraft JSC did not increase after that. And given the previous difficulties, the project cannot be called a failure otherwise. 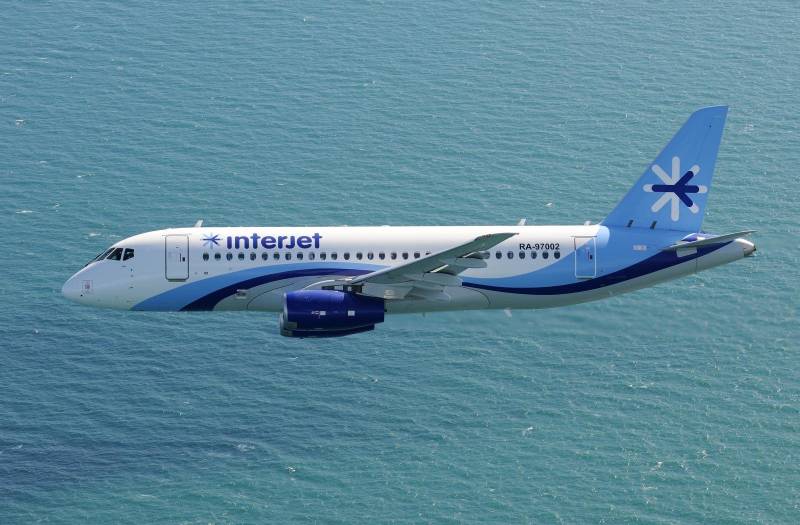 To avoid this kind of problems, you need to invest billions of dollars in creating a branched infrastructure literally around the world. It must be assumed that in China they understand this and will do everything possible to ensure that customers are satisfied with the new product. The Chinese are born entrepreneurs who manage to enter almost any market.
Ctrl Enter
Noticed oshЫbku Highlight text and press. Ctrl + Enter
We are
Will Russia's new project be able to challenge Boeing and Airbus
MS-21 airliner: there are risks, there is no plane
Reporterin Yandex News
Read Reporterin Google News
2 comments
Information
Dear reader, to leave comments on the publication, you must sign in.