January 7 2019
2
Having barely received the long-awaited, but very limiting their ability tomos, Ukrainian schismatics from the PTsU (Orthodox Church of Ukraine) announced their further ambitions. 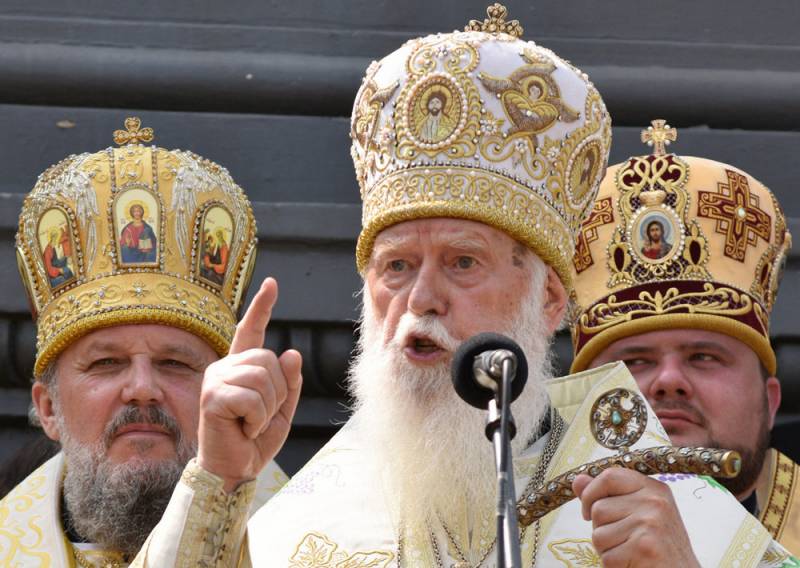 We claim patriarchy because we are a big church. We hope that the Ukrainian Church will eventually be recognized as a patriarchate by the Ecumenical Patriarch. This is the future, but it will be

The schismatic patriarch noted that despite the fact that the ROC KP has been a patriarchate for 25 years (from the point of view of schismatics), the PTsU temporarily agrees to be a metropolitan.

Filaret expressed the hope that after the PCU was “legalized” by receiving the Tomos, the Orthodox churches of the world, including the Russian Orthodox Church, will have to enter into Eucharistic communion with the PCU.

It is difficult to say what the schismatic Filaret was guided by making this statement, however, today there are no prerequisites for the Russian Orthodox Church, which stopped the Eucharistic communion with the Patriarchate of Constantinople, to suddenly change its mind.
Ctrl Enter
Noticed oshЫbku Highlight text and press. Ctrl + Enter
We are
Belarusians banned from attending new Ukrainian church
Ukrainian schismatics refused to lead the church. Who will Constantinople put?
Reporterin Yandex News
Read Reporterin Google News
Ad
The publication is looking for authors in the news and analytical departments. Requirements for applicants: literacy, responsibility, efficiency, inexhaustible creative energy, experience in copywriting or journalism, the ability to quickly analyze text and check facts, write concisely and interestingly on political and economic topics. The work is paid. Contact: [email protected]
2 comments
Information
Dear reader, to leave comments on the publication, you must sign in.