Why tomos is considered Poroshenko’s indulgence from criminal prosecution

January 6 2019
1
President of Ukraine Petro Poroshenko got too far into religious issues. Experts analyze what this is connected with and why the tomos received from Constantinople is of such great importance for a seemingly secular person, whose task is not to interfere with church affairs at all. 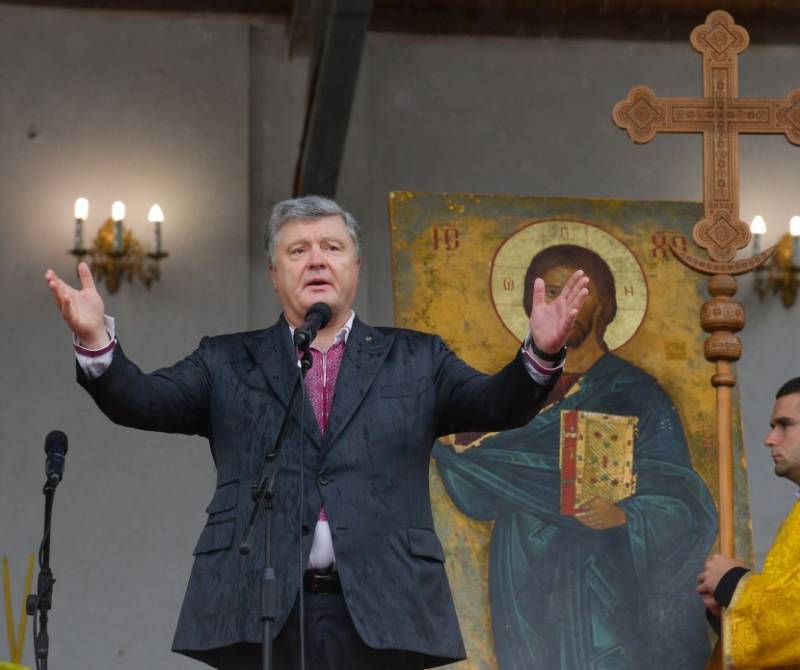 Many argue that this is one of the pre-election of technologies Ukrainian president. This will allow him to enlist the votes of some believers who have sided with the schismatic "new church." Online "Glavred", meanwhile, material appeared in which political analyst Andrei Golovachev pointed out another important detail.

In his opinion, the tomos and the fact that Poroshenko made mention of his own name in his text is also an attempt to defend himself against possible criminal prosecution. Thus, Pyotr Alekseevich is trying to play the role of “second prince Vladimir”.

Whoever wins the upcoming Presidential Independence elections, he will have to face the difficult legacy of the previous leadership. Moreover, the unpopular decisions on which the International Monetary Fund insists are inevitable. And here also Nord Stream-2 threatens to deprive Ukraine of a part of the revenues from the transit of Russian gas.

To reduce tensions in society, perhaps the new president will need to institute criminal proceedings against Poroshenko. There is a request for a significant part of voters, said the political expert. And if the new head of state does not do this, then his rating will drop sharply.

Under these conditions, tomos can become a kind of shield Poroshenko. Like, who dares to rise to the one who allegedly realized the "century-old dream" of the Ukrainian people? He hopes that the adherents of the “new church”, together with part of the nationalist-minded Ukrainians, will in this case create petitions and organize actions in his defense, which will further split the society.

As a result, Golovachev emphasized, the case may end with the fact that Mr. Poroshenko will be released from criminal prosecution with a wording similar to the following: “For special merits to the Fatherland” or something like that. So for the days remaining before the presidential election, the Ukrainian leader will arrange "religious hysteria" and put himself in the role of "Peter the Baptist."
Ctrl Enter
Noticed oshЫbku Highlight text and press. Ctrl + Enter
We are
Bartholomew signed a tomos on autocephaly of the Ukrainian church
Constantinople declared its rights to Kiev
Reporterin Yandex News
Read Reporterin Google News
Ad
We are open to cooperation with authors in the news and analytical departments. A prerequisite is the ability to quickly analyze the text and check the facts, to write concisely and interestingly on political and economic topics. We offer flexible working hours and regular payments. Please send your responses with examples of work to [email protected]
1 comment
Information
Dear reader, to leave comments on the publication, you must sign in.