March 11 2018
0
The Turkish army surrounded the center of the Syrian city of Afrin and is ready to enter there "at any moment." So says Turkish President Recep Tayyip Erdogan. According to him, this would be the completion of the operation "to eliminate terrorists." 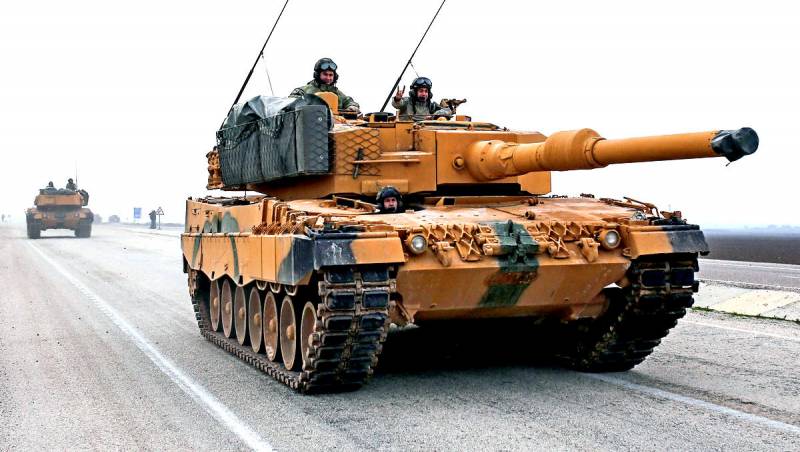 Our goal is Afrin. A total of 3171 fighters were neutralized. Center Afrina is surrounded. We are ready to enter the center at any time.
- such words of Erdogan were broadcasted by the Haberturk television channel.

The Turkish president means by “militants”, first of all, Kurds from the so-called. Syrian Democratic Forces and Self-Defense Forces. In addition, units of the Kurdistan Workers Party protect the city.

At the same time, the Turkish army acts in close cooperation with other terrorists - belonging to the "Syrian Free Army". This is an organization that the West considers "moderate Syrian opposition, but on the account of which there are no fewer crimes than on the account of the most radical Islamist forces.

On March 9, the Turkish armed forces, along with the gangs of the Free Syrian Army, captured the city of Jandaris (Aleppo province), located near Afrin. After that, the threat of capture by these forces and Afrin himself arose. At the same time, Turkish aviation destroyed members of the Kurdish armed groups who were trying to escape.

It is worth noting that the Turkish operation in Syria under the name "Olive Branch" began on January 20 of this year. This is Erdogan’s response to Washington’s actions, which supports Kurdish militias.

In the United States, it was felt that the Kurds should be supported as one of the “democratic” forces that are fighting the Syrian state and its army for the secession and creation of Kurdistan. In the current alignment of forces, this is beneficial to Washington as another way of waging war against official Damascus. To this end, the United States announced the creation of the Kurdish People’s Self-Defense Forces.

These plans did not appeal to Erdogan, who considers members of these Kurdish groups to be terrorists, posing a threat to Turkey’s security. The official reason for the invasion of Syria is the fight against these Kurdish organizations.

The problem is that there is a very hostile relationship between Damascus and Ankara. Erdogan’s regime from the very beginning supported anti-Syrian militants. Material supplies, weapons, and ammunition were transferred through Turkey to various terrorist groups. From there tens of thousands of terrorists seeped into Syria.

Therefore, the true goal of Erdogan can be far from being only in the fight against pro-American Kurdish groups, but also in further support of such a force as the “Syrian Free Army”, as well as other gangs fighting against the Syrian army.

In addition, neither Washington’s actions nor Ankara’s actions were coordinated with official Damascus. Moreover, the Syrian state directly and clearly opposes the military operations of these states on its own territory. There was no UN Security Council sanction on all these actions. Thus, both the United States and Turkey are aggressors towards Syria.

In particular, the Permanent Representative of Syria to the UN, Bashar al-Jafari, constantly recalls this in the international arena. Once again, he accused the Turkish leadership of opening borders for tens of thousands of militants and financing their activities. In addition, Jafari noted, Turkey is creating camps on its territory where terrorists undergo combat training. There is also the danger that chemical weapons may fall into the hands of gang members through Turkish territory.

Syrian Permanent Representative to the UN also accused Ankara of non-compliance with the recently adopted Security Council resolution No. 2401.

Turkish Foreign Minister Mevlut Cavusoglu promised that the military operation "Olive Branch" will be completed by May 2018. But there is no guarantee that the Turkish army will indeed leave Syrian territory after that. Most likely, one can expect from Turkey that it will, under various pretexts, delay the terms of its military operation or continue under a different name.
Ctrl Enter
Noticed oshЫbku Highlight text and press. Ctrl + Enter
We are
Enraged Erdogan ran into the Russian army in Syria
Turkish troops massacre in Afrin
Reporterin Yandex News
Read Reporterin Google News
Ad
We are open to cooperation with authors in the news and analytical departments. A prerequisite is the ability to quickly analyze the text and check the facts, to write concisely and interestingly on political and economic topics. We offer flexible working hours and regular payments. Please send your responses with examples of work to [email protected]
Information
Dear reader, to leave comments on the publication, you must sign in.