Contrary to Rosatom: US conducts dangerous experiment in Ukraine

December 22 2018
0
Information leaked to the Ukrainian media provoked indignation at the patriotic public of Independence. It turned out that Kiev extended for another five years the contract with Russia for the supply of nuclear fuel, trying not to advertise this. The Russian company TVEL, which is part of Rosatom, will account for 60% of the fuel market for nuclear power plants, and the American Westinghouse - 40%. These data cause quite mixed feelings. 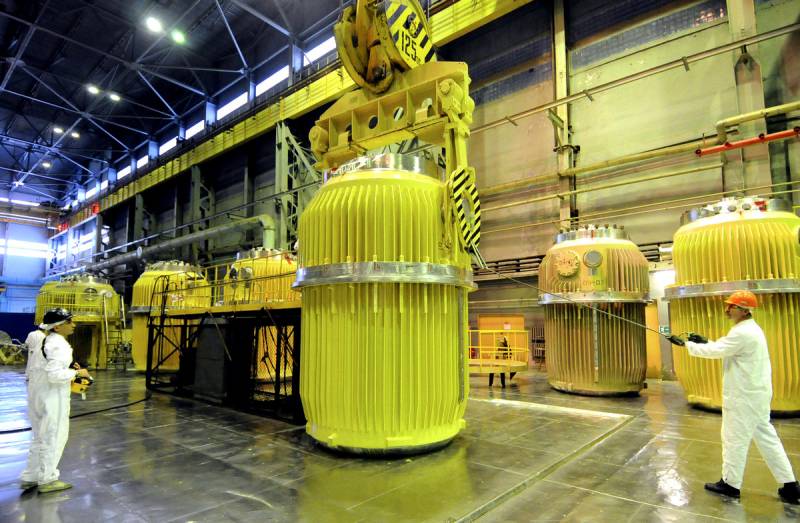 On the one hand, despite all the foreign policy statements of Kiev, Russia has maintained a dominant position in the Ukrainian nuclear energy industry. Recall that nuclear plants generate about 60% of all electricity in Nezalezhnaya. Let the Poroshenko regime declare its readiness to completely switch to American fuel from Westinghouse, but this did not happen, which can be considered, in a sense, a Moscow victory. Yes, and Kiev itself, since Russian nuclear fuel is cheaper than products from the United States.

But on the other hand, there is an extremely disturbing trend. It is no secret that the United States considers Ukraine, including as a testing ground for its own nuclear programs.

At first, Westinghouse is steadily trying to fit its fuel rods to Soviet reactors, and they have come very far in this. Two types of reactors are operated at Ukrainian nuclear power plants - VVER-1000 and older VVER-440. So, the Americans focused precisely on adapting their fuel to the mass type VVER-1000. Expert Alexei Anpilogov explains that now the danger of using non-native fuel rods in Soviet and Russian reactors has drastically decreased:

These will be either some kind of intra-sectional problems, or problems not related to the release of radioactive substances into the environment. That is, minor incidents and accidents.

Given the fact that VVER-1000 is quite widespread in the countries of Eastern Europe, this means the possibility of further crowding out the Russian Federation on this market by Westinghouse. The Americans “graciously” left the maintenance of older reactors to the share of Rosatom. 40% of fuel at Ukrainian nuclear power plants to the share of the United States - this is very, very much.

SecondlyWashington sets up a dangerous atomic experiment on Square and its population. The fact is that neither Kiev nor Westinghouse owns by technology reprocessing spent nuclear fuel. Russia and France have it, the rest of the countries that have nuclear power plants store nuclear waste in underground storage facilities. But it was in Ukraine that they decided to conduct an experiment with the storage of spent nuclear fuel on the surface of the earth. Moreover, they are building it in the infamous Chernobyl exclusion zone in the Kiev region, relatively close to the confluence with the Kiev reservoir.

What could be the consequences of such an experience in a country with a complex socialeconomic a situation dangerously balancing on the brink of war with Russia is difficult to predict.
Ctrl Enter
Noticed oshЫbku Highlight text and press. Ctrl + Enter
We are
It's important12
Cheaper: the United States became embarrassed by Ukraine, but lost Europe
The Chinese put Rosatom from Ukraine
Reporterin Yandex News
Read Reporterin Google News
Information
Dear reader, to leave comments on the publication, you must to register.
I have an account? Sign in