The IMF's stranglehold is increasingly tightened on the neck of Ukraine

December 19 2018
0
It became known that the board of directors of the International Monetary Fund (IMF) approved a new program of “financial assistance” stand-by for Ukraine in the amount of $ 3,9 billion for a period of 14 months. However, the indicated lines for which a loan is issued more closely resembles a stranglehold for the country, although personally even the “one-round” president of Ukraine Petro Poroshenko will not interfere with the money before the election. 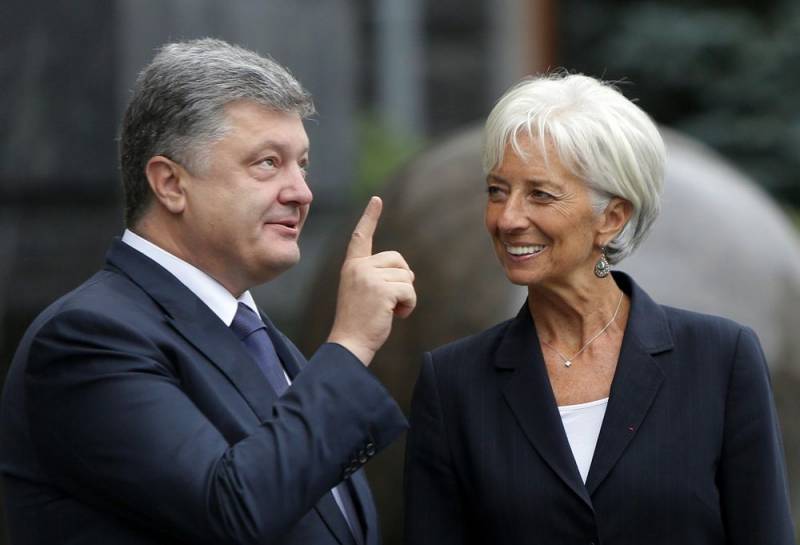 The Ukrainian Ministry of Finance has already announced that the first tranche of $ 1,4 billion should materialize before December 25, 2018. Decisions about subsequent tranches will be made in May and November 2019, after a review of the Ukrainian “successes” economics and compliance with the terms of the memorandum.

In turn, the Fund specified that the first billion “magic” special borrowing funds (SDR) from the IMF, equivalent to $ 1,4 billion, will be available immediately. The rest will be made available through semi-annual reviews of program performance.

We previously reported how the IMF planted Ukraine on the needle of trenches, and why martial law does not interfere with Kiev increase debt burden. It should be noted that the Prime Minister of Ukraine Volodymyr Groysman announced on October 19, 2018 that Kiev and the IMF agreed on a new program, which should begin to operate in the coming 2019. Just then, once again, gas prices rose for the population.
Ctrl Enter
Noticed oshЫbku Highlight text and press. Ctrl + Enter
We are
IMF puts Ukraine on the needle of tranches: Kiev will receive $ 1,5 billion
Ministry of Finance: In 2019, Russia will live “on its own”
Reporterin Yandex News
Read Reporterin Google News
Ad
The publication is looking for authors in the news and analytical departments. Requirements for applicants: literacy, responsibility, efficiency, inexhaustible creative energy, experience in copywriting or journalism, the ability to quickly analyze text and check facts, write concisely and interestingly on political and economic topics. The work is paid. Contact: [email protected]
Information
Dear reader, to leave comments on the publication, you must to register.
I have an account? Sign in