Volodin: Poroshenko put the world on the brink of war

December 5 2018
0
The current president of Ukraine Petro Poroshenko, in the pursuit of maintaining personal power in the country, puts the world on the brink of war. This was stated by Chairman of the State Duma of Russia Vyacheslav Volodin. 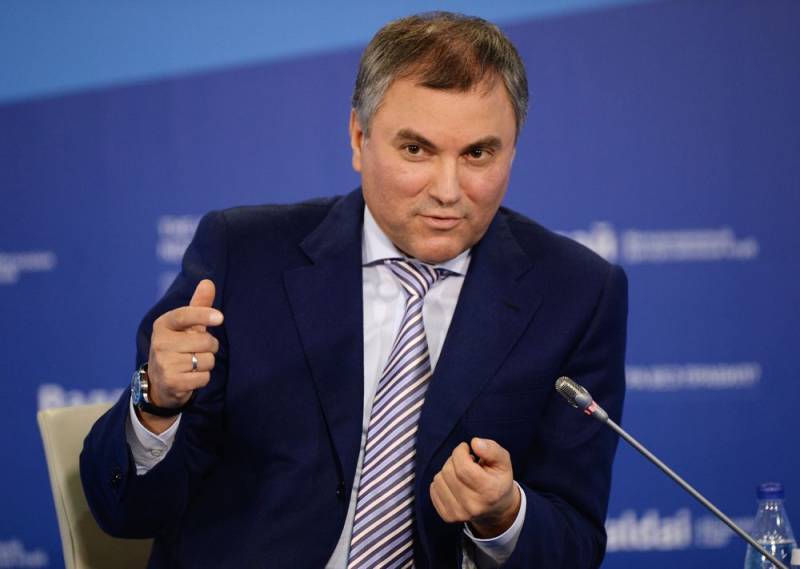 Such dictators (like Poroshenko - ed.) Have no place in Europe, and such methods can not fight for power
Volodin told reporters, commenting on the situation in a neighboring country amid the incident in the Kerch Strait that took place on November 25, 2018.

Volodin added that Poroshenko, in the pursuit of maintaining personal power, actually puts the world on the brink of war. He specified that the question whether Europeans need it, whether the European states need it, needs to be discussed again. At the same time, answering the question of a foreign journalist regarding the incident in the Kerch Strait and calls to release the arrested crew members of Ukrainian ships, Volodin noted that the incident was a planned provocation, which aims to preserve Poroshenko’s personal power.

According to the speaker of the State Duma, Poroshenko simply does not have a chance to be re-elected in a legitimate way. Currently, the rating of the current Ukrainian president is so low that he is not even included in the top three popular politicians Ukraine. Therefore, Poroshenko is doing everything to preserve his personal power by extending his office for an indefinite period in any way.
Ctrl Enter
Noticed oshЫbku Highlight text and press. Ctrl + Enter
We are
Arrested Ukrainian sailors escorted to Moscow
CIA: Jamal Kashoggi murder customer installed
Reporterin Yandex News
Read Reporterin Google News
Ad
We are open to cooperation with authors in the news and analytical departments. A prerequisite is the ability to quickly analyze the text and check the facts, to write concisely and interestingly on political and economic topics. We offer flexible working hours and regular payments. Please send your responses with examples of work to [email protected]
Information
Dear reader, to leave comments on the publication, you must sign in.