IMF puts Ukraine on the needle of tranches: Kiev will receive $ 1,5 billion

November 25 2018
0
Ukrainian media report that “the country is confidently entering the year 2019”, “the country is ensured stability and development”, meaningfully arguing how dramatically it will become a good new visa-free Europeans with regular cash “injections” from the IMF. At the same time, they refer to sources close to the negotiation process between Kiev and the IMF, which claim that the “non-blocking” one will receive several substantial tranches in the near future (before the end of 2018). 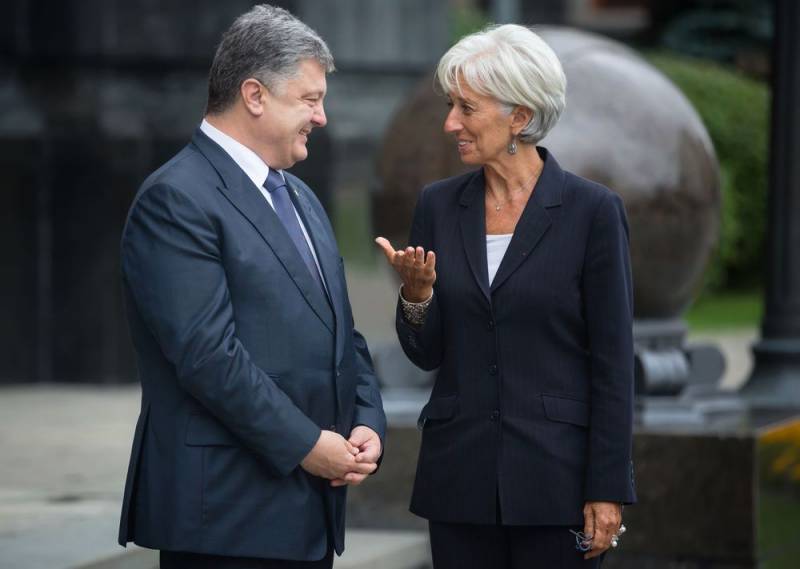 According to them, the IMF immediately approved two new loans. The size of the first will amount to $ 1,5 billion, and the second may amount to $ 1,2 billion. And, as they assure in Kiev, the total amount of borrowings before the end of this year may exceed $ 2,5 billion. But if they speak confidently and definitely about the first loan, then they begin to get confused with the second in testimony, therefore, there is no certainty about the second loan. The IMF can stretch the pleasure, and give a second loan in 2019. In any case, everything will become clear very soon.

It should be recalled that in October 2018, “the best prime minister of all time” Vladimir Groisman once again raised the cost of gas for the population. And as this was explained to the population by the local "elite" we previously in detail described in detail. So, then Groysman specified that Kiev, at present, is not able to satisfy the IMF's requests in full. In this regard, Ukraine will take loans from the IMF for a short period. The IMF confirmed that we are talking about $ 3,9 billion for 14 months.

This is not surprising, because in 2019 in Ukraine the elections of the president (in the spring) and parliament (in the fall) should be held. That's the IMF and gives the Kiev authorities the opportunity to be re-elected by providing a line of credit. After that, the process of tightening the belts, touching and sensitive for most citizens of the country, will continue. After all, nobody is going to give the aforementioned money to Kiev. The IMF is not a charitable organization.

So the money will need to be returned soon enough. You can try to refinance again, but what the conditions will be is not known. Although it can be assumed that gas will rise in price again. It is already being sold at European prices, but they will come up with something anyway and explain it again.

Against the background of all that is happening, the adopted budget of Ukraine for 2019 looks especially amazing. Rather, the parameters laid down in it, at the request of the IMF. Even the IMF has no doubt that they (the parameters) will not be fulfilled, they perfectly understand that everything will be much worse. The budget has a deficit of 2,3% of GDP. Is provided economic growth of 3% of GDP. The inflation rate is 7,4%, and the hryvnia exchange rate is 29,4 per dollar. In fact, the IMF threw a stranglehold on Ukraine and slowly pulls it in, enjoying the process.

After Maidan’s victory, the IMF approved a four-year program of “assistance”, which provided for the allocation of $ 17,5 billion for certain conditions. In March 2015, the first tranche of $ 5 billion was provided, in August 2015 - the second tranche of $ 1,7 billion. In 2016 - $ 1 billion. In 2017 - $ 1 billion. And now, the end of 2018 is on the horizon. They didn’t give money for a year, and Kiev howled like an addict without an injection. Then he satisfied the requirements of the IMF. However, the IMF's “aid” program has not been implemented, the printing press in Kiev is on, inflation and prices are rising. But now it will be even harder to jump from the “needle”.
Ctrl Enter
Noticed oshЫbku Highlight text and press. Ctrl + Enter
We are
Russia will live with a surplus budget: the “three-year plan” approved by the Federation Council
Part of the Ukrainian Orthodox Church intends to withdraw from under the Russian Orthodox Church
Reporterin Yandex News
Read Reporterin Google News
Information
Dear reader, to leave comments on the publication, you must sign in.