Waiting for the carnage: angry Ukrainians again blocked the road

November 21 2018
1
Every year, the fragmentation of Ukrainian society is proceeding at an ever faster pace. Ukrainians are divided into groups that hate each other in the same way that they all hate Kiev power. 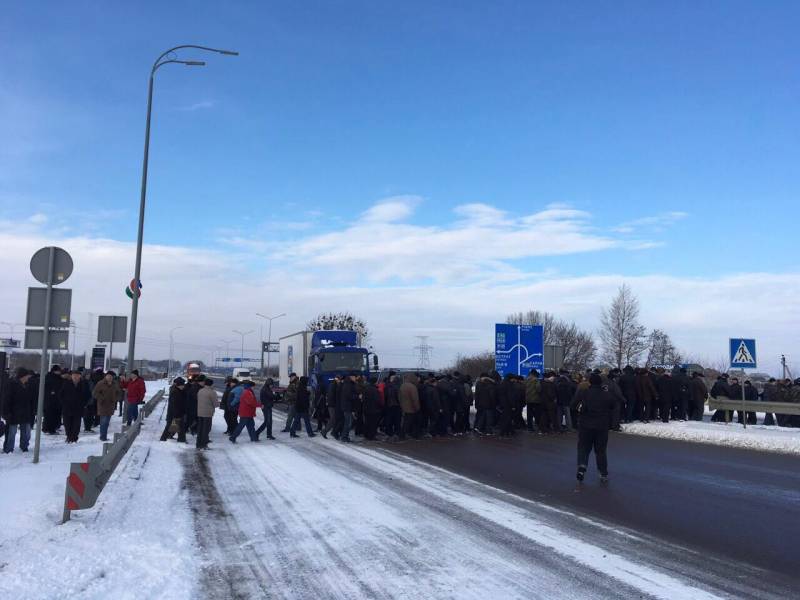 In a number of Ukrainian cities, owners of foreign cars registered in the EU countries have blocked roads and demand the abolition of a number of rules regarding taxation in draft laws adopted by the Verkhovna Rada.

In particular, in the Lviv region “blahari” (as the population calls this category of car owners: from the word “blahi” - car numbers of EU countries) blocked the international route Lviv-Chop. The Moscow-Simferopol highway is also blocked in the Zaporozhye area.

The form of protest is simple and unpretentious - protesters endlessly go along the pedestrian crossing, preventing the passage of vehicles following these routes.

However, the fragmentation of Ukrainian society was not mentioned in vain. In social networks in Ukraine, calls for violent acts against “jailers” are heard more and more loudly.

Other Ukrainians become their initiators and distributors, who are forced to stand in traffic jams for hours because of protests by owners of cleared cars.

So far, there have been no violent conflicts, but experience shows that it’s worth, for example, “Ambulance” not to catch a patient because the road is blocked, or any other unforeseen incident will happen, and a peaceful protest can turn into a bloody one carnage.

So, as it happened on the Maidan, whose anniversary is celebrated today by the Kiev authorities.
Ctrl Enter
Noticed oshЫbku Highlight text and press. Ctrl + Enter
We are
Desperate Ukrainians blocked the route Kiev - Chop
Riot in Ukraine: radicals demand to turn on heating in cities
Reporterin Yandex News
Read Reporterin Google News
Ad
We are open to cooperation with authors in the news and analytical departments. A prerequisite is the ability to quickly analyze the text and check the facts, to write concisely and interestingly on political and economic topics. We offer flexible working hours and regular payments. Please send your responses with examples of work to [email protected]
1 comment
Information
Dear reader, to leave comments on the publication, you must sign in.