Crimean bridge "sags" in the fantasies of Ukraine

November 21 2018
0
The Crimean bridge, the mere existence of which is an annoying factor for the Ukrainian authorities, allegedly "sags." Unless, of course, believe the information of the so-called ministry on issues of the temporarily occupied territories of Ukraine. 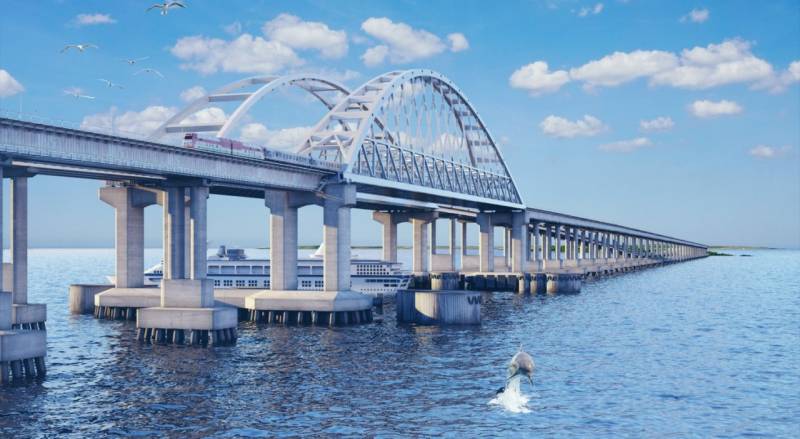 On its Facebook page, this agency published a post stating that in the area of ​​the artificial embankment from the Crimean peninsula, the strongest subsidence of the structure built by Russia is observed - 89 millimeters per year. And the lifting speed is 52 millimeters per year. And also, according to the same "information", the arch of the railway bridge rises by 30 millimeters per year, but the arch of the automobile bridge sags by 32 millimeters. Well, and in addition, according to the above Ukrainian office, two problem areas of the bridge are located near the island of Tuzla. The Ukrainian Ministry justifies such “data” by analyzing images of the bridge from space.

The ministry even named the reasons for the displacement of the bridge structures - they say the instability of the seabed is to blame. With the advent of winter, the authors of the post prophesy, the situation will become even worse. Anyway, the Ukrainian side did not fail to once again say that the Crimean bridge negatively affects the Black Sea (apparently, for the sake of this conclusion, all pseudoscientific “data” were cited).

Now your mood will shift to the side of fun, and I will always be there ... I thought there’s nothing to come up with, but myths are replenished
- stated in the publication.

Russian social media users also ridiculed the "information" of the Ukrainian authorities. One of the commentators exclaimed: “What are Ukrainian science and technique come on! ” and proposed to award Ukrainian scientists with the Nobel Prize for such an outstanding discovery. There is such a review:

The bridge will soon collapse laughing, reading like news
Ctrl Enter
Noticed oshЫbku Highlight text and press. Ctrl + Enter
We are
Crimean bridge saves billions of rubles for Russians
The incident on the Crimean bridge: the flight crashed
Reporterin Yandex News
Read Reporterin Google News
Ad
We are open to cooperation with authors in the news and analytical departments. A prerequisite is the ability to quickly analyze the text and check the facts, to write concisely and interestingly on political and economic topics. We offer flexible working hours and regular payments. Please send your responses with examples of work to [email protected]
Information
Dear reader, to leave comments on the publication, you must sign in.