November 20 2018
1
The Soviet Union was the first to launch man into space, the first to photograph the far side of the moon, his spacecraft were the first to softly moon and successfully delivered regolith samples to Earth. Unfortunately, the USA was ahead of the USSR in the lunar race, and Neil Armstrong became a pioneer on the earth's satellite. 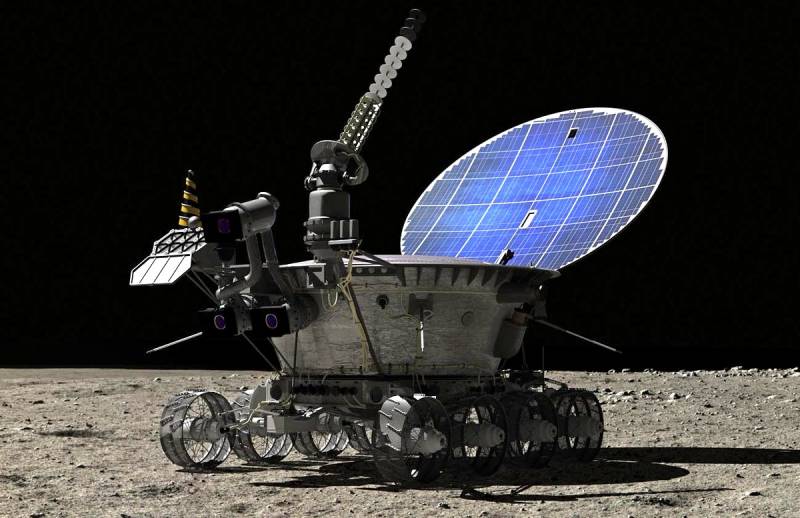 Neither Soviet nor Russian cosmonauts landed on the Moon, however, its twelve craters deservedly bear the names of researchers who have visited remotely on its surface: “Gene”, “Glory”, “Nicolas”, “Igor”, “Lenya”. “Albert”, “Kostya”, “Vitya”, “Kolya”, “Valera”, as well as “Vasya” and “Borya”. In 2013, the operators of the Lunokhod-1 and Lunokhod-2 projects and the head of the scientific group Boris Nepoklonov were awarded this honor.

In the 60s and 70s, the main efforts of the USSR to study the moon were focused on the use of automatic spacecraft in the framework of the so-called Program “E”. Mobile research devices with remote control were encrypted in it as a project E8. Soviet moon rovers became the scientific answer of the United States after the meaning in the manned launch disappeared. The task set for the developers was incredibly difficult. The devices had to work in extreme conditions of vacuum, temperature extremes and moon dust. In this case, the lunar rover had to be controlled from the Earth. The main requirement of the Queen was reliability. Too many unknown parameters could lead to the failure of the systems, so initially no one expected to run over the lunar surface for more than 10 kilometers.

Neither the Design Bureau of the Kirov Plant nor NATI decided to undertake the development of a chassis for such an apparatus. As a result, the team of Alexander Kemurdzhian from VNII-100, under the general leadership of Georgy Babakin, became the main developer. The unique research apparatus obtained by Soviet scientists was far ahead of its time. Each of its eight titanium wheels was equipped with its own drive and an unlocking system in case it got stuck in moon dust. In addition to the instrument compartment, a retractable solar panel was installed on the Lunokhod-1 chassis for recharging.

The second task was to develop an effective control system for the device at a distance of about 400 kilometers. The signal from Earth to the Moon goes in 000 seconds, Technology of that time did not allow the operators of lunar rovers to receive a television picture. Instead, crews on Earth saw black and white frames replacing each other with a delay of 3 to 20 seconds. It is this circumstance that determines the extremely low speed of the research machine. The crew of the lunar rover totaled 5 people. To control the devices, in the conditions of strictest secrecy, 11 specialists were selected. At that time, they were written about them like this:

These are young, fit guys in blue elegant suits of sports cut with badges on the lapels of their shirts - ruby ​​pentagons with embossed letters of the USSR.

Lunokhod-1 traveled to the surface of the Earth’s satellite on November 17, 1970 in the area of ​​the Sea of ​​Rains. It was believed that the device will last 3 lunar days, equal to three earth months, however, it really worked for 11 lunar days. During this time, he transmitted 25 thousand frames and more than two hundred panoramas. Lunokhod-2 failed earlier than expected due to an unfortunate set of circumstances. During the overcoming of the crater, its cooling radiator was covered with ubiquitous dust, because of which the battery charge dropped, and the device “fell asleep”.

Two moon rovers remained on the earth's satellite as a monument to the great Soviet science, which was much ahead of its time.
Ctrl Enter
Noticed oshЫbku Highlight text and press. Ctrl + Enter
We are
Why is the moon still not owned by the Americans?
Russian nuclear engine will not leave a chance for Ilona Mask
Reporterin Yandex News
Read Reporterin Google News
Ad
We are open to cooperation with authors in the news and analytical departments. A prerequisite is the ability to quickly analyze the text and check the facts, to write concisely and interestingly on political and economic topics. We offer flexible working hours and regular payments. Please send your responses with examples of work to [email protected]
1 comment
Information
Dear reader, to leave comments on the publication, you must sign in.