Putin behind Trump concludes alliances dangerous for the USA

November 18 2018
1
Where is the world heading? Under such a flashy headline, one could call an article that was published on one of the leading English-speaking news Business Insider portals. The hysteria lies in the fact that Russian President Vladimir Putin is actively forging relations with the states of the Asia-Pacific region, and thereby harms the United States. 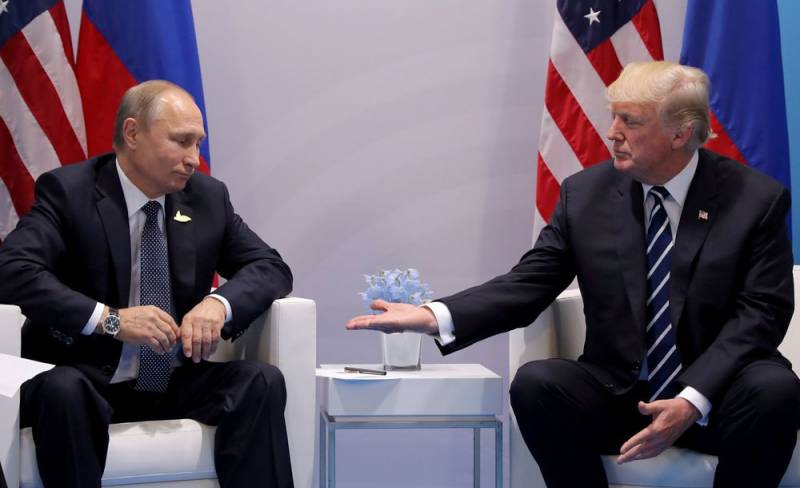 And hints of recent communication Heads of Russia and Japanese Prime Minister Shinzo Abe in Singapore and Arrangements Moscow, with Tokyo and Seoul in Papua New Guinea, can be traced very clearly. And the blame for everything, according to the publication, is the current President of the United States Donald Trump, who withdrew from visiting various summits in this region of the planet, refusing to go there. Then all the cameras in the world were chained to Russia, which is a great success for Moscow. And Business Insider, in this regard, has no limits to indignation.

Business Insider, out of modesty, does not specify whether someone could dissuade or forcefully hold Trump in the Oval Office of the White House and did not allow him to go there, maybe he really has something to tell and what to offer. But the publication reports on the new tactics of Russia, the main message of which is to change priorities. Since things are not going well with the West, Moscow will cooperate with the East. After all, the Asian market is enormous, and Russia already has a certain weight on it, although it has arrived late in this region.

For example, at the dawn of the presidency of Bark Obama, the United States declared Asia its “cornerstone” policy. Therefore, he regularly attended such events. And this is not surprising, because China, India and Japan are very powerful and influential players at the international level. But there are other rapidly developing and very promising countries.

Experts of the publication, in a favorite manner, emphasize that the Kremlin’s success is due to the fact that many Asian states have become more authoritarian, therefore they understand and communicate more closely with Moscow, and not with the stronghold of global “democracy”. And more and more states want to pursue a more independent foreign policy and are not ready to entrust their future with only one hand. At the same time, Trump’s policy under the slogan “America comes first!” sends conflicting signals, and his personal absence exacerbates the situation.

So Putin took the opportunity and behind the back of Trump began to enter into alliances dangerous to the United States. However, Business Insider did not specify what exactly they mean by “dangerous alliances”, as expressed in this. But there has been significant progress in relations between Russia and a number of countries in the region. The publication is very concerned about the growing friendship between Moscow and Beijing. Stable good relations between Russia and India and Vietnam. And it’s just horrified that the Philippines, the former US colony, thought about serious military-technical cooperation with Russia.

The publication concludes that Putin has widely opened the doors to Asia and is guided not by geopolitics, but economic interests. In general, Moscow is trying not to interfere in local conflicts and in the internal affairs of states, and this helps it build up its influence and authority. In turn, Washington, albeit cautiously glancing at Moscow’s activities in Asia, considers Beijing its main adversary.
Ctrl Enter
Noticed oshЫbku Highlight text and press. Ctrl + Enter
We are
Tokyo and Seoul become interested in Russian digital infrastructure
When peace will be made between Japan and Russia: expert opinion
Reporterin Yandex News
Read Reporterin Google News
Ad
The publication is looking for authors in the news and analytical departments. Requirements for applicants: literacy, responsibility, efficiency, inexhaustible creative energy, experience in copywriting or journalism, the ability to quickly analyze text and check facts, write concisely and interestingly on political and economic topics. The work is paid. Contact: [email protected]
1 comment
Information
Dear reader, to leave comments on the publication, you must to register.
I have an account? Sign in