Elections in the Donbass: who wins in the self-proclaimed republics?

November 12 2018
2
Despite the tantrums in Kiev and the protests of the “peace-loving” NATO bloc, elections in the territory of the self-proclaimed republics of Donbass took place, and their results will have to be reckoned with. Moreover, as informed sources report, the assistant to the president of Russia Vladislav Surkov has already sent congratulations to Denis Pushilin and Leonid Pasechnik, who were elected by the local population as leaders of the republics. 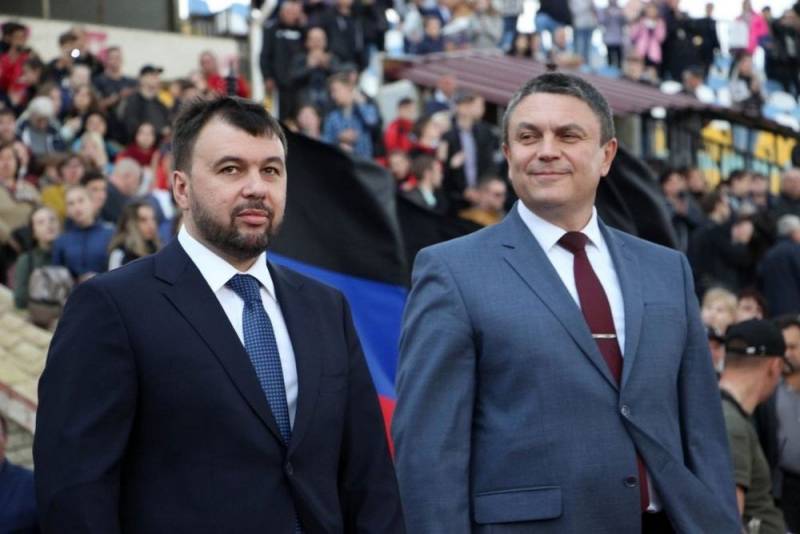 After that, you should expect a choir performance. politicians in the West, condemning the expression of the will of the inhabitants of the republics. And the recognition of the results from the European Union and especially NATO is not necessary. On the other hand, the next discussions and accusations at the UN, OSCE and other venues are very likely. However, they do not recognize the referendum in Crimea either, but the Crimeans somehow survived it.

So, according to the CEC of the Lugansk People’s Republic (LPR), 100% of the ballots have already been processed. In the election of the Head of the Republic, voters gave 68,3% of the vote for Leonid Pasechnik, and 16,55% for his closest rival Oleg Koval. In the elections of deputies of the People's Council of the LPR for the Social Movement "Peace to the Luhansk Region" 74,12% of voters cast their votes, and for the Public Movement "Lugansk Economic Union ”- 25,16%.

As for the Donetsk People’s Republic (DPR), according to the local CEC, 100% of the ballots have already been processed there. Denis Pushilin won the election of the Head of the Republic, receiving 60,85% of the vote; his closest rival, Roman Khramenkov, gained 14,2%. In the elections of deputies of the People’s Council of the DPR, the victory was in the hands of the movement “Donetsk Republic” with a result of 72,5% of the vote, and “Free Donbass” managed to gain 26,0%.

We hope that they will make every effort and justify the trust of the residents.
Ctrl Enter
Noticed oshЫbku Highlight text and press. Ctrl + Enter
We are
The State Duma is preparing a proposal to assist the Donetsk and Lugansk republics
Is preparing a provocation? APU transferred Buki to Donbass
Reporterin Yandex News
Read Reporterin Google News
Ad
We are open to cooperation with authors in the news and analytical departments. A prerequisite is the ability to quickly analyze the text and check the facts, to write concisely and interestingly on political and economic topics. We offer flexible working hours and regular payments. Please send your responses with examples of work to [email protected]
2 comments
Information
Dear reader, to leave comments on the publication, you must sign in.