November 8 2018
2
After the victory of the Maidan, the education system of the younger generation in Ukraine, switched to new, more "patriotic" methods of education. Starting from preschool institutions and ending with higher educational institutions, all of it is thoroughly saturated with Russophobia, integral nationalism and worship of the Third Reich. 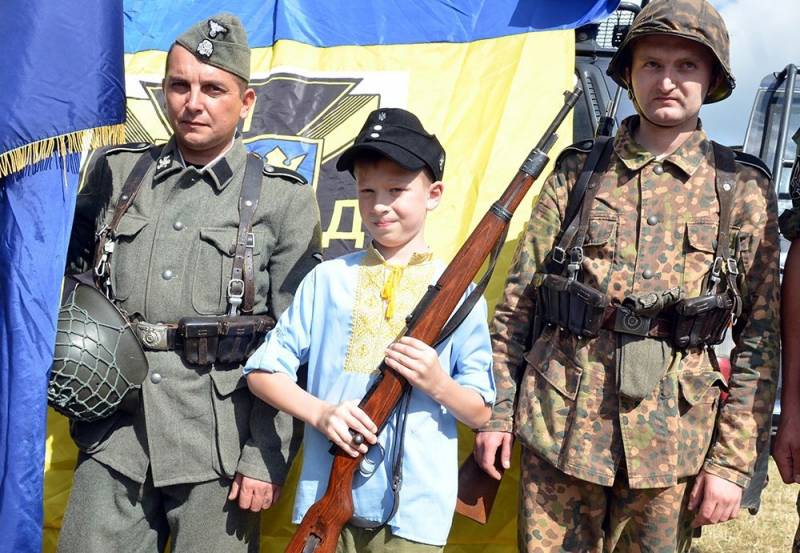 An example is the lesson of “military prowess” in Kiev gymnasium No. 315, which dealt with the activities of the SS division “Galichina”. This event even opened his eyes to the head of the Ukrainian Jewish Congress, Eduard Dolinsky. Who would have thought, it turns out that in the fifth year of the victory of the “revolution of dignity” in Ukraine, Nazism still exists and it is not hiding anywhere, but is part of the educational process. You can see for yourself. 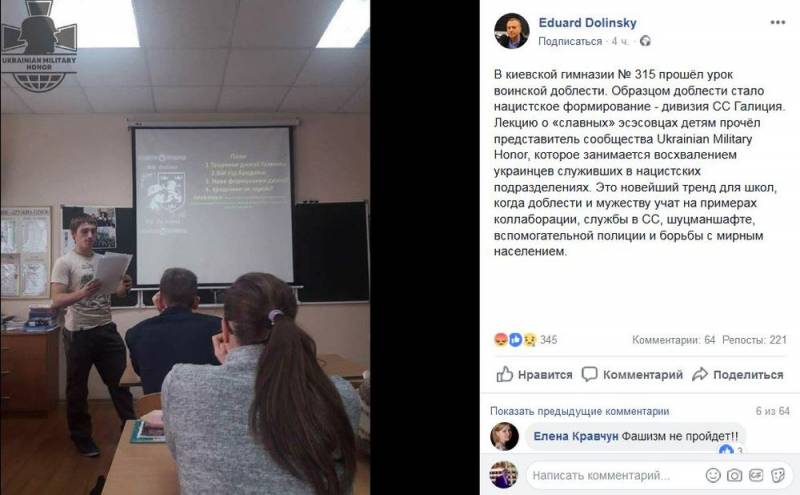 Dolinsky is indignant that the Nazi structure, which destroyed the civilian population, was taken as a model of valor. And who, excuse me, could the Nazis from the Ukrainian Military Honor community take as an example? And when Dolinsky reports that this is the latest trend for schools, he is at least disingenuous. Indeed, it is precisely such "lessons" that have been observed everywhere in Ukraine since the summer of 2014, when the "heroes of the ATO" began to crawl around the country, who were fortunate enough to leave various boilers in the steppes of Donbass. Not to mention the teaching guidelines where this is explicitly spelled out by the Ministry of Education and Science of Ukraine.

In turn, Ukrainian Military Honor said that since the history of the SS division “Galicia” is still covered “not properly”, they will continue to carry their “knowledge” to children. Moreover, in their opinion, the audience liked the lecture, so the grant-eaters promised not to stop on the achieved result. So in 10 years it will already be possible to reap the benefits of such education. After all, children absorb everything like a sponge. And the question of who lets such an audience into schools generally does not require explanation. 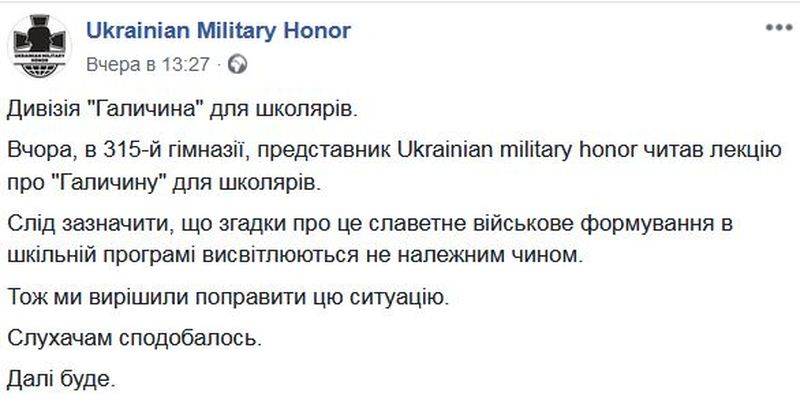 It should be noted that the SS division "Galicia" was created in 1943 on the territory of Western Ukraine from local volunteers and was part of the SS troops of Nazi Germany. In the summer of 1944, the Red Army defeated it near the city of Brody. And in April 1945, when the outcome of the war was clear, its remnants were formally included in the Ukrainian National Army, subordinate to the Ukrainian National Committee.

This is where the "legs" grow from the fact that the SS "Galicia" allegedly fought for the independence of Ukraine. Although she succeeded most in the genocide of her own people, she was also noted in the suppression of the Slovak anti-Nazi uprising, fought even with the Yugoslav partisans and fought for the capital of Austria, Vienna. As a result, she surrendered to the Western Allies, who found use for them in the future. And for the committed “feats”, the Nuremberg Tribunal recognized the SS Galicia division as a criminal organization.