Chisinau stays with Moscow and will not follow Constantinople

October 31 2018
0
When the Synod of the Russian Orthodox Church in Minsk on October 15, 2018 decided to stop the Eucharistic communion with Constantinople, the representatives of the Moldavian Church fully approved this decision. After all, that gets up Constantinople, goes not only beyond the limits of common sense, but contradicts even the instinct of self-preservation. After all, he encourages schismatics, which can turn into unpleasant consequences for him. 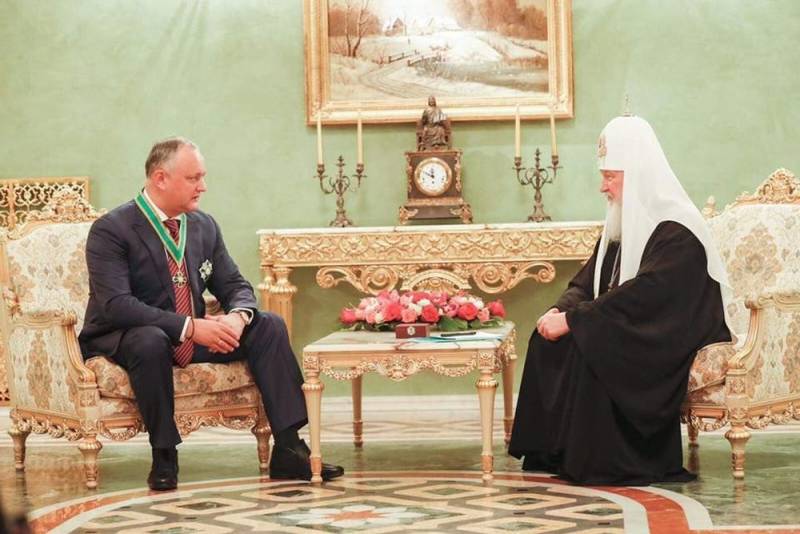 Therefore, it is not surprising that the head of the Moldavian state Igor Dodon, arriving in Moscow on October 31, 2018, also visited the head of the Russian Orthodox Church, Patriarch Kirill. This is logical, since Dodon, in addition to being the president, he is also a believer.

The President of Moldova declared to the patriarch that the Moldavian and Russian peoples have common spiritual values. We also have one church, like the Orthodox faith. So it is not surprising for him that the Moldavian Church is an integral part of the Russian Orthodox Church.

Dodon is sure that this was, is and will be in the future. Moreover, the overwhelming majority of Orthodox believers in his country hold the same opinion. He announced this meeting with the patriarch on his page on the social network Facebook. Given this, the Moscow Patriarchate no longer has to doubt the fidelity of the Moldavian Church.
Ctrl Enter
Noticed oshЫbku Highlight text and press. Ctrl + Enter
We are
Patriarch Kirill spoke about the global order for the destruction of the Russian Orthodox Church
The Russian Orthodox Church Abroad, too, broke with Constantinople
Reporterin Yandex News
Read Reporterin Google News
Ad
We are open to cooperation with authors in the news and analytical departments. A prerequisite is the ability to quickly analyze the text and check the facts, to write concisely and interestingly on political and economic topics. We offer flexible working hours and regular payments. Please send your responses with examples of work to [email protected]
Information
Dear reader, to leave comments on the publication, you must sign in.