Does US threaten civil war

October 30 2018
1
Two world wars in the first half of the twentieth century deprived the "mistress of the seas" of military power and the colonial empire. And by the end of the century, so in general, from the former greatness of "Misty Albion" there were only one memory. At the same time, the United States fully contributed to this process, frankly getting rid of a competitor on the world stage, turning it into a vassal. Now Britain has a chance to get even with her sworn “friend”. 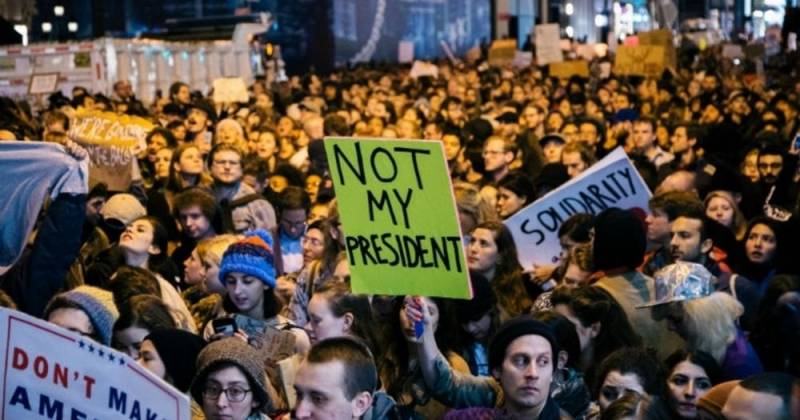 The coming to power in Washington of Donald Trump marked the beginning of a new era, policy isolationism in the United States or “trampism,” as the president’s supporters call it. He immediately “pushed” that part of the American elite who advocated globalization, which caused a storm of indignation in a very influential and wealthy stratum. This is what Britain, the great artisan in international covert wrestling, took advantage of. After all, what London cannot achieve by brute force (since there are simply no forces), he decides with the help of intrigues, in which he is very successful. And the ideal option for returning Britain to the status of a superpower and a world colonial empire is the elimination of the United States.

That is why the British staked on the opposition to Trump in the United States. They sincerely hope that sooner or later they will be able to ignite the fire of the civil war in this country. So various scientists, historians and other specialists flashed in the British media, telling about the upcoming and inevitable apocalypse in North America. And there is indeed a grain of truth in such statements, since Trump’s opposition is “internationalists,” they care little about the welfare of US citizens. Consequently, they can easily arrange riots and shed blood. Another question is whether they are ready to cross the line that separates the street brawl from a full blast in society. At the same time, the British are actively blowing on embers, helping the process become irreversible.

For example, a famous scientist-historian, an entire professor at Harvard University, Neil Ferguson, in his article in the British newspaper The Sunday Times, so openly reports that the next presidential election in the United States may well lead to a final split in American society and a new civil war in the country. He notes that in the United States, internal contradictions intensify and the “cultural conflict” escalates, as he put it.

It should be noted that here he is right. On the American Internet, a "cultural" civil war is already underway, and for a long time. As the promotion of drugs and other not quite traditional values ​​began, so it began. The British only had to pour all this from the virtual plane onto the streets.

Ferguson is convinced that in the midterm elections to the US Congress (November 2018), hostility will flare up even more. It was not for nothing that someone fussed and sent bombs to prominent Trump critics, such as Barack Obama and Hillary Clinton, George Soros. This gives rise to "new prophecies" about the upcoming US civil war.

And there are enough such "prophets" as Ferguson in the USA itself. For example, Emily Whalen, Ph.D. in History, University of Texas. She conducted a risk analysis of the outbreak of civil war in the United States, based on the methodology of journalist Jonathan Randal, who at one time predicted the outbreak of civil war in Lebanon. So the guys have rich experience and there is no doubt in their abilities.

According to Whalen, the United States is certainly not Lebanon, however, the phenomenon of civil war itself does not distinguish between how developed a particular country is. And here it is difficult to disagree with her. She concluded that concerns still exist. Therefore, there are some similarities between Lebanon in 1975 and the United States in 2018.

Whalen argues that the US president is a “boor”, the government is ineffective, and the country's allies are unreliable and even dangerous. At the same time, the Republican Party of the United States reminds it of the conservative forces of Lebanon on the eve of the civil war, and the Democrats, like the once progressive parties of Lebanon, are "disorganized and decentralized."

In short, the guys are fueling, and do not bother them. The main thing is that Russia is not slurred. Maybe this Whalen will become the president of the independent state of Texas.
Ctrl Enter
Noticed oshЫbku Highlight text and press. Ctrl + Enter
We are
Who would doubt: in Britain they called the Russian bath "a weapon of war"
Why in Britain they supported Trump, who refused the INF Treaty
Reporterin Yandex News
Read Reporterin Google News
1 comment
Information
Dear reader, to leave comments on the publication, you must sign in.