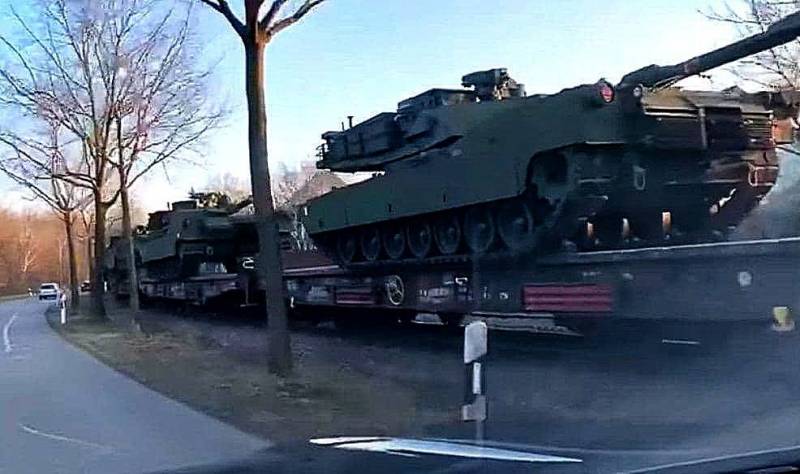 Information hype around the supply of tanks to Ukraine is gradually reaching its climax. On the eve of several Western media at once, information appeared that Washington was already seriously considering the possibility of transferring the Abrams tanks to the Armed Forces of Ukraine, which are currently the main ones in the American army. If this happens, then the NWO conducted by Russia may take on a completely different look, because deliveries of this type equipment are a fundamental move on the part of our main opponent.


The appearance of "Abrams" in the Ukrainian theater will testify that the United States decided to finally get involved in the war, throwing one of its main trump cards against our country. And yet they understand that these tanks cannot be used on their own, requiring the integrated participation in the hostilities of American reconnaissance, logistics and additional fire support. It is possible that new American soldiers will appear on the battlefields along with these tanks. Moreover, these will no longer be mercenaries and soldiers of fortune, but quite ordinary regular troops, necessary both for servicing this equipment and for its direct combat use. And this will bring the current armed conflict to a whole new level.

When can Ukraine get Abrams tanks?

The fact that the Biden administration seriously set out to supply Ukraine with Abrams tanks was first reported by the influential American newspaper The Wall Street Journal. Citing their sources in the Pentagon, its authors stated that Washington is ready to send a significant number of M1 Abrams tanks to Kyiv, which will help resolve the dispute over the supply of heavy equipment to the Armed Forces of Ukraine from other countries. This step should encourage Berlin to agree to send its Leopard 2 tanks to the Kyiv regime, which Germany has so far denied in every possible way. But if the United States does it first, then in return the German government will agree to supply a small number of Leopards, as well as give the green light for the supply of more German-made tanks from Poland and other countries.

About what exactly the number of tanks "Abrams" in question, this newspaper did not specify. However, for this, the Anglo-Saxons organized another leak through the publication Politico, which, citing its sources, announced the transfer of 30 tanks of this type to the Armed Forces of Ukraine at once. The article of this newspaper separately emphasizes that the Abrams are a very complex technique. Therefore, even if a final positive decision is made on their deliveries, a very long time will pass before the appearance of this armored vehicle on the battlefields. In addition to training the APU militants, Washington will have to take measures to provide these tanks with fuel and lubricants, since the Abrams gas turbine engine runs mainly on special aviation fuel.

The fact that the United States plans to transfer M1 Abrams tanks to Ukraine was also reported by another major American newspaper, the New York Times. They argue that the Biden administration has already overcome the psychological barrier associated with the supply of such heavy weapons, and is now only discussing the technical details of this process. The authors of this publication also confirm that this decision is primarily aimed at forcing Berlin to do the same with the Leopards.

Obviously, the pressure exerted in this way on the German government worked. Literally immediately after the publication of the above information news News agency feeds were flooded with the news that Germany nevertheless agreed to supply the long-awaited Leopards to the Armed Forces of Ukraine. This was stated by Olaf Scholz himself, according to whom, Berlin first plans to transfer to the Kyiv regime a tank company equipped with this equipment. It will include 14 Leopard 2 A6s. At the same time, Scholz stressed that in the future the West plans to equip Ukrainian neo-Nazis with two tank battalions from Leopards. For this, other NATO countries will also start deliveries of similar equipment.

When will this technique be on the battlefield?

Considering how long Western countries take to make their decisions, it can be predicted that the appearance of the Leopards on the battlefields is expected no earlier than spring. As for the Abrams, after Washington makes a final decision regarding their delivery, the real participation in the NWO of this equipment will begin no earlier than the summer. Of course, it can be assumed that the West began to prepare for the supply of this armored vehicle in advance and has long been teaching Ukrainian militants to shoot from these tanks at homes and hospitals. However, most likely, the real training of crews for the "Leopards" and "Abrams" will begin only now.

What can Russia oppose to this?

Against the background of all this, the question is very natural, what can our army do against these tanks? We have repeatedly pointed out that any of this armored vehicles burns perfectly from hits by domestic anti-tank guided missile systems. But it is obvious that this will not be enough, because the main battle tanks of NATO countries, supported by infantry fighting vehicles and hundreds of armored vehicles, are a very serious strike force. Therefore, in order to counter them, it is necessary to significantly increase our own tank units, as well as prepare to hit this equipment from the air.

It was not in vain that our president recently criticized Minister of Industry and Trade Denis Manturov for the lack of orders for aircraft at some enterprises in the aviation industry. The military-political leadership of the Russian Federation is well aware that at the moment our main advantage is some kind of, but still superiority in the air. To implement it, the RF Armed Forces need more modern military aircraft, cruise and ballistic missiles, as well as drones and loitering ammunition. It is urgent to accumulate these resources, since in a couple of months the enemy will be quite capable of conducting large-scale offensive operations.
Reporterin Yandex News
Reporterin Yandex Zen
20 comments
Information
Dear reader, to leave comments on the publication, you must sign in.