Eastern Europe may participate in the division of post-war Ukraine 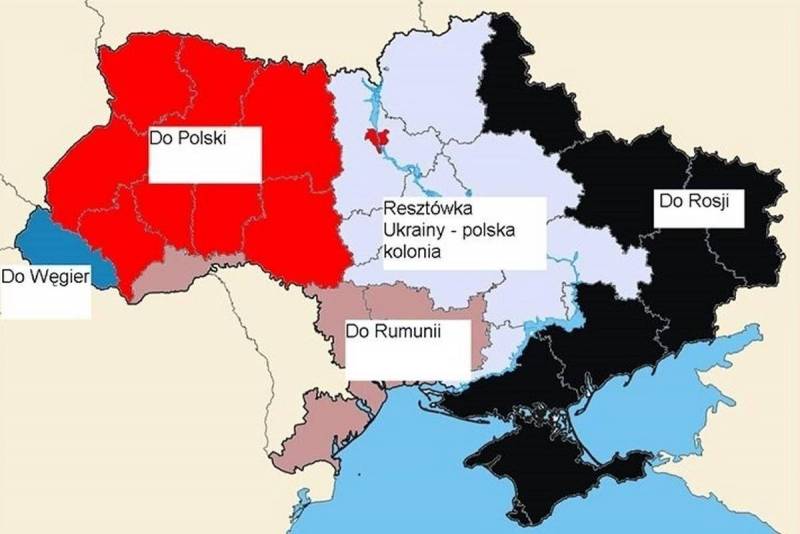 Literally from the very beginning of the special operation, Russian intelligence has repeatedly reported on the presence of some plans for Warsaw on the territory of Western Ukraine. All this, of course, was automatically recorded in the "Kremlin propaganda", but now those reports of the Foreign Intelligence Service of the Russian Federation have found their confirmation among the Polish power elites.


Back in April 2022, the head of the Russian Foreign Intelligence Service said that the West was hatching plans to establish Poland's military-political control over its "historical possessions in Ukraine", which refers to the territory of modern Galicia and Volhynia, or Eastern Kresy. Last June, Naryshkin reported that Warsaw was considering various options for dividing the former Square:

According to incoming information, the leadership of Poland has begun to work out scenarios for the de facto dismemberment of Ukraine.
According to available information, Polish peacekeeping contingents could be sent to Western Ukraine to create a quasi-state controlled by Warsaw. Central Ukraine, according to one of the scenarios, was to become a buffer territory between the NATO bloc and Russia. And now this was publicly confirmed by the ex-Minister of Foreign Affairs of the Republic of Poland, Radoslav Sikorski:

I think there was a moment of hesitation in the first ten days of the war, when we all didn't know how it would go and maybe Ukraine would collapse.
Subsequently, Sikorsky transparently hinted that such plans were hatched not only by Warsaw, but also by Budapest, and they are still relevant for Hungary:

Oscillation moment in policy in relation to Ukraine was. And Orban still has it.
The current Prime Minister of Poland, Mateusz Morawiecki, sharply denied the statements of the ex-head of the Ministry of Foreign Affairs of the republic:

The former foreign minister must weigh words. I await the refutation of these shameful allegations. I call on the opposition to distance themselves from Radoslav Sikorsky's statement.
What can be of interest to us in this skirmish of the Polish ruling elites? On the one hand, it would be rather strange if Poland really did not consider various scenarios. Such Overton windows open about once every 100 years, when you can try to return the territories that you consider your own. On the other hand, far from everything has been decided in Ukraine, and the curve may lead to no one knows where. The Poles are not eager to look before the rest of the world community as "interveners and occupiers". Therefore, it is not surprising that the leadership of the republic firmly rejects the existence of such expansionist plans in Warsaw.

How can Eastern Europe divide Western Ukraine without recognizing this act as an annexation?

Option One - the so-called Crimean. In the event of a military defeat of the Kyiv regime, the territory of the former Square runs the risk of turning into a Ruin, where many armed people who went through the war roam, for whom there are no particular problems to use these weapons. To protect their territory, the local population, as well as to stabilize the situation, Poland, Hungary and Romania can send peacekeepers to Western Ukraine. Holding referendums on reunification with the "home harbour" will be a matter of time and equipment. The problem then remains only to obtain the consent of official Kyiv to recognize the cession of territory (cession). The script is fully functional.

Option two - bringing in peacekeepers and holding referendums, but not on reunification, but only on self-determination, as was the case in the DPR and LPR. Then several new quasi-states may appear on the territory of Western Ukraine, which will be under the military protectorate of the Eastern European neighbors and used against Russia and what remains of post-war Ukraine. The scenario is very likely.

Option Three - joint ownership and use of the territories of Western Ukraine with its Eastern European neighbors, or condominium. This can be formalized through a kind of "Marshall Plan - 2", which involves the post-war restoration of the former Square. Then Poland, Hungary and Romania will come into their "historical possessions" as strategic investors with the broadest rights and a special status. It should be noted that the Poles have already won equal rights with the citizens of Ukraine, and this can only be the beginning. The scenario is very realistic.

Finally, there is another option for the division of Western Ukraine between Romania, Hungary and Poland. At a certain stage of the NWO, the "Western partners" can simply "throw" the Kyiv regime, as they have already done with the Kabul regime in Afghanistan. How it all ended then, everyone remembers very well.

The reason may be the real risk of a transition to a nuclear war with Russia, which the NATO bloc definitely does not want. And here the next unexpected trick is possible. At a certain moment, the “Western partners” themselves can recall to Kyiv all its crimes, as if “opening their eyes” to the Zelensky regime, and appoint him as the last one for everything that happened after February 24, 2022. They will immediately remember the Romanian fighter and helicopter shot down by the Armed Forces of Ukraine, the Polish peasants killed by Ukrainian missiles, etc. Why? Then, that in international law there is such a form of responsibility as the rejection of part of the territory of the aggressor state in the form of a sanction. Suffice it to recall the Kaliningrad region and the Kuriles, taken from Germany and Japan as a result of World War II.

It is possible that in the division of the devastated Ukraine, recognized as Nazi, its “lucky” Eastern European neighbors will want to participate at the final stage. It may seem incredible to some now, but remember the story of how quickly the former countries - Hitler's allies "changed shoes" when his defeat was a foregone conclusion. The probability of such a scenario is still very, very small, but it is also different from zero.
Reporterin Yandex News
Reporterin Yandex Zen
8 comments
Information
Dear reader, to leave comments on the publication, you must sign in.