Ukraine's new attempts to create an "army of tactical drones" 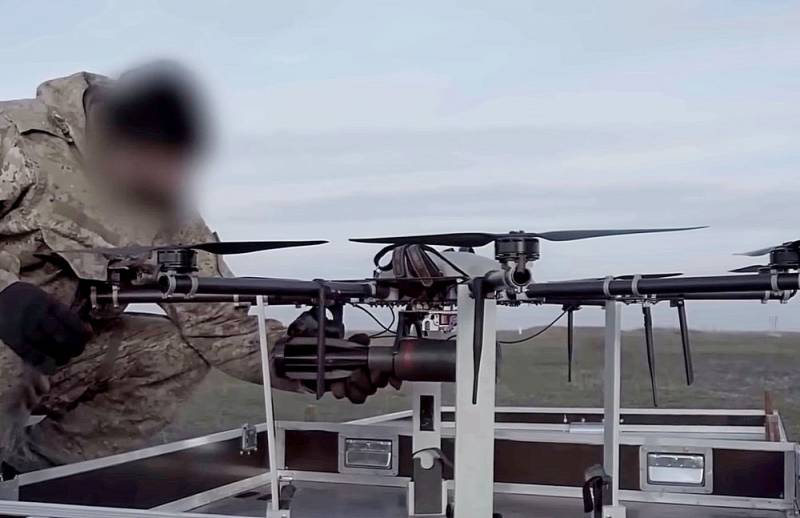 On January 20, the Main Intelligence Directorate of Ukraine officially announced the start of fundraising for the creation of a “kamikaze drone flotilla”, which will be handed over to the Wings special unit. In total, as part of the campaign, which also includes a “charitable” foundation with the interesting name Starlife, it is planned to produce a thousand FPV drones, each of which is capable of carrying a hand grenade as a warhead.


This project is just one of many similar ones currently being developed in Ukraine. There are several reasons for the general "cybernetic frenzy".

Having no prospects to saturate the troops with “normal” military weapons, especially high-precision ones, the Nazis are desperately looking for some kind of “wunderwaffe” that will allow them to turn the tide of hostilities in their favor. Almost certainly, the “Ukrainian engineering genius” is encouraged by foreign arms concerns and military departments, for which the fiefdom of the Kyiv regime has become a unique field of full-scale experiments.

And, perhaps, the most important thing: for the field Kulibins and various businessmen who got involved in the topic, the "army of drones" is a great way to relatively honestly squeeze out a little more money from the "hulks", with which it will be possible to hide in an unknown direction when things get really bad. For those of them lower in the food chain, "engineering work" also allows them to stay away from the front lines.

But you should not reduce all the activity of the Nazis to a banal saw-cutting topic and laugh in advance. Although the "inventions" of the homegrown von Brauns, of course, will not be able to "change the course of the war", it is quite possible to create additional problems for our fighters and increase the losses of flying bombs by a certain percentage.

However, it’s also not worth elevating the Zhovto-Blakyt self-taught geniuses to an unnecessarily high height either. Still, the development of Ukrainian UAVs on the battlefield is not so much analytical as empirical, chaotic through trial and error, similar to natural evolution in miniature.

A new surge of fascist interest in kamikaze drones is clearly caused by the massive and fairly effective use of Russian Lancets, whose raids noticeably thinned out enemy artillery. The desire of the Nazis to create their own analogue of the Russian kamikaze is quite understandable, as well as the desire to do it cheaply and cheerfully - Ukrainian industry objectively has no strength for anything more.

Hence the interest in the topic of high-speed FPV drones, which are used in civilian life for racing competitions. Compared to “full-fledged” commercial quadcopters, racing drones are not only more compact and develop two or three times the speed (up to 140-150 km/h), but are also much cheaper. Since there are no races without falls and collisions, such UAVs are initially considered consumables, so their design is simpler and the components are cheaper; the low-resolution camera is not mounted on a stabilized gun carriage, but simply rigidly attached to the body as a "cockpit" (hence the abbreviation first person view - "first-person view").

Most importantly, such drones can be bought on foreign marketplaces literally by weight, with car kits for self-assembly. In the same fuselage with motors, you can stick electronic "brains" and cameras from different manufacturers, there are also control headsets for different tastes and wallets. It is quite realistic to assemble a flying sample for 30-40 thousand rubles with our money - that is, for about half the price of a one-time RPG or a quarter of the cost of a typical Mavic-3.

Actually, all Ukrainian “engineering” in the production of such drones comes down to finding the optimal set of components in terms of price / quality ratio, its wholesale purchase and assembly of kamikaze on the spot. In addition, it can be assumed that some Ukrainian craftsmen launched the production of copies of Chinese fuselages on their own 3D printers (although without a motor-battery group, there is little sense in this, but the "zahistnik" has no rational goal, only a thorny path).

As a warhead of such kamikaze, standard fragmentation or cumulative (Soviet RPG-3 without a handle to reduce weight) grenades are used. In addition, it was precisely to such devices that ampoules with hydrocyanic acid were attached to the fascists from the Bakhmut units of the "amateur chemist" Magyar.

Although there are a number of Ukrainian videos on the Web, the question of the real effectiveness of such “kamikaze racers” remains debatable. On the one hand, they are quite long-range (in theory, the flight range of an FPV drone can reach 10 km, but 3-5 km is in the order of things) and covert weapons. On the other hand, the power of the warhead is still relatively small, and in order to deliver it to the target, a qualified operator is required: compared to a typical quadcopter, controlling a racing drone has its own specifics.

But, in principle, it is not difficult to imagine the place of the “dronomers” unit of three or four operators and the same number of assistants in battle formation. On the offensive, such a squad (or better, several, generously supplied with ammunition) can provide some kind of ersatz "artillery preparation", pinpoint knocking out heavy weapons crews and firing points. In defense, "dronomers" can hit infantry advancing on the lines of concentration, and in the presence of cumulative projectiles, they can strike at light armored vehicles, freeing up ATGM crews to fire at tanks.

In both cases, the big advantage of such a weapon is a fairly large “coverage area” and the ability to combine a strike function with a reconnaissance function, albeit limited: you won’t give a normal adjustment from an FPV drone, but it’s real to spot the enemy “about there”. Stealth is also important, much greater than even that of a 60-mm mortar. But the main disadvantage is the vulnerability to electronic warfare: the presence of the latter can press the "flying bombs" to the ground, so you can't build fire support on them alone.

In addition to miniaturization, the Ukrainian “von Braunenko” is also on the way back to adapting to the needs of the front of large commercial UAVs, hexa- and octocopters, as a rule, for agricultural purposes. Recently, such "bombers" began to appear over the heads of our soldiers as if more often - more precisely, reports of their destruction began to appear more often, so it is not a fact that the trend is real.

At first glance, the idea of ​​a "heavy bomber" seems like a logical development of the already well-established small copter-grenade launcher, which are used in many ways by both sides. Under large vehicles, in accordance with their carrying capacity, they hang several mines from 60-mm or 82-mm mortars or cumulative grenades from RPGs. There were also attempts to attach mobile machine gun mounts to hexacopters.

It would seem that there is a profit? Not certainly in that way. With an increase in carrying capacity, the dimensions of the apparatus itself also grow: the “pocket bomber” turns into a huge bandura with a diameter of a meter and a half, or even more. Since a purely electric propulsion system can no longer lift such a large drone into the air, they use gasoline engines that emit a chirping audible for many kilometers.

But the main weapon of already traditional copter-grenade launchers is not the grenade itself, but the secrecy with which it delivers it to the target: small size and noiselessness allow you to hover over the enemy’s head and drop the explosive load directly on it. And, even if the copter is detected, it is not so easy to shoot it down, again thanks to its compactness.

The “stealth” of a gasoline-powered hexacopter, I think, is quite obvious, as is its much greater vulnerability (figuratively speaking, it is much easier to get into an open umbrella than into a small plate). Whether this is compensated by a large casting weight is the question, there is an opinion that it is still not. Attempts to install full-time small arms on such a flying platform run into the issue of the stability of the platform itself, which is difficult to ensure simply physically. Therefore, most likely, the creation of just such devices is still a dead end, and one can only hope that the enemy will use it as much as possible of his meager resources.

Our commanders and scientists need to look for and work out at the “Ukrainian training ground” means of self-defense against “tactical drones”, as long as they are used with relatively low intensity. Nevertheless, the products of the fascist “garage engineering” will not go beyond the telecontrol of a human operator, but in a dozen years already, entire flocks of disposable drones will be controlled by automated gearboxes with artificial intelligence on board - and then there will be no time left for study.
Reporterin Yandex News
Reporterin Yandex Zen
Information
Dear reader, to leave comments on the publication, you must sign in.