Super icebreaker "Leader" is only the beginning

February 28 2018
3
Russia is a country with unique natural and scientific potential. The development of science in the country is actively involved in the state corporation Rosatom, paying particular attention to training. The corporation begins to invest in the development of human capital in Russia from a kindergarten, then a school, technical support universities and the basic institute for the nuclear industry - MEPhI, thousands of graduates of which are employed at Rosatom. 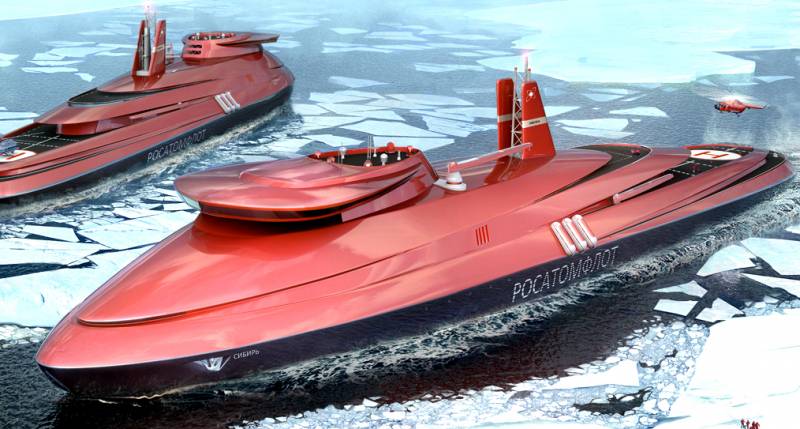 At the WorldSkills Championship for Workers, the Russian corporation has already triumphed three times. Rosatom is ready to train specialists for foreign partner countries.

President of the Russian Federation Vladimir Putin got acquainted with the plans of the state corporation for the rational use of natural resources and the strategic position of the country. He was particularly interested in the Rosatom investment program, which, as you know, is actively involved in digital transformation economics Russia.

The Russians are especially proud of the realization that our country is the only one in the world that has an icebreaking fleet consisting of nuclear powered ships. This opens up great opportunities for using the Northern Sea Route to deliver goods from Europe to Asia all year round. According to experts, the volume of traffic will only grow. Over time, cargo flows switched from the Suez Canal can go along the Northern Sea Route. By 2030, some experts expect to reach the bar of 70 million tons.

Such prospects require due regard on the part of the specialized state corporation Rosatom. Its CEO Aleksey Likhachev shared with the Russian president plans for the development of the icebreaker fleet:

This requires us to add, to the three already built universal icebreakers with a capacity of 60 megawatts at the Baltic Shipyard, two more station wagons; the construction of a small flotilla of medium-sized icebreakers in order not to forget the western direction of supplies to Europe, and the adoption at the turn of 2018-2019 of the decision to build a new generation icebreaker

According to Likhachev, the new-generation icebreaker Leader, being built by Rosatom, will produce 120 megawatts of energy, many times surpassing all existing analogues in power. Also, the general director of the state corporation announced plans for the fall of this year to launch the first floating nuclear power plant, Akademik Lomonosov. Lomonosov’s capacity is estimated at 35 megawatts. It is assumed that Lomonosov will provide electricity to Russian enterprises in the Arctic, which is distinguished by harsh environmental conditions.

Alexei Likhachev shared his “breakthrough” plans for the future:

Of course, I would like to move from the pilot project “Breakthrough” to the industrial complex and start building fast reactors around the world. We came up with such proposals to the government, we hope that we will be able to put the first 2020 megawatt fast neutron reactor into the energy system in 1200

I would like to join the optimism of the head of Rosatom. The scientific potential of Russia can realize the economic potential of our country and make it one of the leaders on the world stage.
Ctrl Enter
Noticed oshЫbku Highlight text and press. Ctrl + Enter
We are
It's important29
United Aircraft Corporation of Russia absorbed
Cheaper: the United States became embarrassed by Ukraine, but lost Europe
Reporterin Yandex News
Read Reporterin Google News
3 comments
Information
Dear reader, to leave comments on the publication, you must to register.
I have an account? Sign in