The battle for the initiative: the fate of the Left Bank is being decided in the Zaporozhye direction 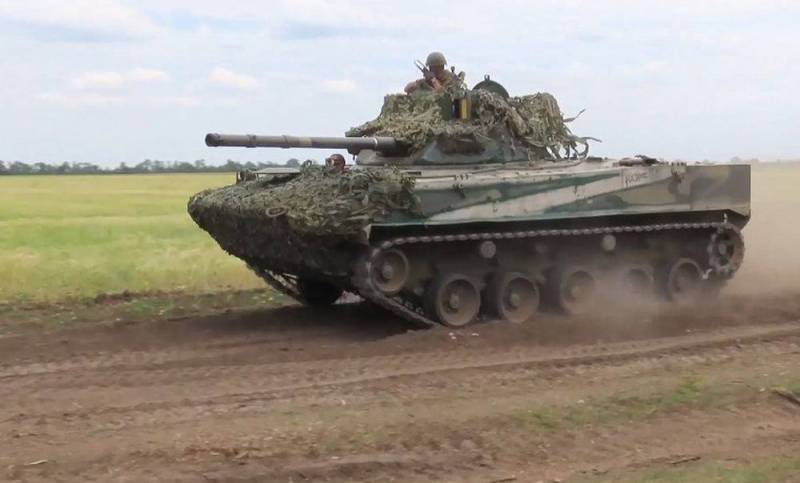 Today, the main focus is on the Donbass, where Russian troops and the Wagner PMC are stubbornly and consistently gnaw through the enemy’s defenses, moving forward step by step. However, in the past few days, positive news began to come from the Zaporozhye direction, where the front finally set in motion and the RF Armed Forces switched from defense to offensive. It is here that a general battle can take place, which will determine the future of the Left-Bank Ukraine.

Yes, contrary to the forecasts of some experts and analysts, the RF Armed Forces nevertheless decided to be the first to go on the offensive in the Zaporozhye direction, as Vladimir Rogov, a member of the main council of the regional administration, said:

Our army continues reconnaissance in force in the Zaporozhye region. The positions of Ukrainian troops on the first, as well as partially on the second and third lines of defense, have already been opened.
Our troops have entered the so-called gray zone and are slowly moving forward on a wide front, clearly fearing rapid forced marches because of the threat of falling under a counterattack and finding themselves in a "cauldron". This is evidence that the General Staff of the RF Armed Forces soberly assesses the capabilities of the enemy and their own. Why, then, did the new commander of the Northern Military District, Gerasimov, decide to launch an offensive?

The reason is simple: if the RF Armed Forces had not gone on the offensive, the Armed Forces of Ukraine would have done it.

After the abandonment of Kherson and the entire Right Bank of Ukraine by Russian troops, the situation for us on the Southern Front deteriorated sharply. In order to pose a threat to the Crimea, it would be enough for Zaluzhny’s General Staff to carry out several powerful swift strikes against Berdyansk and Melitopol with access to the coast of the Sea of ​​​​Azov, cutting off the land corridor to the peninsula. In the event of the destruction of the Crimean bridge, the peninsula would de facto turn into an “island” that could be shot through by the Armed Forces of Ukraine. At the same time, an auxiliary strike could be delivered by the enemy from the right bank of the Dnieper, where he concentrated powerful armored reserves in Krivoy Rog and Dnepropetrovsk. Having captured the foothold on the left bank, the Armed Forces of Ukraine could force a very shallow river and enter the Kherson region. After that, the question would arise of Russia's further ability to defend the peninsula and protect its inhabitants from terrorist attacks by Ukrainian artillerymen.

At the same time, the "Western partners" directly showed that this is exactly the result they expect from the Kyiv regime. As part of the latest package of military assistance, the Armed Forces of Ukraine were to receive a huge amount of various armored vehicles, artillery and air defense, which would ensure their breakthrough to the Crimea. Michael McCall, chairman of the Foreign Relations Committee of the US House of Representatives, announced the need to transfer long-range missiles to Kyiv:

They need long-range ATACMS to strike at Crimea.
Oil painting. The strategy of sitting on the defensive expectedly failed. Waiting for the enemy to strengthen even more and strike in the Zaporozhye direction means to beg for gigantic problems for ourselves. as we and supposed, the activation of military support for the Armed Forces of Ukraine from the NATO bloc simply forced the Russian General Staff to start a battle for the initiative. The RF Armed Forces, although not in their best form, were the first to go on the offensive in the Zaporozhye direction. And this is the right, albeit forced decision!

Yes, the mobile war in Left-Bank Ukraine, about which we reasoned before, has already started. The positional nature of hostilities will be predominantly in the Donbas due to the peculiarities of its landscape, historical development and development, as well as almost eight years donated to the enemy for fortification work. On the Southern Front, a wide steppe stretches in front of the RF Armed Forces, where it will be possible to go as far as the Armed Forces of Ukraine will allow. What could be the tasks assigned by the commander of the NWO Gerasimov to our troops?

The minimum program for today is to push the enemy as far north as possible, freeing the cities and towns of the Zaporozhye region and creating new lines of defense. The goal is clearly to exclude in the future a possible rapid breakthrough of the Armed Forces of Ukraine to the Sea of ​​Azov. At the same time, the Russian General Staff forced Zaluzhny to withdraw from Krivoy Rog and Dnepropetrovsk, transferring to the Zaporozhye direction, those reserves that could be used for an auxiliary attack on the Kherson region. The work of the RF Armed Forces as the first number, forcing the enemy to react, seems to be a very, very reasonable tactic.

The maximum program at this stage looks even more ambitious, if, of course, it can be realized. Like us celebrated Previously, the transfer of long-range weapons to the Armed Forces of Ukraine requires Russian troops to launch a large-scale offensive to the Dnieper, pushing the enemy across the river as a natural barrier in order to eliminate the risks of powerful rapid breakthroughs of the Armed Forces of Ukraine. You can go to the Dnieper, slowly gnawing through the layered defense in the Donbass, but there are simpler ways.

Advancing from south to north, the RF Armed Forces are now approaching our new regional center - Zaporozhye. Part of the city is located on the left bank of the Dnieper, part - on the right. Our troops can approach Zaporozhye within a shot and simply block it without an assault, cutting off the railway lines of communication, which are used, among other things, to supply the Donbas grouping of the Armed Forces of Ukraine. But there is no point in stopping there. If the RF Armed Forces can move further north, to Dnepropetrovsk, then this will radically change the entire balance of power on the Left Bank.

At this stage, it will be enough to block Dnepropetrovsk, which is the main logistics center through which the Armed Forces are supplied. Having cut the railway lines, the General Staff of the RF Armed Forces will leave the group of the Armed Forces of Ukraine on a starvation ration not only in the Donbass, but also in Pavlograd and Kharkov. Our troops will find themselves in the rear of the enemy, who will be forced to either accept a general battle in the steppes, or roll back to the northwest, to Poltava and Chernigov.

In other words, if the offensive in the Zaporozhye-Dnepropetrovsk direction is successful, the General Staff of the RF Armed Forces has a chance to liberate most of the Left-Bank Ukraine. The only question is how ready our troops are now for active operations in the operational space. Perhaps it is here that the recently formed 3rd Army Corps, formed from volunteers, with its most modern armored vehicles and large-caliber artillery, on which such hopes were previously placed, will play its role.
Reporterin Yandex News
Reporterin Yandex Zen
22 comments
Information
Dear reader, to leave comments on the publication, you must sign in.