New Russian ekranoplan: a breakthrough or an unnecessary toy? 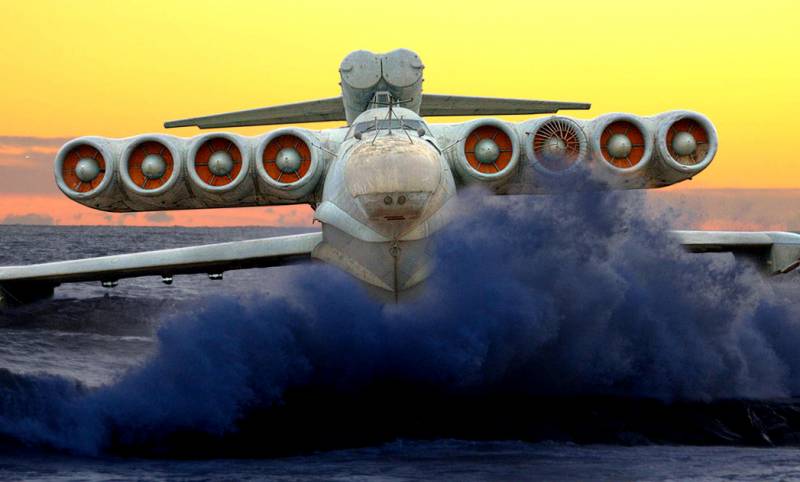 Park of the Soviet period


The appearance of the ekranoplan can be misleading: all because of the external similarities with the usual aircraft. In fact, there are about as much in common between these ships and the usual aviation as the common features of the wagon and Formula 1 car. It is not only the International Maritime Organization that relates ekranoplans to marine vessels. The fact is that they are not able to act outside the so-called screen effect. We are talking about a sharp increase in the lifting force of the wing and other aerodynamic characteristics when flying near a shielding surface, for example, water or earth. In simple terms, there is an air cushion that gives additional lift to the aircraft. The ekranoplan is tightly attached to the surface: in this sense, it is not much different from the "classic" ship.

Can an ekranoplan soar up? In theory, yes. But he will already be an ekranolet. That is, in practice the device will turn out to be an airplane, but with the possibility of switching to the “on-screen” mode. There is, however, one snag. For an ekranoplan, a wide wing of a special profile and a flat wide hull are required, and for an airplane, a narrow wing and a narrow hull (there are many aerodynamic schemes, but so far this is optimal). There are many such contradictions.

All the difficulties associated with ekranoplanes did not frighten engineers of the past years. So, Soviet ekranoplanes could become a real threat to the NATO fleets. The 903 Lun projectile winged aircraft carried on its back as many as six powerful, deadly even for very large ships, Mosquito missiles. Wing speed - 500 km / h. Roughly speaking, it is almost comparable to the cruising speed of some Cold War bombers. The crew of ten people served all this: incomparably less than on any large sea ship. And the ekranoplan has become one of the largest aircraft ever produced. In general, the real achievement of the military-industrial complex of the USSR, which so far no one has "surpassed." 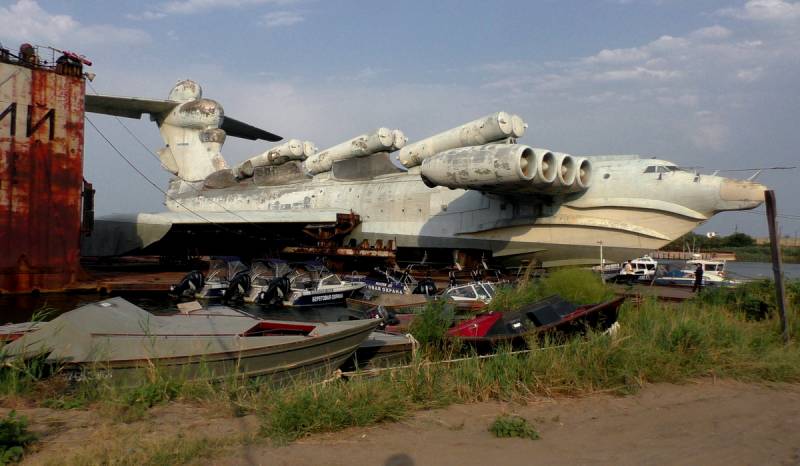 True, only one such ship was built, and it has already been decommissioned. “Lun” repeated the fate of many Soviet military mega-projects that appeared in the late 80s. They had no chance of implementation in the 90s. The Lun also did not become the direct basis for the development of something more modern, but this does not mean that the concept itself has sunk into oblivion.

Modern Russia, striving with all its might to maintain the status of a great world power, desperately needs symbols of greatness. New ones. Everything is good here only at first glance: even assuming that in the aircraft industry and shipbuilding they will continue to make large budgetary injections, none of the current large projects provides the country with real superiority over others. The same MS-21 should become just a successful passenger aircraft. Far from claiming the title of technological revolution. In the defense industry, everything is plus or minus. And although in the case of the T-14, Russia has set its sights on the role of world tank leader, the army and mass production are not yet planned.

What do likely "partners" think about the ekranoplan? Americans are well aware of all the advantages and disadvantages of this type of transport, but are not yet ready to invest in this direction “in full”. Previously, Boeing introduced the concept of a large military transport Pelican. However, for a long time nothing has been heard about him. In China, a similar situation: for now, they are not in a hurry to bet on large ekranoplans, although they are working in this direction too. Now there are no such of technologiesthat would not be dealt with in China. 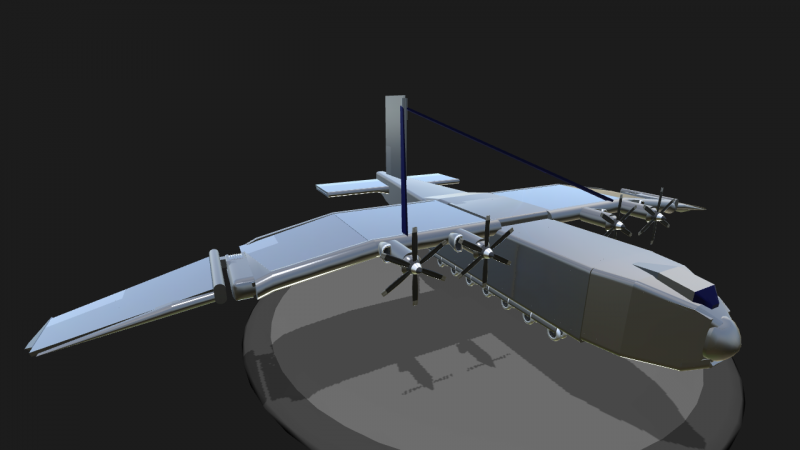 Russian engineers did not leave the concept itself either in the 90s or in the 2000s. Back in 1998, the small Oriole, which, for example, can be used for patrolling, made its first flight. Both light and heavy multipurpose vehicles are created. It is known that the Alekseev Central Design Bureau - the leading Soviet and Russian ekranoplans design enterprise - is engaged in a whole line of “winged ships”, among which there is the heavy ocean A-050 Chaika-2, capable of speeds up to 450 kilometers per hour and overcome distance up to five thousand kilometers. On board it will be possible to accommodate up to 100 people.

But the real "sensation" was the information that appeared on the work in the framework of the new intercontinental Russian ekranoplan. Of course, a very large, expensive and complex vehicle. Recall in October 2018 at the Central Aerohydrodynamic Institute (TsAGI) named after Zhukovsky began to test the model of a heavy transport aircraft integrated circuit (TTS-IS). There are photo models that give a general idea of ​​future development. 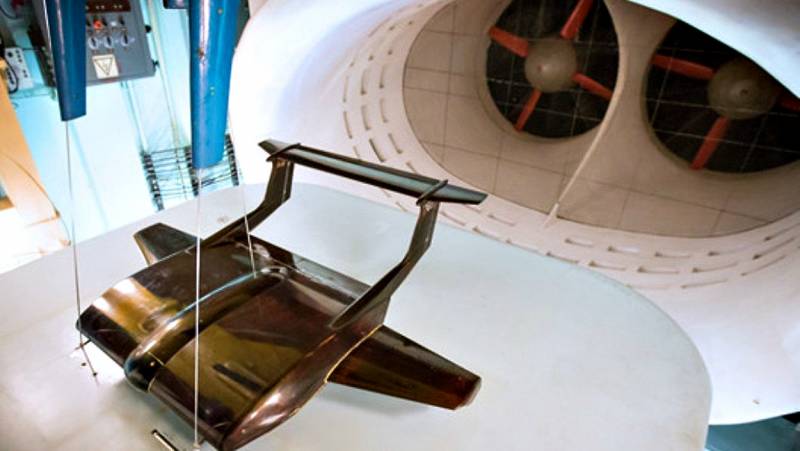 During the purge tests of the model of a heavy ekranolet near the screen, the researchers checked the basic aerodynamic characteristics, including stability and controllability of the model under the conditions of the screen effect. It was noted that after the analysis of the obtained data was completed, the engineers will begin to purge the model in a wind tunnel with visualization of the flow around the surfaces of the glider.

According to reports, the successful completion of the tests will allow the creation of an ekranolet, which can deliver 500 tons of cargo at a distance of more than 500 km at a speed of 6000 km / h. For comparison, the famous An-225 "Mriya" is able to take on board a "modest" 250 tons. Much less. It is assumed that basically the flight will take place near the surface, at an altitude of three to twelve meters from the earth or water surface. That is, the plane will be influenced by the screen effect. Thanks to this, the device will spend less fuel: the ekranolet will be able to take off and land from ordinary runways, which will simplify its operation. 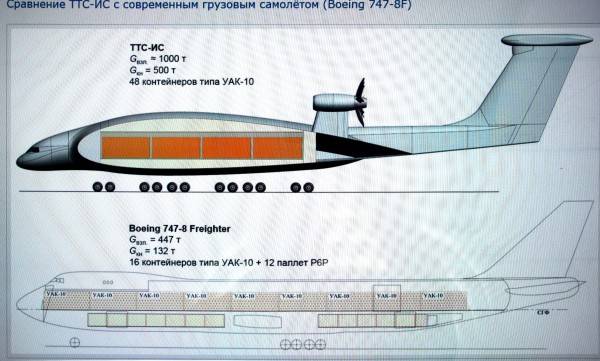 TTS-IS should receive a supporting fuselage and a relatively short wing. The fuselage will accommodate cargo compartments with hinged hatches. It is proposed to use liquefied natural gas as fuel. It is important to note that the new project should not be confused with another mega-device, namely, the Be-2500. This is still a Soviet project, which is managed by the Taganrog TANTK named after G.M.Beriev. It became the largest seaplane ever conceived in history. The creators intend to give him the ability to fly both on-screen, above the water surface, and in high-altitude modes. Now this project is either alive or dead. Obviously, concrete statements are not worth waiting for here.

As for TTS-IS specifically, it is quite obvious today that Russia will not pull up such a costly and technologically complex project, which also has a huge amount of risks. Industrial escapism could still be understood in the 80s or even 90s, when much in the aircraft industry was still developing by inertia. In the inheritance from the USSR. But now, when aircraft industry has to count every penny, investing real money in the next construction of the century will be a fantastic waste. 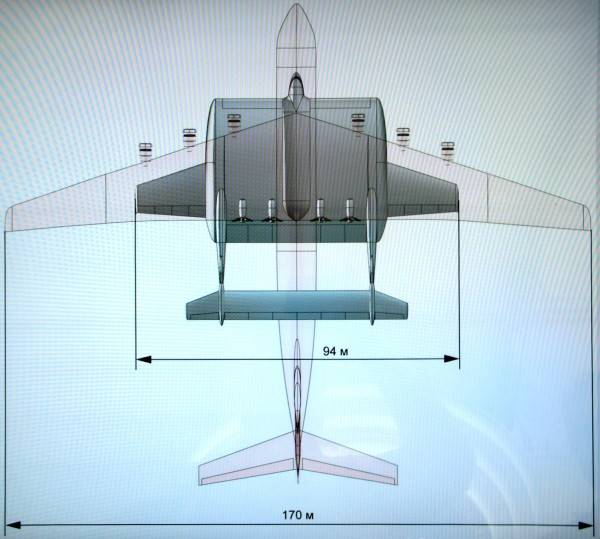 The use of the results obtained during testing to create a reduced version of the aircraft also looks extremely unlikely. Such indicators as mass or dimensions are taken into account at the early stages of design. And leveling the TTS-IS to the level of a "pleasure boat" will not work in any way. All of the above does not at all mean that the project is bad. Just modern Russia is not the USSR, not the USA and not even China. And if we are talking about the extremely costly default aircraft industry, then it makes sense to focus on something more “earthly”. For example, a multi-purpose high-speed helicopter. They say that such machines will soon find their application: both in the civilian field and in war.
Ctrl Enter
Noticed oshЫbku Highlight text and press. Ctrl + Enter
We are
It's important12
Flying will be worse: TOP 5 airliners of the future
Superfast helicopters: will Russia break ahead?
Reporterin Yandex News
Read Reporterin Google News
5 comments
Information
Dear reader, to leave comments on the publication, you must to register.
I have an account? Sign in