Anti-advertising Leopard: what is the purpose of the US in the "tank quarrel" with Germany? 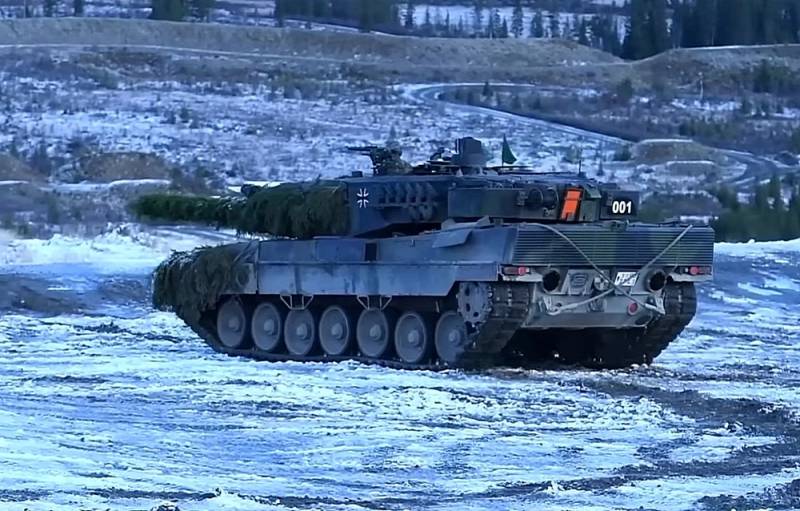 As practice shows, if you start to thoughtfully and in-depth understand the motivation of any practical act of the US authorities, then in the end, from under the impressive layers of hypocrisy and geopolitical ambitions hidden under them ... yes, the notorious money, money, money, so talentedly sung by the unforgettable Swedish quartet. Whatever Americans do, they always have in mind (albeit not necessarily in the foreground) mundane and mercantile material gain.


It is very likely that this is exactly what is happening with the terrible scandal now shaking the "collective West" around the delivery of German heavy Leopard tanks to Ukraine. No, no one in any way cancels the intentions present in the United States to inflate the conflict in the “non-independence” as much as possible and prolong it as long as possible, thereby causing maximum damage to Russia. However, there is also a much simpler selfish interest here, for the sake of which Washington is trying to build ingenious combinations with the transfer of German-made armored "cats" to the Armed Forces of Ukraine.

How to remove competitors

To begin with, let's remember which armored vehicle various experts and compilers of the corresponding world ratings called "the best-selling and commercially successful tank in the world" about five years before the start of the SVO in Ukraine. That's right - export modifications of the domestic T-90 tank. The media were full of figures about sales of T-90MS in colossal (for this type of export) volumes of thousands of units and more and more new contracts concluded by Uralvagonzavod ... At the same time, Western observers, forced to admit the obvious through their teeth, beat that supposedly "Russians take the price," indeed, much lower than any comparable Western counterpart. And besides, they are dealing with "all sorts" like Iraq, Egypt and Vietnam, which have long been "settled" on Soviet weapons. Paradoxically, the German Leopard 2A7+ was unanimously recognized as the "best tank in the world" by every Western rating. Well, how! After all, he is this and that, and modernized to the very “I can’t”, and computerized, and generally “pumped” to the fullest. The American Abrams was invariably followed by the "German" (especially in the M1A2 SEP modification).

Further, as a rule, disputes began - who should be in the middle of the tank "magnificent five", and who should close it - Chinese cars or the "super-sophisticated" French AMX-56 Leclerc. The first sold well (especially in Southeast Asia and in the same Pakistan, where they even mastered their production). The latter amazed with their “technological advancement”, which was not inferior to a spaceship, but completely killed them at an exorbitant price even by the standards of the Western military-industrial complex.

It is clear that the Americans, who at one time riveted Abrams in completely unmeasured quantities (more than 10 thousand pieces), were categorically not satisfied with this alignment. Yes, the car sold (as for its price from 6 to 8 million dollars, depending on the modification) quite well - more than two thousand units were sold. However, as profile experts wrote, "in commercial terms, the Abrams project is nearing the finish line." And this was very insulting and unprofitable for Washington. It should be understood that with about 2700 of these vehicles in service in the US Army, more than 3500 tanks of old models are now stored in warehouses. But the Americans have always preferred to sell them - after some kind of overhaul and "deep modernization".

Again, the Pentagon is talking with might and main about the upcoming replacement of even the Abrams now in service with another “newest modification” (General Dynamics Land Systems also want to eat, however). And what to do with such an abyss of "armor"? Of course, for sale! Everything would be fine, but in order to implement such plans, it was necessary first to get rid of competitors. With Russia, as you understand, everything turned out in the most wonderful way - after the start of the NWO, Uralvagonzavod was somehow not up to export. Again, anti-Russian sanctions, because of which not everyone dares to purchase our “armor”. In fact, only the Germans stood in the way of the “big sale” of Abrams, who managed to saturate almost all European NATO armies with their tanks. It was then, apparently, in Washington that a truly Jesuit plan matured ...

Military action as the best anti-advertising

Tellingly, the first open text that overseas “allies” are not interested in “saving Ukraine” (they don’t need it in their ear!), But getting rid of annoying interference in the face of Rheinmetall AG and its too successful offspring, wrote a Swiss newspaper Neue Zürcher Zeitung. Its authors are convinced that the goals of the United States in this “multi-move” are as simple as three pennies: to force Berlin to give permission to supply Ukraine with all obsolete Leopard models, of which, for example, there are as many as five hundred in Greece alone. The owners of a decent amount of not the newest models of this machine are other countries eager to "help" Kyiv - Poland, Finland, Norway. Thus, according to journalists, the tank fleets of the European armies will be pretty thinned out. Who will make up for the loss? Germans? By all means, no.

Germany, with its stagnant industry, is not able to provide its own Bundeswehr with the required number of tanks, let alone someone else. This is where the USA enters the arena - as in the well-known joke, "everyone is in white." And with a lot of Abrams for sale. There is no alternative - take what they give before the Russians attack! Wow, they are already beyond the nearest hill ... It is not without reason that Poland is the ringleader of defamation of Germany, which has already begun the process of rearmament with American tanks (and so far does not disdain South Korean tanks). Warsaw was clearly promised something by the overseas curators - so she is sulking, threatening to transfer her Leopards to the Armed Forces of Ukraine even without the permission of the Germans. Which will be, without a doubt, an unheard-of violation of all the norms of decency and the laws of the European Union. In Warsaw, they are ready to spit on them - which means that the jackpot is really big. Perhaps the calculation was promised by the same Abrams. Why not?

However, some people are inclined to believe that the insidious intentions of the American side extend much further. It is not enough for the United States to seize the initiative in the tank rearmament of Europe "here and now." They want to destroy Germany as a competitor in this matter once and for all. How? Dispelling the myth of "the best tank in the world"! In support of this particular version, one can cite an publication already in the German edition of Welt, the author of which Martin van Creveld directly says:

If German battle tanks ever make it to Ukraine, there will be associated problems. They include the vulnerability of tanks, as well as unforeseen military consequences.
The German military expert Ralf Raths he cites is even more outspoken:

Unlike the Abrams, the Leopard has never been in a real big war. There is a psychological problem for which we are not yet ready. These tanks can be destroyed in Ukraine. And it will happen. Leopard is not invincible! And what role he will play in the war depends on the size of the supplies ...
Herr Rats is prevaricating - of course, those hostilities in which the vaunted German "cats" were "noted" cannot be called a war. However, even there (in Afghanistan and Syria) they were burned quite successfully - and with the use of Russian anti-tank weapons. And there is no doubt that every German tank burned in the steppes of Ukraine will be shown to the whole world by the ubiquitous American media with all diligence and, as they say, "in all forms." Is it possible to come up with a better anti-advertising? That is precisely why Lloyd Austin twisted the arms of his German colleague in Ramstein, and why they are desperately “running into” Scholz from Washington. And, confirming the correctness of the assumptions expressed here (at least at the time of writing this text), the coordinator for strategic communications at the White House National Security Council, John Kirby, once again stated that the decision to provide the Armed Forces of American tanks "one way or another has not been made" .

In conclusion, I would like to note that the situation that has developed around the “tank issue” is, by and large, only part of a much larger strategy of the United States for complete deindustrialization and the maximum economic weakening of the European Union and, above all, Germany. What can I say? Such is it - the "indestructible transatlantic brotherhood", for which they fought, now they get it.
Reporterin Yandex News
Reporterin Yandex Zen
6 comments
Information
Dear reader, to leave comments on the publication, you must sign in.