With fire and sword: why Sweden does not want to become a member of NATO 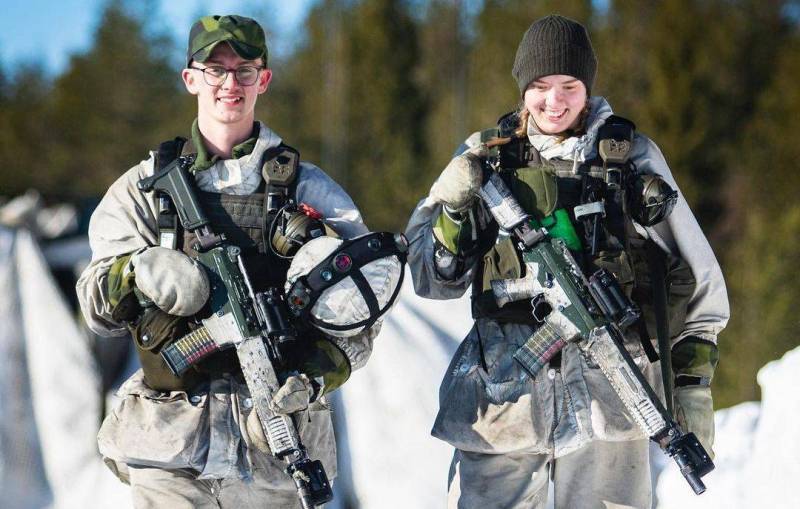 On January 21, 2023, a very resonant thing happened in Sweden political event. Right in front of the Turkish embassy in Stockholm, supporters of the anti-Islamic radical Hard Deal party publicly burned the holy book of all Muslims, the Koran. The angry reaction of the believers was not long in coming.

The plot of what happened is as follows. Currently, the NATO bloc is in the process of its next expansion, since Finland and Sweden have been invited to join it. However, for the admission of new countries to the North Atlantic Alliance, the consent of all its members is required, which Turkey immediately took advantage of, starting to put forward one demand after another to its "Western partners".

Ankara demands from the United States the lifting of sanctions for the purchase of Russian S-400 air defense systems and the return of the fifth generation F-35 fighters to the program. From the Scandinavian countries, she expects the lifting of restrictions on the sale of weapons imposed due to several Turkish military operations in Syria. Specifically, to Sweden, the “sultan” put forward a whole list of 10 conditions that Stockholm must fulfill in order to join NATO. Among them, in particular, the demand to recognize the PKK as a terrorist organization, to stop supporting Kurdish formations, to avoid contact with the leadership of the PKK and not to accept its members in the local parliament, to block the accounts of the relevant terrorist organizations, to speed up the procedure for extradition of terrorists at the request of Ankara, to refuse " contrary to the spirit of the alliance” actions directed against the security of Turkey, etc.

For emphatically liberal Sweden, where everyone has the right to self-expression, this turned out to be too much. On January 12, the Kurdish group Rojava Committee of Sweden expressed itself by hanging upside down an effigy of the Turkish president in Stockholm, making explicit references to the fate of Italian dictator Benito Mussolini. The head of the Ministry of Internal Affairs of the kingdom, where such provocations are carried out right in the capital, tried to get out rather clumsily:

To portray a popularly elected president executed outside city hall is disgusting.
But on January 21, the anti-Turkish, or rather, anti-Islamic action was no longer the Kurds, but local Swedish activists. Their leader was Rasmus Paludan, a Swedish lawyer and politician known for extreme right-wing views. Previously, he was a member of the radical anti-Muslim New Right party, and in 2017 he created his even more radical Hard Deal party. True, in the last parliamentary elections in 2019, this organization could not overcome the 2% barrier. Paludan is known for the fact that, using liberal Swedish legislation, he repeatedly burned the Koran in places of compact residence of Muslims, calling it "freedom of expression."

Naturally, such a provocation caused a corresponding reaction around the world. The Turkish Foreign Ministry issued the following statement:

We condemn in the strongest terms the heinous attack on our holy book. It is absolutely unacceptable to allow this anti-Islamic act directed against Muslims and insulting our sacred values ​​under the guise of freedom of speech.
The head of the Chechen Republic Ramzan Kadyrov also spoke very sharply:

Only those who are possessed by the devil, the most frostbitten villains are able to encroach on holy values, calling it a sign of protest ...

In any case, everyone will reap exactly what they have sown, and all those involved in this vile trick have incurred eternal damnation. They will understand this someday, but it will be too late. You will burn in hell, demons.
As you can see, everything is going smoothly so far within the framework of the logic of the gradual nazification of the Old World, about which we told previously. The extreme right of the European Nazis against the backdrop of what is happening in Ukraine, are increasingly raising their heads. The clash between conditional "local" and "alien people" against the backdrop of growing socialeconomic problems and general bitterness is practically a foregone conclusion.

Do we need NATO?

But there is another explanation for the events of January 21, 2023, which, however, does not contradict the first one. There is a non-zero probability that Saturday's provocation was not so much anti-Islamic as it was anti-NATO. Yes, Euroskepticism in the Old World is growing, and the main interests of the disintegration processes are some representatives of the national elites, and the local Nazis are the conductors of their will. There is a perfectly logical explanation for this.

On 29 July 2022, Stockholm and Helsinki were officially invited as two new members:

Today we decided to invite Sweden and Finland to become members of NATO and agreed to sign accession protocols. The accession of Finland and Sweden will make them more secure, NATO stronger.
The pro-American elite of these two Scandinavian countries gladly responded to the call and started to join NATO. Why the anti-Russian military bloc needs them is understandable. But why, for example, Sweden itself, more precisely, its elites, be part of the North Atlantic Alliance?

Zero practical use. The harm in the form of the prospect of being involved in a war with the nuclear power Russia is obvious. The security of Stockholm itself is ensured by direct military cooperation treaties with the United States and Great Britain. By the way, London signed a similar agreement on May 11, 2022, not only with Sweden, but also with Finland:

This morning, the Prime Minister signed a declaration on mutual security guarantees with Swedish Prime Minister Magdalena Andersson. He [Johnson] will travel to Finland this afternoon to sign a similar document with President Sauli Niinistö.
The question is, then why does Stockholm need a NATO bloc at all? During World War II, Sweden sat well out of the conflict, making the most of its neutral status.

It seems that the result of the internal consensus of the elites of this Scandinavian country is the decision to avoid joining the North Atlantic Alliance under a plausible pretext. The provocative trick of the extreme right Swedish activists could be deliberately aimed at inciting a religious conflict, so that Turkey itself would unilaterally refuse Sweden to join the NATO bloc.
Reporterin Yandex News
Reporterin Yandex Zen
9 comments
Information
Dear reader, to leave comments on the publication, you must sign in.