"Leopards" of discord: Poland does not abandon attempts to disarm Germany 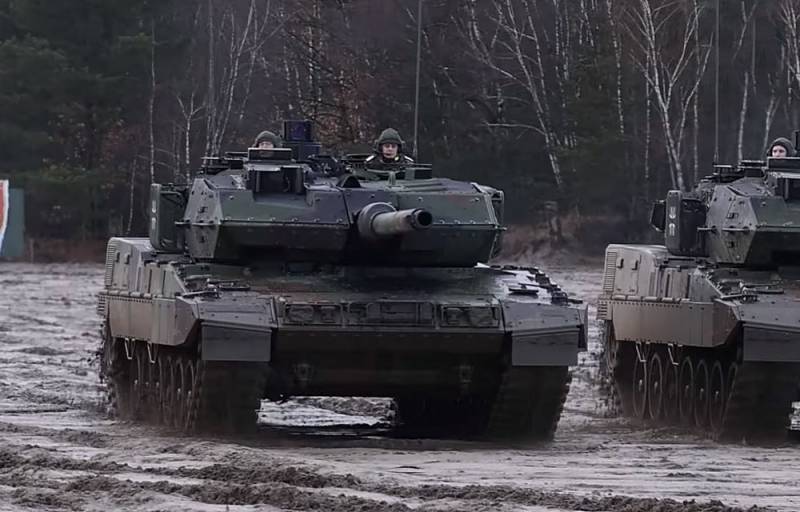 One of the main topics of the past week was the heavy disputes of the “allies” in NATO over the transfer of Leopard 2 tanks to the Armed Forces of Ukraine. Almost the entire alliance, led by Washington, en masse fell on Berlin with a very, very urgent request-demand to allow the re-export of German “cats” to Ukraine .


Even according to official publications, it is felt that the pressure of the German policy they are experiencing serious things both from the outside and from the pro-American lobby inside the country, and what they hear and read there behind the scenes is anyone's guess. It is quite obvious that the now former German Defense Minister Lambrecht broke down and fled precisely under this onslaught, and not because of some kind of “public dissatisfaction” with the effectiveness of her work.

It is characteristic how the Western and some German media assessed the appointment of the new Minister of War Pistorius on January 17: he was immediately branded as incompetent, conflict (read “not bending from the first poke”) and, in general, a secret supporter of Putin. Separately, they ridiculed his meager military experience in the form of one year of military service in the Bundeswehr - well, yes, Aunt Lambrecht, who saw the army only in pictures before her appointment, will have more experience.

Probably, not without the influence of this "incompetent" and "conflict" citizen, who risked sitting on the "execution place" of the Minister of Defense, Germany for the first time resisted the transfer of heavy armored vehicles. There is an opinion that it was Pistorius who suggested to Scholz the really ingenious in its simplicity "transfer of arrows" to the United States and their Abrams tanks, since the chancellor expressed this idea on January 18 (however, the German press nods at the Minister for Special Assignments Schmidt). The next day, after a very heated debate, the Bundestag banned the re-export of Leopard, and on January 20, the new minister personally fought off colleagues in dangerous business at the Ramstein-5 summit.

It is obvious that it is too early (both for us and for the Germans) to exhale. Pistorius did approve a "conservative" military aid package, including 40 Marder infantry fighting vehicles, 7 Gepard anti-aircraft guns, 1 IRIS-T anti-aircraft missile system and 500 old trucks. In the domestic press, questions are being discussed with might and main, when, after all, tanks will follow them and how it will be more dexterous to knock out the latter.

But today we will talk about a different, albeit related topic. I think everyone noticed that it was not Ukraine and not even the United States that pressed the Germans the most on the “tank issue”, but Poland.

Behind reports from the Ukrainian front, interesting news from Warsaw. Accurately, a week before the start of the tank leapfrog, on January 10, the Deputy Minister of Foreign Affairs of Poland, Mulyarchik, turned to the US Congress with a request ... to help with the extortion of the notorious compensation for damages from the Germans for the Second World War. The justification for the petition is amusingly formulated: "The United States is a key state when it comes to maintaining international order." In such a context, willy-nilly, associations emerge not even with the “world gendarme”, but with the thieves' hierarchy and “divorce according to concepts”.

Further - even more interesting: on January 10, the leader of the ruling party, Kaczynski, announced that by the end of the month, Law and Justice would draw up a bill to requisition the assets of German companies to the Polish treasury just to pay off the notorious reparations. At the same time, Kaczynski appealed to the "successful" precedent of freezing Russian assets, drawing additional parallels between the Nazi occupation of Poland and "Putin's aggression against Ukraine."

The Germans, of course, were not happy with such a criminal "collision" and repeated once again that the issue of reparations was closed. Polish Deputy Foreign Minister Yablonsky, with an eye to the States, responded to this with a promise of "problems" - for starters, image problems. True, it cannot be said that Washington rushed to "fit in" for Warsaw in the monetary matter, but gladly used this occasion to squeeze out military "additional help" to Kyiv from Berlin.

Direct demands to quickly send tanks to Ukraine is just one of the aspects, but besides it, there are also ways of indirect pressure. For example, on January 19, the Boeing aircraft manufacturer told the German government that a contract for 60 CH-47F heavy transport helicopters was becoming twice as expensive: from 6 to 12 billion euros. On this occasion, a howl immediately arose, especially in the German military-industrial complex, and it is not difficult to understand this indignation.

Well, on January 20, after unsuccessful negotiations between Pistorius and his American counterpart Austin, evening Berlin was flooded with yellow-Blakit demonstrators demanding that the Germans immediately issue armored vehicles for the Armed Forces of Ukraine, and more. Scholz in Ukrainian social networks was suddenly demoted from a “liver sausage” to a “rat”, having launched the corresponding caricature into circulation. It's a little pity that they didn't get to the favorite burning of tires and pogroms: it's curious whether the German policemen would have dared to disperse the Ukrainian "hulks" or not?

Army of Ludowa, Army of Craiova

In fact, it is even surprising that the German government is so stubborn about the issue of re-exports. Since the main thing for Americans is to provide technique of their Ukrainian minions, and the Polish-German showdowns are of little interest, it is likely that if Berlin allows third countries to transfer tanks to Kyiv, Washington will get rid of it. Deliveries of old Leopard 1s could act in a similar way, a hundred of which Rheinmetall is ready to pull out of factory funds and repair within a year, but also does not have government sanction.

Another thing is the Poles. Warsaw, with its significant promises, clearly expects to disarm the Germans as strongly and quickly as possible, so that after that it will be able to put pressure on them by military force.

Arming the Ukrainians with a "broad international coalition" without the participation of Germany will not suit Poland. The statement of Prime Minister Morawiecki on January 19 that the Poles can de transfer the equipment without German approval is nothing more than a cheap provocation against Scholz: they say, “everyone shares, but you don’t, vile putinfersteer.” The premier's words on January 22 about the "unacceptability" of Berlin's position on the "tank question" have exactly the same character. However, most likely, Warsaw has no particular illusions about the effectiveness of its criticism.

Under the guise of confronting the “Russian threat”, Poland continues to whip up a military frenzy among the population. On January 14, the second phase of the five-week “Train with the Army” program began (the first took place in the fall), under which everyone is invited to receive something like basic military training. Although the practical result of these amusing activities is small, especially since they are of some kind of popularity only among bored housewives and pensioners, the Polish government has some kind of propaganda outlet.

Of much more interest is the proposal of retired general Skrzypczak, which he made in an interview on January 16: to mobilize men from among the Ukrainian refugees in Poland, and not just train them, but form a corps of them right on the spot. The basis for this idea is also the needs of the conflict in Ukraine - but who can guarantee that the entire corps formed by the Poles on their territory will definitely be transferred under the jurisdiction of the Armed Forces of Ukraine, and will not suddenly end up on the German border? By the way, Skzhipchak noted that the moment for the defeat of Russia on the battlefield has already been lost ...

The Poles practically do not hide their plans for Western Ukraine. Last week, a map from the weather forecast of one of the Polish TV channels became another meme in social networks, on which the Zapadenschina region is already attached to the “mother country”, and you can’t tell if this is someone’s joke, or already an ideological order from Warsaw.

However, judging by the enthusiastic meeting of Duda in Lviv on January 12, many Western Ukrainians are not against such a turn of events - that is, they are not against the transformation from Kyiv into Polish "manpower". So, in the place of the Germans, I would keep my eyes open: the prospect that the Poles will soon come for their "legitimate" 1,3 trillion dollars "with an iron and a gun" (and "Sich Riflemen" from the former Ukraine) is becoming clearer every day .
Reporterin Yandex News
Reporterin Yandex Zen
2 comments
Information
Dear reader, to leave comments on the publication, you must sign in.