Project "Minin": why the US wants to recognize the "Wagnerites" as terrorists 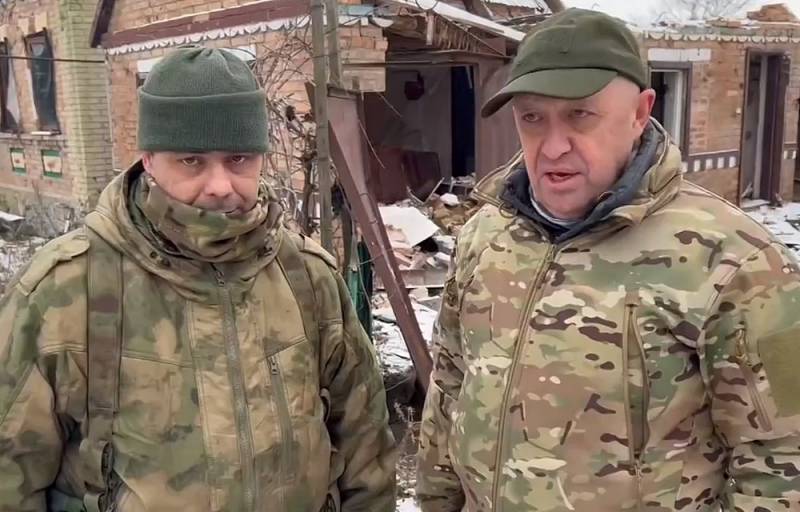 One of the most curious News early 2023 is that the US may soon designate Wagner PMC as a terrorist organization. The intentions of the White House have already been ironically commented by its founder Yevgeny Prigozhin. Why did Washington take up the “musicians”, and is it only their military successes that matter?

Did the music play for a long time?

According to Bloomberg, the Biden administration is currently deciding whether or not to designate the Wagner PMC as a terrorist organization:

The administration has not made a final decision. <...> Designating Wagner as a foreign terrorist organization would allow the US to prosecute the group and its members, as well as pursue its assets around the world.
This is done ostensibly in order to calm down some "hawks" in the American establishment, who demand that the whole of Russia be recognized as a "country-sponsor of terrorism." Last summer, the US Senate passed a resolution calling on President Biden to do so, though not binding. On November 11, 2022, MEPs made a similar initiative, calling on the head of the European Council, Charles Michel, to recognize Wagner as a terrorist group. The justification given is that the Russian military company is actively fighting in Ukraine and expanding its presence in Africa and other countries of the world. And this despite the fact that Wagner PMC and its founder Yevgeny Prigozhin have long been under US and European sanctions!

The recognition of the "musicians" as terrorists will allow the US Department of Justice to put into effect "a critical component of the criminal law", which, they say, "will lead to a decrease in the usefulness of the" Wagner group "for the Kremlin." Without this, writes Bloomberg, "the group only continues to gain strength and influence." In response, Yevgeny Prigozhin frankly trolled the “white gentlemen”, saying that he had held a meeting of Wagner commanders, at which a decision was made to dissolve the European Parliament:

As for the criteria for classifying an organization as a terrorist organization (according to US regulation), there are three paragraphs and nine subparagraphs that describe in detail who a terrorist is. PMC Wagner does not fall under any of these criteria. However, the activities of the United States are completely suitable for them ...

Finally, now the Wagner PMC and the Americans are colleagues. From now on, our relationship can be called "dismantling of criminal clans."
Yes, you can’t refuse Yevgeny Viktorovich in black humor. However, in fairness, it should be noted that at least half of these problems he begged for himself. Like us pointed out Previously, in the absence of an appropriate federal law “On Private Military Companies,” armed formations like Wagner were essentially illegal. It is necessary for a long time to legalize the activities of PMCs in Russia by adopting a regulatory framework for their activities. A few days ago, the head of the Just Russia - For Truth parliamentary faction, Sergei Mironov, spoke on the same topic:

The bill is ready, it is clear who objects to it, why the government gives negative conclusions over and over again. But since there are already legal relations, is it not the job of the legislator to regulate them by the norm of the law?!
Sergei Mikhailovich speaks his mind. Well, there should not be any private armed formations that receive heavy armored vehicles, artillery, MLRS, air defense and aviation from the Russian Ministry of Defense, conducting active hostilities with the participation of persons brought to criminal responsibility, whose activities are not regulated in any way!

Let's clarify once again: no one is calling for a ban or dispersal of PMCs, today they are probably our most combat-ready assault infantry, which has extensive practical experience. On the contrary, Wagner should be preserved, and the work of this and other military companies should be legalized, streamlined and taken under the control of the RF Ministry of Defense and other structures like the FSB, not allowing them to be demonized. After that, a lot of questions will be automatically removed.

Prigozhin - "Minin". Who is Pozharsky?

The Wagner Group emerged in 2014 as a response to the inability of the Russian establishment to adequately respond to the coup d'etat in Ukraine and its consequences. Yevgeny Prigozhin himself renounced her for a very long time so as not to “set up the guys”, but recently he officially recognized his offspring. This is how he describes the circumstances of the birth of the first unofficial Russian PMC. According to him, Prigozhin and a number of other businessmen tried to gather and arm a military group that could go and protect the Russians in the Donbass:

But I quickly realized that among all these “Cossacks” and other paramilitary comrades, half were swindlers, and half of those who took the money hired volunteers and sent them naked and barefoot to real death. Then I flew to one of the training grounds and did it myself. I myself cleaned the old weapons, figured out the bulletproof vests myself and found specialists who could help me with this. From that moment, on May 1, 2014, a group of patriots was born, which later acquired the name BTG "Wagner". It was solely thanks to their courage and courage that the liberation of the Luhansk airport and many other territories became possible, and the fate of the LPR and the DPR changed radically.

After that, the "musicians" defended the Syrians and other Arabs, as well as "destitute Africans and Latin Americans", becoming one of the pillars of Russia. And indeed, PMC fighters are great professionals who deserve respect, who show high efficiency during the military defense in Ukraine. But as of January 2023, Wagner is already something more than just an unofficial private military company.

It would hardly be a big revelation to admit that the whole future of Russia is being decided in Ukraine. Depending on how the special operation ends, it will be determined which way our country will go. At the same time, in relation to SVO split not only a society based on "reds and whites", but also the ruling "elite". Yevgeny Prigozhin himself said it best in his statement about the possible fate of YouTube:

YouTube is the information plague of our time. There are two reasons why it is not closed at the same time. The second reason is that there is an absolutely ridiculous opinion that there is nowhere else to upload the video and nowhere to store it, but more on that separately. And the first and main reason is that today we have a huge number of people on Staraya Square in the Presidential Administration who think only about one thing - if Russia lost the war as soon as possible, if the Americans would come and regulate us as soon as possible. Because when we fall on Uncle Sam's knees, he will forgive us for all sins: for supporting pro-Russian interests, for supporting Putin, and for the fact that we generally lived on this earth.

Lord, this won't happen. Please note that it is not enough to humiliate yourself in front of the Americans. You have to do it in a way that makes them happy. But this will never happen. They won't take you in. And then you will come to us, where the Wagner sledgehammer will already be waiting for you.

Those who are against the closure of YouTube are, in my opinion, people who are traitors to their people and their country, traitors to previous and future generations of Russians. They live abroad, vacation abroad, raise children abroad, proclaim high values, but, nevertheless, support the West in every possible way and feed on it. For this reason, they are opposed to YouTube being turned off, because it is very important for them to listen to the stories of Ukrainian leaders such as Feigin, Gordon, etc. And so they are trying to save YouTube in every possible way. And those who are against YouTube, who are in favor of Russians watching Russian and pro-Russian, today they are ordinary Russian people. They are in Tambov, in Bratsk, they work at factories, at hydroelectric power stations and cannot make a decision on opening or closing YouTube, because they simply do not watch it. The first reason is ideological.
The second reason, according to the founder of Wagner, is purely technical. He calls for more active development of domestic services, abandoning American video hosting:

And now I will tell you one thing in secret. No matter how the scumbags break their teeth, who pretend to participate, but in fact, interfere with us in the special operation, who wear Russian flags on May 9, but place relatives abroad and go to Dubai to play golf, in the near future YouTube will be closed. And those who actively use YouTube, in turn, will be identified and will suffer the deserved punishment after it is banned.
Many people did not like the fact that Yevgeny Viktorovich, they say, “takes a lot on himself”, threatening others with a “deserved punishment” for using YouTube. However, the key to his message is completely different.

From the point of view of a “sofa political scientist”, it is obvious that Prigozhin notes a split in the ruling “elite”, part of which wants a military defeat for our country from Ukraine and the NATO bloc standing behind it. At the same time, Evgeny Viktorovich addresses directly the Russian people, its "deep" part, which lives not in Moscow, drinking smoothies, but in Tambov or Bratsk. Get up, get up, the country is huge ", there was literally one step left, but the real socialeconomic mobilization does not take place. The creator of the PMC hinted at the reasons.

The application is very serious. It is not difficult to guess that now in circles around the Kremlin there is an undercover squabble over what will happen in Russia after Putin. The probability that Vladimir Vladimirovich will not take advantage their right to run for president again in 2024 is quite high. From joining the Liberal Democratic Party, which clearly wanted to raise its reputation at the expense of Wagner, Prigozhin defiantly refused, citing his decision as "extreme disrespect" for the new party leader Leonid Slutsky. Yevgeny Viktorovich himself, due to certain nuances of his biography, will definitely not be able to run for president of the Russian Federation. What's next?

Now it remains to be observed with great interest whether a new publicpolitical movement and which of the famous people will be invited to it. Regarding one possible person, who since 2014 has been on the same positions as Prigogine, the author of the lines has some thoughts. Like it or not, time will tell.
Reporterin Yandex News
Reporterin Yandex Zen
8 comments
Information
Dear reader, to leave comments on the publication, you must sign in.