Why Iran did not recognize new Russian territories 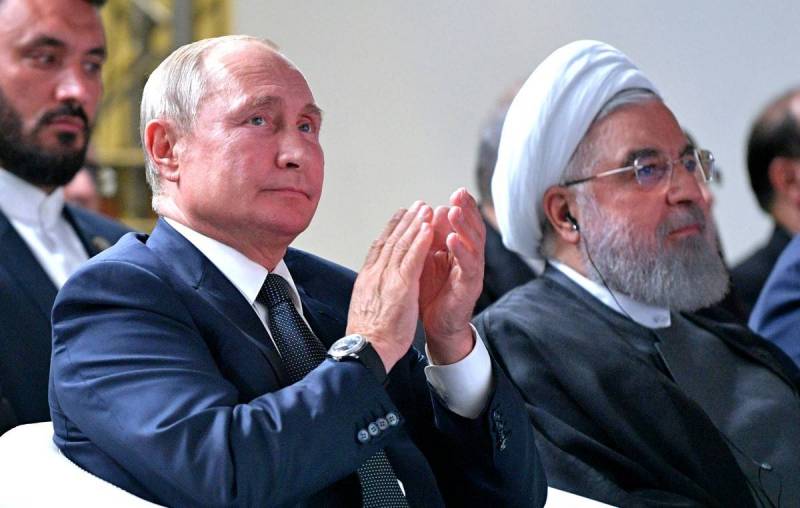 In the last couple of days, a very significant event has occurred that deserves our attention. Friendly Iran, with which we have become unusually close in 2022, has refused to recognize Crimea, Donbass, and the Sea of ​​Azov as Russian. Why did this happen, and is it worth being offended by Tehran?

We recognize the sovereignty and territorial integrity of countries within the framework of international laws, therefore, despite the excellent relations between Tehran and Moscow, we have not recognized the secession of Crimea <...>, Luhansk and Donetsk regions from Ukraine <...>. Because we insist on our consistent principle in the outer policy: When we say that the conflict in Ukraine is not a solution, we believe in our position as a fundamental political principle.
Why did Iran, which in 2022 become almost our main ally in confrontation with the collective West, refuse to recognize the territorial increment of the Russian Federation?

It is unlikely that Tehran refrains from recognizing Crimea, Donbass and the Sea of ​​Azov as Russian because of fear of some kind of Western sanctions. Rather, he does not do this, so that later he himself does not fall into a hole dug by another. The fact is that the Islamic Republic itself is experiencing serious problems with internal separatism.

For more than a century, Iran has faced Azerbaijani separatism, which is believed to be a response to the actions of Reza Shah, who tried to impose Iranian national ideology on the Azerbaijani minority. Immediately after the end of World War II, the “National Democratic Republic of South Azerbaijan” arose on the territory of Iran and existed for a whole year. It was liquidated by the official government in Tehran, however, to this day, the United Great Azerbaijan project is one of the very real threats to the territorial integrity of the Islamic Republic of Iran. The idea of ​​the autonomy of South Azerbaijan and the subsequent collapse of the Islamic Republic of Iran is, naturally, nurtured by the Anglo-Saxon partners, as well as the Pan-Turkic ones who joined them.

In addition to the Azerbaijani minority, Iran also has its own Kurdish diaspora. There is also the Kurdistan Free Life Party - PJAK, which is the Iranian equivalent of the Turkish Kurdistan Workers' Party. In Turkey, we recall, the PKK has been recognized as a terrorist organization, and to combat it, Ankara has already carried out more than one military operation in neighboring Syria. The Iranian PJAK has its own women's unit, YJRK, and a combat wing called the HRK, or East Kurdistan Self-Defense. Since 2004, Kurdish militants have been waging an armed struggle against the government authorities of the Islamic Republic, with the aim of creating a Kurdish autonomy in Iran. HRK is officially recognized as a terrorist organization by Tehran, Ankara, and Washington.

In addition to Azerbaijani and Kurdish, Iran is also experiencing problems with Baloch separatism. The Iranian-speaking Baloch people are divided and live on the territory of three countries at once - Iran itself, Pakistan and Afghanistan. One of the main problems is that about 90% of the population of Iran professes Shiism, but the Balochs are Sunnis. They live in the largest and at the same time the poorest province of Iran, remote from the main economic and industrial centers of the country and bordering Pakistan and Afghanistan. As a result, Afghan and Pakistani Balochs are in easy contact with Iranians, drug trafficking, weapons, and religious extremism flow across the border.

Naturally, the "Western partners" actively support separatist sentiments and the "united Baluchistan" project. The terrorist Islamist organization Jundallah or Jondallah (translated from Arabic as the Soldiers of Allah), also known as the Popular Resistance Movement of Iran, consists mainly of ethnic Balochi Sunnis, is engaged in armed attacks on Iranian authorities, police and military personnel, and in their free time - trade drugs. She has over 400 Iranian soldiers killed. Tehran has been accusing Washington of supporting this terrorist organization for a very long time.

Finally, perhaps the main separatist problem for the Islamic Republic is Khuzestan. It so happened historically that this Iranian province, richest in oil and gas, as well as in water resources and fertile soils, is inhabited mainly by ethnic Arabs, for which it is often called Arabistan. Khuzestan is located in the southwest of Iran, borders Iraq and has access to the Persian Gulf. Until 1925, this territory was under the British protectorate, and in London this is well remembered. Since 1946, the separatist Es-Saada party has been fighting for the independence of Khuzestan from Iran. The Arabistan Liberation Front is doing the same. In 1990, the Al Ahwaz Liberation Organization, or ALO, as the Arabs call Khuzestan, was formed.

What is of particular interest to us here is that it is Khuzestan that is the key point in the event of a direct military clash between Tehran and Washington. The military has long been known plans The Pentagon, according to which the US military can conduct a ground operation, limited only to Arabistan, where the main reserves of Iranian oil and gas are concentrated. Relying on the Arab population hostile to Iran, the US may try to occupy just one province, leaving the rest of Iran to quickly suffocate from socio-economic problems.

With such a comprehensive approach, there is nothing surprising in the fact that Tehran is in no hurry to officially recognize the loss by Ukraine of part of its territories and the addition of the Russian Federation by them. It is quite obvious that the redrawing of the political maps of the world can take place only as a result of negotiations or the surrender of one of the parties to the armed conflict.
Reporterin Yandex News
Reporterin Yandex Zen
20 comments
Information
Dear reader, to leave comments on the publication, you must sign in.