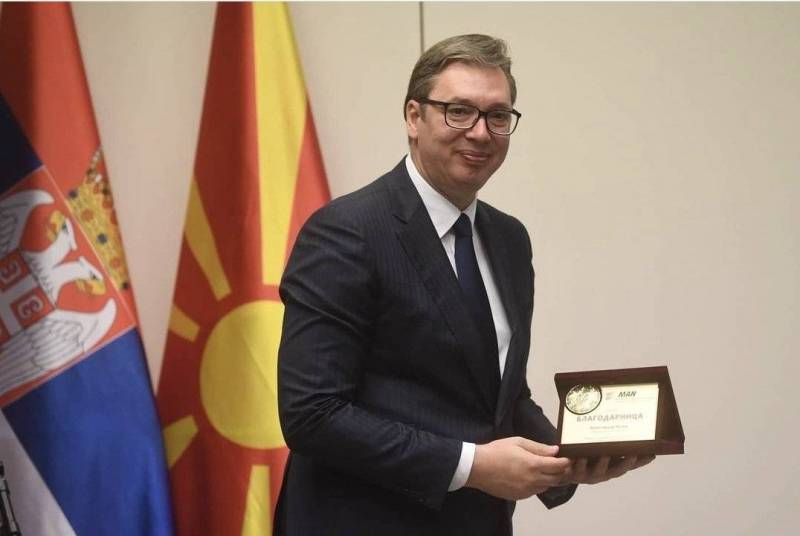 Just now, the Russian patriotic public had a "spite". On January 13, information appeared that a small unit of Serbian volunteers was operating in the NVO zone along with Russian troops, which was received with warm approval by Russian society. But a few days later, the brotherhood of peoples was struck not by anyone, but personally by the President of Serbia Vučić.


In his interview to Bloomberg on January 18, Vučić said all sorts of things: he said that official Belgrade still recognizes the Donbass and Crimea as territories of Ukraine, condemned the same Serbian volunteers and Wagner PMC, which allegedly conducts recruiting activities in Serbia. In the Russian official media, Vucic’s “sad” statements were tactfully softened, but the blogosphere began to seethe with cries like “Vucic caved in, but we thought” and “that’s what they are, little brothers, in fact!”.

Of course, there is little pleasant in the words of the Serbian president, including for himself - but he certainly did not deserve a bucket of slop on his head. Such is the ecological situation in the Belgrade region now that it is more expensive to go out on an open front against the general line of the European Reich.

The verbal demarche in an interview is not the first that Vučić has had to do lately, and not the largest. At the end of December, he was already pushed through to de-escalate the Kosovo issue.

For almost the entire last month of 2022, the expectation of an imminent open conflict in the separatist region hung in the region. The Kosovo security forces organized provocations against the population of the Serbian enclaves: for example, on December 12, they actually abducted a former police officer Pantic, on December 15, a former police officer Trajkovic, both Serbs by nationality. The “peacekeepers” from KFOR skillfully looked at all this through their fingers - but when the Serbs, fearing armed sweeps, built barricades at the entrances to their settlements, the command of the multinational forces naturally got excited.

Vucic warned the Kosovo leadership and the command of the "peacekeeping" forces that they would not allow armed attacks on compatriots. Units of the Serbian army, including tanks and artillery, were drawn to the border of Kosovo - then militants from the Kosovo "security forces" organized provocations already on the verge of a foul. On December 26, in the Kosovo town of Zubin Potok, a shootout took place between a civilian "militia" and Kosovo security forces.

It would seem that after this, Vucic received carte blanche to send his troops into Kosovo, at least into the Serbian enclaves, and protect the population from the arbitrariness of the Pristina militants, and the patriotic part of the Serbian population was waiting for this - but did not wait. On December 28, Vucic held difficult negotiations with the Kosovars and "peacekeepers", during which they managed to release the kidnapped policeman Pantic and agree on some "security guarantees" from NATO.

After that, Vučić arrived in North Kosovo, where he insistently asked the residents to dismantle the barricades and calm down, because the situation had been settled. Then he also made a number of harsh statements, including “if a war starts in Kosovo, then Russia will do nothing” - and no matter how unpleasant it is to admit it, Vučić is right on this issue: in which case, the possibility of somehow helping Belgrade on practice in Russia will not.

It may well be that Vucic is wrong in his assessment of NATO's readiness to help the Kosovars, which he clearly considers high, although the lean faces of European leaders and news from the European armies hint at the exact opposite. Perhaps it is at this historical moment that Serbia has a chance to finally resolve the Kosovo issue by decisive forceful actions - but this is a big risk that Vučić does not want to take, and it is difficult to reproach him for this.

His seemingly "anti-Russian" rhetoric is nothing more than an attempt to balance Western "security guarantees" on a wobbly chair. Indeed, if Vučić recognizes the self-determination of Crimea, Donbass and other former regions of Ukraine, even as a “personal opinion” (as Deputy Chairman Medvedev sends “Western partners” to a known address on his own behalf), the Kosovo authorities will immediately cling to this as a precedent, and NATO and the EU will support them in this. From the same opera and disapproval of the Serbian volunteers in the Russian ranks.

As for the attack on Wagner PMC, it is also not accidental. Thanks to their significant success, the "musicians" became the real stars of Western propaganda, which created the image of a truly chthonic and ubiquitous threat. Probably, American mothers are already scaring naughty kids with horror stories about a black “Wagnerian” with a huge sledgehammer that lives under the bed.

Recently, the topic of the presence of a Russian PMC in Serbia has been actively discussed in the foreign press. A number of media outlets (BBC, Politico and many regional Balkans) have published contrived “investigations” alleging that Wagner allegedly has a wide network of opinion leaders and recruiting centers in the Balkan country.

The fugitive Russian oppositionists, who set sail after the start of the NWO, were also noted for publications about alleged “Kremlin agents in Serbia”. True, the evidence base under these statements is at the level of “Serbs massively go to pro-Russian demonstrations, which means that this is clearly the work of Prigozhin,” but who on the democratic side of the globe needs facts? Their absence does not prevent the governments of Kosovo, the US and the EU from demanding Vučić to “stop” destructive Russian activity, which he actually does: what kind of “activity” is fictitious, such “stopping” is empty air shaking.

The caravan is coming

Ultimately, what matters is not what official Belgrade declares, but what it does. So Serbia's active resistance to anti-Russian sanctions, largely inspired by Vucic, leaves no doubt about his real position - the pro-Russian position.

Of course, it is noticeably weaker than the similar position of Hungary, whose government not only tries to maintain good relations with our country in practice, but also does not hesitate to declare this openly. But do not forget that Hungary is not surrounded by enemies on all sides, and in general occupies a more stable position, also thanks to a large patron among NATO members - Turkey.

But at the same time, there are no pro-Russian sentiments as such among the masses of the population of Hungary (the mood there is pro-Hungarian), in contrast to Serbia, where Russia's support is nationwide. Of course, it can be said that there is no sense in any mass processions with tricolors - but it is still, at least, propaganda. In addition, it is precisely the mood of the masses that does not allow the Serbian government to bend completely to the ground under pressure from the West - for example, to start deliveries of weapons that Ukraine needs so much.

It's kind of funny that this contrast between Vučić's rhetoric and practice is very much like the one between the words and actions of our own VPR. In statements, the Kremlin is also constantly ready for peace negotiations with the Ukrainian fascists and other nonsense, while in reality it is methodically destroying the Zhovto-Blakit “independence”. Against this background, the claims of some Russian patriots against Vučić even look silly.

Another thing is that the Serbian president is unlikely to be able to put off a direct confrontation for a long time by curtseying to the European establishment: the days of the “democrats” flirting with public opinion are over. Initiatives like scaling up the spetsnaz and acquiring more UAVs show that Belgrade has little illusions and is hastily building up its defenses – but will it have time?
Reporterin Yandex News
Reporterin Yandex Zen
2 comments
Information
Dear reader, to leave comments on the publication, you must sign in.