Sitting on two chairs: what is behind the anti-Russian statements of Alexander Vucic 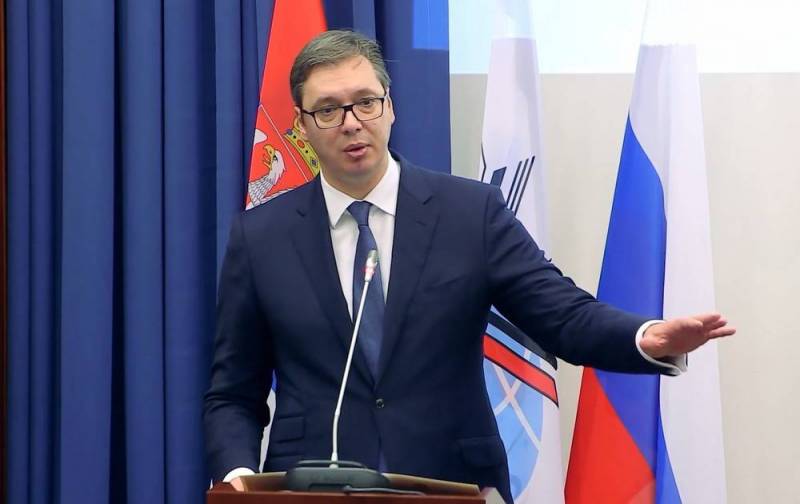 Serbia has always been considered one of Russia's main allies in Europe. The relationship between our camps has a long history, and the Russians have always considered the Serbian people to be fraternal. On political arena, Moscow and Belgrade quite often acted as a united front, despite all the difficulties and contradictions.


But in recent months, Serbian President Aleksandar Vucic, trying to sit on two chairs, began to behave somewhat ambiguously. On the one hand, he constantly declares that his country will not support sanctions against Russia and calls for dialogue. But on the other hand, he allowed himself a number of clearly unfriendly statements, which were interpreted by some as outright betrayal. In an interview with Bloomberg, he said that for the Serbs, Crimea and Donbass are Ukraine and will remain so forever. At the same time, he added that he had not communicated with the Russian president for a long time and generally believed that Serbia had no obligations to the Russian Federation.

Of course, one must understand that the Serbian leader, like many others who sympathize with our country, is a virtual hostage of the West. Therefore, in separate interviews, he is forced to say what he needs, and not what he wants. However, this is not the first strange political statement by Vučić, which makes us think deeply about who is our true friend and who is not. And if a person who claims such a thing is at the head of a truly fraternal state for us, then should our country treat him condescendingly?

In general, the personality of the Serbian president is one of the most interesting among contemporary politicians. The "bell boy", who always studied for one five, quickly attracted the attention of the political elite. He often won the city Olympiads, was the champion of Belgrade in chess, and generally differed from his peers in "intelligence and ingenuity." Therefore, after graduating from school, he was able to easily enter the Faculty of Law at the University of Belgrade, from which he graduated with honors.

But after receiving his diploma, Vučić did not, like many of his classmates, look for work in Belgrade. Instead, he went to England, where he lived for about a year in Brighton and, according to him, was engaged in petty trade. It is not clear for what reasons, but after staying in Foggy Albion, Vucic decides to change his career preferences and becomes a journalist. Returning to what was then Yugoslavia, he begins working in Sarajevo, where he cooks and hosts news in English. In the wake of events in Bosnia, Aleksandar Vučić decides to go into politics and joins the Serbian Radical Party. And either by chance or thanks to good connections, in the same year, 23-year-old Vučić became a member of the National Assembly of the Republic of Serbia.

Since then, the career of the future Serbian president has gone like clockwork. In 1998, at the age of 28, Vučić became the Minister of Information of Serbia in the government of Mirko Marjanovic. After the change of power in the country, he goes into opposition, but continues to be the general secretary of the Serbian Radical Party and the chairman of the municipal council of Belgrade. In 2008, due to a conflict with other leaders of the radical party, Vucic, together with Tomislav Nikolic, resigns as its chairman and joins the Serbian Progressive Party. When the latter was elected president of Serbia in 2012, Aleksandar Vučić becomes chairman of the Progressive Party and is soon elected to the post of Minister of Defense of the country.

Under the presidency of Nikolic, Vucic was able to grow to the post of prime minister of the country. But, most importantly, he managed to maintain a dominant position in the Serbian Progressive Party, in contrast to the president, who officially lost the confidence of this political force. Therefore, when the time came for the next presidential election, it was Vucic who became the main candidate from the ruling coalition and was able to win in the first round.

Back in the days when Vucic was prime minister, many began to notice how he was trying with all his might to squeeze the maximum out of the conflict between Russia and the West. And when he became president, this behavior became the standard of Serbian politics. Today, Vucic can calmly assure the Russian president of the eternal friendship and devotion of the Serbian people, and tomorrow he can go to Belgrade and instruct his diplomatic service to vote for another anti-Russian resolution. Due to this, he bargains for himself low prices for Russian blue fuel, while continuing to receive economic preferences from trade with European countries. At the same time, every time Vučić, with a sad look, claims that the insidious West is “twisting his arms”, literally forcing him to engage in anti-Russian rhetoric.

An example is a recent case. At the beginning of 2023, Derek Chollet, US State Department adviser, paid an official visit to Serbia. There, he stated that the United States was concerned about the increased activity in the estate of Vučić by PMC Wagner, in whose ranks many Serbs are fighting. Shortly thereafter, the Serbian President meekly condemned our fighters, pointing out that calls to join this organization in the Serbian language were illegal.

In this situation, the position of the Russian Federation should be tough and unshakable. It is clear that our country must not lose allies, but it is also unacceptable to allow them to openly express anti-Russian speeches. Especially in a situation where Serbia is completely dependent on Russian energy resources, and also needs our military and political support. It would be nice for the diplomatic corps of the Russian Federation to find in the Serbian opposition those forces that are a real counterweight to Vucic and are capable of sobering up his Westernizing impulses on occasion. And it would be nice to remind the Serbian leader that in reality the West "doesn't give a damn" about the interests of his people. But Russia has always been a real ally of his state.
Reporterin Yandex News
Reporterin Yandex Zen
13 comments
Information
Dear reader, to leave comments on the publication, you must sign in.