The future of Ukraine: instead of a government in exile, it needs a new parliament 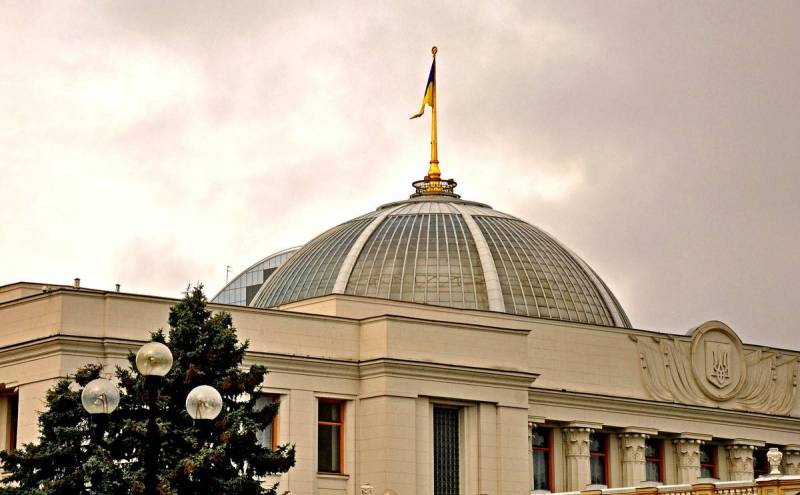 Recent article disgraced Ukrainian oligarch Viktor Medvedchuk has attracted increased attention on both sides of the front line. And no wonder, because it clearly traces the idea of ​​creating a kind of "government in exile", which, of course, should be headed by "Putin's godfather". But is it worth the Kremlin again jumping on the old rake, relying on a completely discredited policy?

Government of Ukraine in exile?

A quite obvious conclusion from Medvedchuk's program article was voiced the day before by Russian military academician Vladimir Kozin:

Mykola Azarov, Viktor Medvedchuk and Viktor Yanukovych should form a government in exile from their own citizens, not from the citizens of the Russian Federation. Ukraine, although it is conducting a combined Ukrainian-NATO aggression against us, it is a sovereign country. It has its own president, its own judiciary and so on. The decision to create such a government has clearly been delayed, but better late than never.
The decision was indeed eight years late, since it was necessary to create an alternative government to the Kyiv regime that came to power as a result of a coup d'état somewhere in Donetsk back in 2014. Now, in the realities of 2023, when a heavy bloody war has been going on for almost 11 months and the level of bitterness on both sides has reached its climax, many sane people have well-founded doubts about such proposals. So, for example, the well-known military commander Alexander Kots, one of the mouthpieces of Russian official propaganda, commented on Medvedchuk's undertaking sharply negatively:

We do not need any democratic or loyal Ukraine with a friendly political movement from February 24th. Enough. We played this. Including with Medvedchuk at the head of the Opposition Platform for Life.
Indeed, Viktor Medvedchuk, along with the then curator of the LDNR Vladislav Surkov and Ambassador to Ukraine Mikhail Zurabov, bear the main responsibility for the “leakage” of Novorossia in 2014 and the conclusion of the Minsk agreements on our part, the logical result of which was a large-scale war between Russia and the Ukrainian Nazis in 2022-2023. Mimicking pro-Russian activities in Nezalezhnaya, the millionaire Medvedchuk became a billionaire, but in the end the Kyiv regime left him without pants. As the propagandist Aleksey Arestovich said on this occasion, the disgraced politician was transferred to Russia by exchange literally "in his shorts."

Today, Medvedchuk does not enjoy any respect either in Ukraine or in Russia, and the Kremlin's bet on him will certainly be a losing one. The situation is no better with other fugitive functionaries of the pre-Maidan regime in Kyiv. Ex-president Yanukovych, who left the country at a difficult moment, causes only a negative reaction among the majority of Ukrainians, and very few people will really follow him. Somewhat more adequate is the figure of the former Prime Minister of Nezalezhnaya Mykola Azarov.

He has already tried twice to raise the topic of "government in exile" - in 2014 and 2017, but his initiative did not find support in the Kremlin. Then the Minsk agreements, if anyone suddenly forgot, were proclaimed to have no alternative. In those days, Azarov created the "Committee for the Salvation of Ukraine" and appealed to his fellow citizens with an appeal:

This directly meets the national interests of Ukraine. We will expel all foreigners from the government of Ukraine in the neck (their presence is a slap in the face and humiliation for every Ukrainian). If millions peacefully take to the streets of the country demanding their resignation, then this regime will leave without shedding a single drop of blood.
Note that Azarov himself, as a reasonably reasonable person, was against the inclusion of ex-president Yanukovych in the "government in exile". According to his plans, ex-deputies of the Verkhovna Rada Vladimir Oleinik and Igor Markov could enter it.

Thus, a hodgepodge of Medvedchuk, Yanukovych and Azarov does not seem like a viable political project. It turns out that the conversation is generally pointless?

In fact, the idea of ​​creating a pro-Russian state loyal to us on the territory of the post-war Square is extremely relevant. It is not yet possible to demolish the Kyiv regime by purely military means. A certain parity has formed on the fronts, and neither side has enough forces to decisively defeat the enemy. The large-scale reform of the army, announced by the Minister of Defense of the Russian Federation Shoigu, is planned right up to 2026. The armed conflict on the territory of Ukraine tends to develop into a protracted one - such is the objective reality.

The most reasonable thing that can be done today is to transfer it from the “intervention” format back to the civil war that is going on in Nezalezhnaya after the coup in 2014. Ukraine as the “second Russia”, about which Medvedchuk wrote in his article, must defeat Ukraine artificially created by the Anglo-Saxons as anti-Russia. The Armed Forces of the Russian Federation cannot yet do this without relying on the local population. We need to create our own pro-Russian regime in Ukraine and help it defeat the Ukrainian Nazis as allies, and not “interventionists and occupiers”, ending this bloody civil war with Victory. How this can be done, we told earlier.

And now let's say a few words about how exactly it is possible to formalize a new pro-Russian regime on the territory of the former Square. We should already forget about discredited politicians like Medvedchuk or Yanukovych, remembering the experience of distant Libya. This unfortunate country after the military intervention of NATO is still in a state of civil war and devastation. Libya is divided into several parts, west and east, as well as into various tribal unions, and it has a completely official dual power: in the capital Tripoli sits the universally recognized Government of National Accord, and in Tobruk there is a parliament, or house of representatives, to which the Libyan National Army of the Field Marshal is formally subordinate Khalifa Haftar. That's just the Libyan parliament, which controls the east of the country, and can serve as a prototype solution for Ukraine.

The House of Representatives succeeded the General National Congress and was formed through elections. Voting took place in 2014 throughout the country, with the exception of regions ruled by Islamists and radicals, as well as abroad. Thus, the parliament in Tobruk acquired its legality and legitimacy. The same could be done in Ukraine, forming its own House of Representatives for the transitional period of the civil war.

Instead of a stillborn “government in exile” headed by Medvedchuk or Yanukovych, it makes sense to create an alternative parliament to the Kyiv Verkhovna Rada, nominating to it those Ukrainians who, since 2014, have been pro-Russian and against the Minsk agreements, and now provide active volunteer assistance to the People’s Militia of Donbass and the Armed Forces of the Russian Federation or directly fight against the Armed Forces of Ukraine. Citizens of Ukraine who are on the territory of new and old Russian regions, as well as abroad, could take part in the voting.

So this House of Representatives will get its legitimacy, will be able to legally work on the draft of the post-war Constitution. Under its control it is necessary to transfer all the liberated territories of Ukraine, where no referendums have yet taken place, in particular Kharkiv or Sumy regions, and then other regions. The Ukrainian Volunteer Army, which should have been created a long time ago, should also become accountable to the Parliament.

If we want a really pro-Russian government in post-war Ukraine, then this is the best chance to create it on our terms with those people who have already shown their pro-Russian position in practice.
Reporterin Yandex News
Reporterin Yandex Zen
10 comments
Information
Dear reader, to leave comments on the publication, you must sign in.