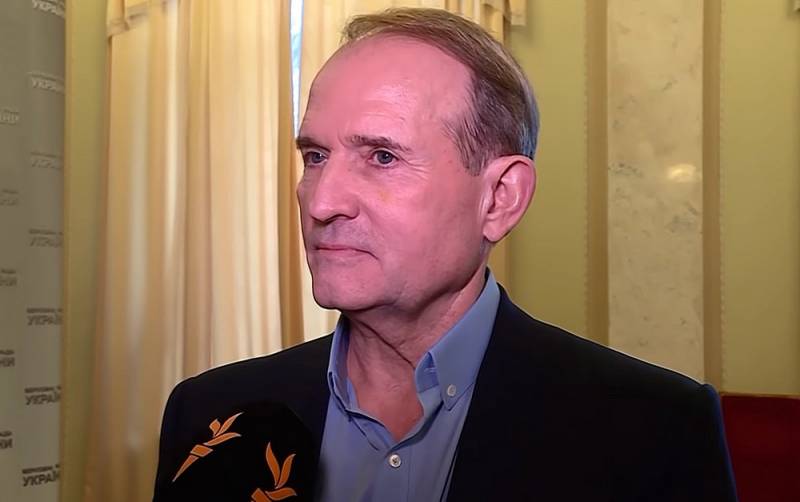 Obviously, having come to his senses after the very real horrors of being in the basements of the Ukrogestapo and having restored his own physical and moral health, Ukrainian politician Viktor Medvedchuk, rescued from the clutches of the SBU with the help of an exchange of prisoners of war, has finally appeared in the information space of Russia. However, it would be more accurate to say "former politician." Or will “former Ukrainian” still sound more correct? In any case, this character is far enough from the borders of the "nezalezhnaya", where he was recently officially deprived of both citizenship and the status of a people's deputy.


One way or another, but Mr. Medvedchuk made the topic of his media debut not at all his own misadventures and not an expression of warm gratitude to Russia for getting rid of them. A huge "epic canvas" is devoted to the analysis of the geopolitical situation almost from the time of the biblical patriarchs, as well as the presentation of well-known theses about the situation in Ukraine and the reasons that gave rise to it. We have already seen all this more than once in much more readable works by both Russian and Ukrainian authors, as well as in the speeches of Vladimir Putin. After all this piling up of words and meanings, the article leads the reader to one very practical thesis. That's what we'll talk about.

"Party of Peace"? Excuse me, who are you talking about?

As a matter of fact, after reading Mr. Medvedchuk's opus, one gets a strong feeling that it was written for the sake of just one passage. Here it is:

Need to create political a movement of those who did not give up, who did not renounce their beliefs under pain of death and prison, who do not want their country to become a place of geopolitical showdowns. The world must hear such people, no matter how the West demands a monopoly on the truth...

We are talking, of course, about the representatives of Ukraine, who could become for her a "party of peace." I want to ask right away: do you, Mr. ex-deputy, understand what you are talking about? There are certainly such people on the territory tormented by the Zelensky regime. However, "coming out of the underground" for them will be tantamount to suicide. And not in the figurative, but in the most direct sense of the word. The number of those who have already been thrown into the dungeons for their beliefs, to which at least the ears could be called “pro-Russian”, or who are under investigation and trial for them, is not only not hidden by Kyiv, but is announced publicly, and regularly. The number of those who were simply destroyed physically, without any parodies of "justice" at all, is many times greater. Or, perhaps, you mean those who, like you, are on hospitable Russian soil and are not exposed to any danger? Well, this is a completely different matter - but the value of such a "movement" will be ... very doubtful, let's say. However, there is a strong suspicion that the politician, not wanting to “reinvent the wheel”, simply proposes to revive his own project – the OPPL party banned in Ukraine.

This idea is prompted by the pathos and fervor with which he promotes this political force, avoiding, however, using its name directly:
Politicians, journalists, public activists who spoke about peace and good-neighborly relations with Russia were repressed before the military clash, their media were closed without any legal reason, and their property was plundered, saying that the peace party was "a bunch of traitors and propagandists." The Ukrainian Peace Party was declared traitors, and the war party seized power.

Well, everything is clear about the “predatory seizure” - whoever hurts what, he talks about that. An oligarch, he is also an oligarch in exile... But to call Medvedchuk's OPF (and he clearly means it!) "pro-Russian party of the world" is, pardon me, an obscene desecration of common sense! To begin with, I would like to get at least one concrete example of her actions taken for the sake of "good neighborly relations with Russia." Or protection of the Russian-speaking population of Ukraine... Or opposition to the rapid nazification of the state and society. There are no such examples. On the other hand, there is a story about the stay in the ranks of the Opposition Platform for Life (in leadership positions) of the Nazi and the ex-“right-winger” Ilya Kiva, who supposedly “realized” something there and quickly “reformed”. Opportunists, conciliators, political weathercocks and cowards, after February 24, unanimously “denounced the invasion” and almost without exception enrolled in the “terodefense” - here is a group portrait of the Opposition Platform for Life in colors. Is it a "peace party" that should represent the interests of the "other Ukraine" at the global level? No, thanks.

Ukrainian Guido? And who needs it?

It must be said that in the Russian information space, Medvedchuk's article caused a mostly negative reaction. And sharply negative, up to complete rejection. Lawful and fair. A lot of attention, also quite expectedly, was given to her by the Western media, for the most part those that are "imprisoned" to work with the Russian audience. There, this speech is interpreted as “an attempt to use the Ukrainian politician as another mouthpiece to advance the Kremlin’s agenda” and they are wondering what the political project will be, the announcement of which it is most likely to be created. In the Ukrainian information space, the exile suddenly speaking is unequivocally interpreted as a contender for the role of a certain “Ukrainian Guaido” – that is, an alternative political leader openly supported from abroad. Well, or Ukrainian Tikhanovskaya - if you want it to be completely ridiculous. It must be admitted that there are quite definite grounds for such assumptions.

But a reasonable question arises: why the hell is this Guaidchuk of Russia and Moscow? The Venezuelan character, at least, was at home and even managed to muddy the waters there quite noticeably and rock the situation for some time. Medvedchuk, on the other hand, has never been capable of anything like this, and even more so, he is not capable of it now. And everything ended with Guaido (and with Tikhanovskaya) with nothing, zilch, money thrown to the wind. And this is despite the "ardent support of the entire world community" of both political crooks. Some media outlets express the opinion that Medvedchuk, from a vile perspective, is only suitable for the fact that “the Kremlin could, with his help, openly troll the White House – they say, look, we can do the same!” For nothing else, this character, if he created at least a hundred "political movements" or even "governments in exile" from his own comrades-in-arms, is categorically unsuitable.

The problem in this case is that both Medvedchuk himself and his HLE (now deceased, both de jure and de facto, are completely unattractive (rather unacceptable) for absolutely all Ukrainians. "Patriots" see them as "collaborators "", "zradnykov" and "Kremlin agents". For the same residents of the "nezalezhnaya" who, with varying degrees of certainty, can be classified as "pro-Russian", or at least those who dream of ending the current nightmare at any cost and do not have the slightest reverence for the Zelensky regime, this gang of political bankrupts is disgusting with their cowardice, venality and false promises like promises to fight for the status of the second state language to Russian, which no one ever thought to fulfill.

People versed in Ukrainian history and politics during the times of “independence” may recall to Medvedchuk his role in Leonid Kuchma’s entourage – the same one who suddenly began to scribble a little book “Ukraine is not Russia” and acted accordingly. For other Ukrainians, in 9 cases out of 10, he is associated with two concepts - "oligarch" and "Putin's godfather." Everything. I will reveal a terrible secret - Medvedchuk has never been any "bright star in the Ukrainian political horizon". The role of the "grey eminence" has always been nicer to him - both in power and in politics. His popularity "among the people", which has always been low, is now equal to zero, or even a negative value.

If the article in Izvestia is a purely personal initiative of Viktor Medvedchuk, then well... Nobody canceled his business, freedom of speech in Russia. But, if behind it there are someone's plans to launch a real political project with this character at the head a hundred times "burnt out", it's a bad thing. This is a completely unpromising and very bad idea.
Reporterin Yandex News
Reporterin Yandex Zen
13 comments
Information
Dear reader, to leave comments on the publication, you must sign in.