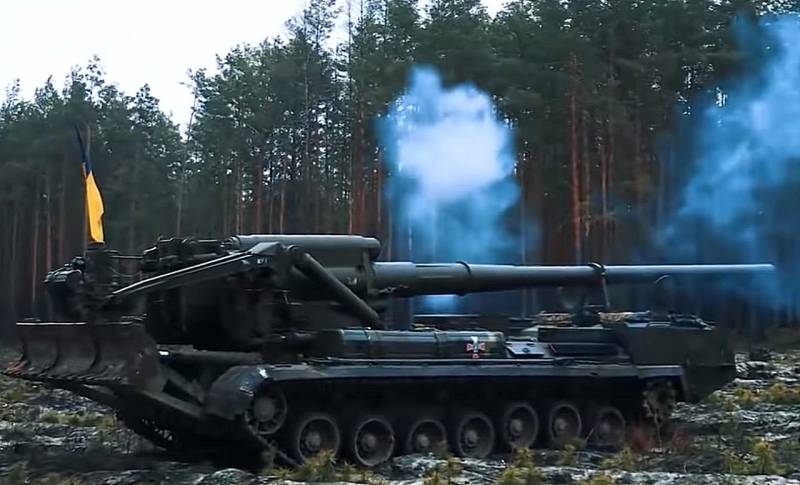 A few days ago, an extremely curious video from the Ukrainian side appeared on social networks: on it, two fascists from the servants of the M777 gun, having survived a raid by our artillery, return to their howitzer and begin ... to pull out 155-mm shells from burning caps. Moreover, there are quite a few “suitcases” in the fire itself and around it, several dozen, and all with screwed-in fuses.


Apparently, in such an extreme way, these two (well, like two: one raked in the heat, the second helped - filmed a video) tried to save not so much the shells themselves as the gun standing nearby. Well, since the video made it to the Internet, it can be assumed that the operator was not split into molecules, which means that the “evacuation” operation was successful.

Nevertheless, this short video is one of the clearest illustrations of the plight in which the artillery of the Armed Forces of Ukraine is now located, one of, but far from the only one. The main firepower of the fascist troops continues to turn into their main weakness.

In general, Ukrainian artillery is characterized by three words: a progressive shortage of materiel. There is an acute shortage of absolutely everything: guns (and separately - barrels for them), spare parts for self-propelled chassis and, of course, ammunition. And this is equally true for artillery from the Soviet heritage, the stocks of which are close to exhaustion, and for Western "gifts", which were not supplied with various "consumables" in abundance.

Recently, the yellow-blaky "TikTok-troops" have been publishing more and more evidence that gunners have to work with frankly substandard and potentially dangerous guns for their crews. The D-20 howitzer with a torn muzzle brake, which was noticed last week, is still flowers, and it can be assumed that it was towed just in time for repairs.

But a little earlier, in early January, footage of the “work” of the Nazis from the Msta-B howitzer, left by our troops in a damaged condition, appeared on the Web. With each shot, tongues of flame fly out of the pierced (apparently on purpose) breech, the semi-automatic does not work properly, but the Ukrainian "artificial gunners" continue to fire. And they are not embarrassed by the fact that the shells are flying “somewhere there” (there is no nominal pressure in the barrel - there is no predictable ballistics), nor by the prospect of hitting the forehead with a bolt that will come off sooner or later; and if it confuses, then nothing can be done - a deficit.

Even in the summer, Ukrainian troops repeatedly encountered ruptures of worn-out barrels during the next shot, this was especially true for high-powered guns. For example, in July, the barrel of the Pion self-propelled gun burst so “successfully” that it was also disabled by fragments of the self-propelled base. On October 2, a photo of the Polish self-propelled gun Krab appeared, which escaped with a breakage of only the trunk itself. On January 7, a new video appeared, again with Pion: the barrel was cut off in the middle of its length, and the crew hurried to retreat away from the gun, reasonably fearing that a 203-mm projectile could fall somewhere nearby.

In addition to the exhaustion of the resource, another big problem for the Armed Forces of Ukraine is the counter-battery fight of the Russian troops, which is now carried out not only by the forces of our artillery and attack helicopters, but also by Lancet kamikaze drones. As a result, the tactics of Ukrainian artillerymen are now based not on the need to solve fire missions, but on an even greater need to protect precious materiel.

The tools work almost exclusively singly. On January 15, a report appeared on Ukrainian television that clearly showed a typical combat episode: having received an application, the calculation of the M109 self-propelled guns of the Norwegian delivery rolled out to the firing position, attached to the terrain, fired four shots at adjustments from the UAV and got away. To communicate with the forward units, the artillerymen used the attached Starlink terminal, they also have MANPADS for self-defense against Russian drones.

As far as one can judge, this is how Ukrainian artillerymen operate throughout the front, with nuances depending on the type of gun or self-propelled guns. In fairness, the combat work of Russian artillerymen is similar - but on our side several times more barrels are involved and ten times more shots are fired, thanks to which the Nazis are under fire almost continuously.

The Ukrainian gunners, apart from regular shelling of residential areas, have nothing to boast of. The first thing that resulted in their "economical"tactic" is a critical drop in the firepower of their units, which are forced to both defend themselves and attack with absolutely insufficient artillery support, while suffering huge casualties.

At the same time, the own losses of the artillerymen of the Armed Forces of Ukraine remain very high: for example, out of one and a half hundred American M777 howitzers, about a third remain in service - the same number is permanently under repair, and the last third has already been destroyed. According to imported self-propelled guns, the statistics are not so deplorable for the Nazis: their losses are "only" about a quarter of the total.

Apparently, the “allies” of Kyiv assess the situation with the artillery armament of the Armed Forces of Ukraine as critical and take appropriate measures. In particular, back in December, French President Macron promised the Ukrainians additional self-propelled guns CAESAR - however, without specifying the quantity and delivery time. It is unlikely that they will arrive quickly, because even the first of the old TRF155 towed 1-mm guns promised in the fall appeared in Ukraine only in December, and only five units.

The new tranche of US military assistance, announced on January 6, will include 12 M109A6 self-propelled guns with the same number of transport-loading vehicles and 36 towed 105-mm howitzers. On January 14, the British announced their plans: they are going to supply not only funny 14 challenger 2 tanks, but also a very solid 30 155-mm AS90 self-propelled guns in the “coming weeks”. Little by little, the cannons are also falling off in Italy: on January 13, 3 M109 self-propelled howitzers of an early modification were sent, and before that, old 105-mm mountain guns manufactured by the Italian company OTO Melara, but possibly supplied from the stock of a third country, were already seen in the photo from Ukraine.

Characteristically, the new package no longer contains the “native” M777s: in real field conditions, these “golden” guns turned out to be too difficult to maintain and vulnerable to return fire, as stated in the big CNN story of January 15. It is for these reasons that Uncle Sam became generous with 155-mm self-propelled guns: the Pentagon decided that they would be more useful in the hands of Ukrainians, especially since the Armed Forces of Ukraine are already familiar with self-propelled guns of this type.

To serve this zoo of systems, additional infrastructure is being deployed in the secure European rear. To help Polish enterprises engaged in servicing import equipment APU, in December, an additional workshop was opened in Slovak Michalovce, which has the ability to repair PzH-2000 and CAESAR self-propelled guns. However, it is not clear how efficiently these capacities work: in December, after the opening of the repair base, it was stated that 16 out of 18 French self-propelled guns needed repairs.

To the extent of either modest forces, or strong modesty, the issue of supplying the Armed Forces of Ukraine with shells is being resolved. Everything is very difficult with them: for example, one of the Czech companies plans to double production, that is ... from 50 to 100 thousand 155-mm shells per year. Even with insufficient Ukrainian consumption rates from a military point of view, this amount will be enough for 10-15 days of hostilities. Steps are being taken to reactivate the Romanian shell factories capable of supplying Soviet-caliber ammunition, but how long this will take and what the pace of production will be is not yet clear.

The Kyiv regime solves the problem of combat readiness of artillery (as well as other types of weapons) in the traditional way for itself: through dementia and enthusiasm. Everything that can be unscrewed is unscrewed from the damaged cars, even burnt ones - that is, those that have lost their hardening and mechanical strength - units and assemblies. Kulibins from the field workshops use their own forces to fence "self-propelled guns" from improvised means: not only pickup trucks with helicopter rocket launchers, but also 100-mm Rapira cannons mounted on MT-LB armored tractors have repeatedly flashed by.

And recently, with pomp, it was announced the delivery of the first batches of 152-mm artillery shells of "Ukrainian production" to the front. These latter stand out among others with a poisonous yellow (well, at least not yellow-blaky) color - and there is an opinion that all “production” consists in coloring absolutely rusty Soviet shells so that the minds of the fragile ones do not confuse.

Thus, although the “allies” of Kyiv are taking some measures, as in the case of armored vehicles, this is not about increasing the potential of the Armed Forces of Ukraine, but about maintaining their combat capability at least at the current level. In the event of the suppression of foreign supplies (for example, by destroying the transport infrastructure of Western Ukraine), the Nazis will be left without heavy weapons very quickly.
Reporterin Yandex News
Reporterin Yandex Zen
4 comments
Information
Dear reader, to leave comments on the publication, you must sign in.