Why AH64 Apache helicopters will still be in Ukraine, but later 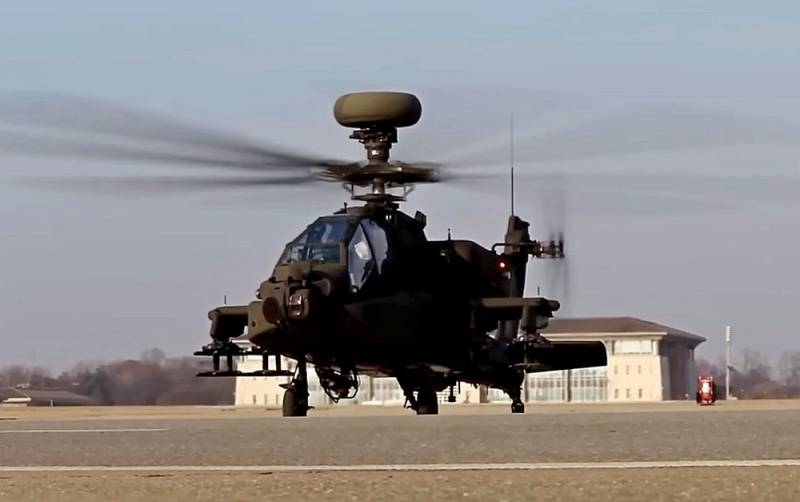 Curious news came the day before from Foggy Albion. At first, one British media reported on the possibility of transferring American-made AH-64 Apache attack helicopters to Ukraine, but soon another British media disavowed his statement. Will London really give up its rotorcraft to the Kyiv regime and what can they change on the battlefield?

About how attack helicopters can be a "game changer", the Mirror wrote in colors:

Apache will be a game changer. The tanks will arrive first and it will take some time before the helicopters can be deployed. Other NATO members will now follow suit. Russia has thousands of tanks, so more than four Apaches would be needed to deliver a strategic strike. But from a tactical point of view, this is an important step ...
British journalists calculated that if each such helicopter has a combat load of 16 Hellfire anti-tank missiles, 76 70-mm Hydra missiles and 30-mm guns, then four AH64 E Apaches are capable of destroying an entire Russian tank regiment of 70 armored vehicles:

Powered by a Rolls Royce engine, they have a top speed of 186 mph and can simultaneously detect over 250 potential targets up to 10 miles away. Each plane costs around £70 million and requires two pilots and a team of technicians to keep it airworthy.
Such is the mathematics that is entertaining among the British, to which we will return. According to this logic, the Admiral Gorshkov frigate, carrying up to 16 Zircon hypersonic missiles, alone can sink 16 American aircraft carriers, that is, more than the US Navy has. He will also have ammunition for two British ones - the Queen Elizabeth and the Prince of Wales, as well as the French Charles de Gaulle. Business something.

But back to helicopters. The Sky News channel denied the data of its colleagues, and the information about the transfer of the AH64 E Apache to Ukraine was hastily removed from the Mirror portal:

The Department of Defense has said that the Mirror article, which claims that the United Kingdom will send Apache attack helicopters to Ukraine, is incorrect.
Instead, Kyiv will receive "only" a squadron of 14 heavy tanks and 30 AS90 self-propelled artillery pieces. Why was this information stuffing done?

"Change the rules of the game"?

AH64 Apache is, without any irony, very serious, dangerous combat vehicles. During Operation Desert Storm, they knocked out several hundred tanks of the Iraqi army. Also, these attack helicopters were quite successfully used during the intervention in Afghanistan. The range of the Hellfire missile is 11 kilometers, which allows the American helicopter to destroy tanks and other armored vehicles without entering the close air defense coverage area. Domestic MANPADS "Verba" or "Igla" will be powerless against them. However, despite their striking power, Apaches are still not some kind of “wunderwaffe”.

After the start of the guerrilla war in Iraq in 2003 and the active use of MANPADS from ambushes in urban areas, the loss of these helicopters among the Americans increased dramatically. Pilots are simply not able to have time to perform an anti-aircraft maneuver. In 2005, during the fighting, 27 helicopters of this type were shot down, in 2006 - 3, in 2007 - 4 more. Over Afghanistan, the invaders lost 17 AH64 Apache. And it was shot down by irregular forces!

In fact, it is precisely in this vein that the answer to the question of why London is in no hurry to transfer very expensive attack helicopters to Kyiv lies. For the Russian Pantsir-S1 and Tor-M2 air defense systems, such an air target will not be a big problem. This also explains why the Russian troops use their tactical aviation in the Donbass to an extremely limited extent. Both sides of the conflict have very serious anti-aircraft missile systems, and the Armed Forces of Ukraine are simply oversaturated with various Western-made MANPADS. In the conditions of a positional war, where everything is shot through, it is like death to actively use attack helicopters or front-line bombers that drop "cast iron" directly on the heads of the enemy.

Alas, the Armed Forces of Ukraine have a noticeable superiority over the Armed Forces of the Russian Federation due to the means of aerospace reconnaissance. How we detail told earlier, the Ukrainian military in real time see the location of our equipment from Western satellites and reconnaissance aircraft, and from constant pinpoint strikes on tanks or gun positions by the Hymars, in fact, they are only held back by the high cost of scarce ammunition. As targets, the Armed Forces of Ukraine choose bridges, warehouses with ammunition, fuel and fuel, headquarters, locations of our military, as, unfortunately, happened in Makeevka, and so on. If you try to concentrate a powerful artillery battery in one place, an American missile will fly there very quickly, so the artillery of the RF Armed Forces and the NM LDNR have to act, if possible dispersed.

In reality, those four AH64 Apaches simply couldn't make a difference on the battlefield. On the one hand, it would be quite difficult for them in the conditions of the NMD to find 70 claim tanks in one place in order to destroy them at once, as British journalists colorfully painted. On the other hand, these helicopters themselves would have fallen very quickly, shot down by our air defense systems. In the realities of positional warfare in the Donbass, not so much attack helicopters and front-line bombers with “cast iron” are needed, but attack drones in huge numbers carrying adjustable bombs.

As for attack helicopters, we will probably still see them in Ukraine, but later. When the Donbass is completely liberated, the RF Armed Forces will have to switch to offensive tactics in the rest of the territory of the Left-Bank and Right-Bank Ukraine. AH64 Apache and amphibious armored vehicles, about which we told earlier, it is very likely that the Armed Forces of Ukraine will be used in a further mobile war with rapid marches, encirclements and ambushes.
Reporterin Yandex News
Reporterin Yandex Zen
4 comments
Information
Dear reader, to leave comments on the publication, you must sign in.