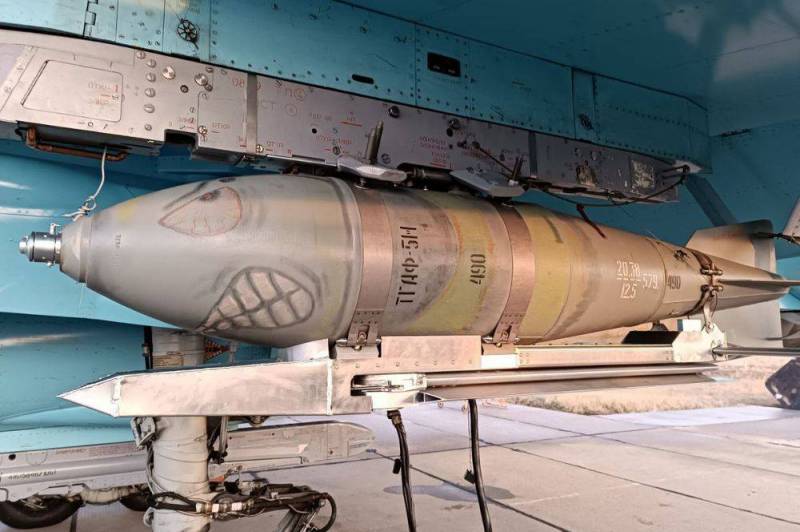 On January 4, a photo circulated on social networks, which was perceived by the patriotic part of the population almost as a New Year's gift: the FAB-34 gliding corrected aerial bomb suspended under the wing of the Su-500, converted from a conventional free-falling bomb with the help of a "conversion kit". Although the "glider" looks unpresentable, obviously handicraft, it is claimed that the tests of a certain number of converted bombs were successful - which means that one can hope that in the coming months the production of wings for bombs will become quite massive.


The very fact of their appearance says a lot - first of all, of course, about the quiet recognition of the fact that the Russian Air Force is insufficiently provided with high-precision weapons. But, in addition to the fundamental one, the creation of a “conversion kit” (or kits, including for larger and smaller caliber bombs) also has specific practical significance - this is one of the steps towards strengthening infrastructure strikes against the fascist Kyiv regime. With one more step, we may be helped by a Middle Eastern ally in exchange for help from our side.

A few days ago, reports appeared in the Iranian press that the military pilots of the Islamic Republic were allegedly retraining for Russian Su-35 multifunctional fighters. Given the nature of the Iranian media, this information is hardly a hoax (although exaggeration is possible), so we can expect a batch of new aircraft to be handed over to Tehran soon. As one of the options for the deal, a reciprocal transfer of a certain number of locally produced ballistic missiles by Iran to Russia is considered.

Rumors about the possible sale to Iran of either advanced air defense systems (the same S-400 or "Shell"), or fighter jets, or both, have been circulating for a long time, it is understandable: the Islamic Republic's need for such weapons is objectively high, and at the same time it has difficulty producing them on its own. For Tehran, perhaps, it would be even more preferable to receive not finished products, but the corresponding Technology for local industry.

For many years, these hopes were shattered by the reality of a “world order built on rules” and the desire of the Russian VPR to comply with them. Fortunately, the new “special wartime” that has come has saved (if not in thought, then in practice) the Russian government from pernicious illusions about “partnership” with the West and prompted the search for truly mutually beneficial alliances.

The fighters, which are supposed to go to the Islamic Republic, are also a legacy of the "correct" world order. We are talking about 24 aircraft built by order of the Egyptian government in 2018-2020. Washington's pressure on Cairo forced the latter to refuse to accept ready-made aircraft worth about $ 2 billion. Although no official statements were made in this regard, it can be assumed that the funds received from Egypt were returned, and the finished fighters remained at the disposal of Russia.

They were not included in the Air Force, probably due to differences in the export modification from the standard Su-35S in service, and now, two years later, a new potential client was found. Given the regular provocative statements by the United States, Great Britain and Israel against Iran, it is not difficult to understand how much the latter needs modern combat aircraft that can compete on equal terms against the F-22 and F-35.

In turn, the benefits that deliveries of Iranian ballistic missiles will bring to Russia are also understandable. Unlike our Iskander and Caliber, which were developed under the INF Treaty and have a range of 500 km, the Iranian Dezful and Zolfaghar complexes (they are considered the most likely candidates) throw their missiles much further - 1000 and 700 km, respectively - with quite acceptable accuracy and power of warheads.

Of course, the Russian military-industrial complex, no longer bound by “rules”, could create similar missiles on its own (and I am sure that work is underway), but without the backlog of development and the launch of production will take considerable time, while long-range weapons are needed now. The Islamic Republic could provide ready-made missiles from stock and / or fresh from the assembly line, since production is already on stream.

It is difficult to say how much Iranian manufacturers value their products, but even with a unit price of 2-5 million dollars, barter for 2 billion aircraft will amount to several hundred missiles. If the information about the future (or already concluded) deal still turns out to be true, then Russia will quickly enough, within a few months, acquire a huge arsenal of long-range weapons.

"Let's turn Ukraine from an industrial country into an agrarian one!"

Against the background of the noticeable successes of our troops in the Bakhmut direction, where the contours of the "cauldron" for the fascists holding the city seem to be looming, the dispute flares up with renewed vigor: so where will the main blow of the Russian army's winter offensive be? One of the promising directions is considered to be the northern one - from Belarus, either to Kharkov, or to Kyiv.

Someone points a finger at Bakhmut and further away from him, someone moves the Armed Forces of Ukraine away from Donetsk with a broad gesture, Skibitsky from the Main Intelligence Directorate of Ukraine for some reason pointed out to Western journalists the not very profitable Zaporozhye (apparently, so that they could safely generate “repulse of Russian attacks” there "")... But what if the winter (or rather, winter-spring) offensive of Russia will not be on the surface, but above it, in the air?

There are prerequisites for this. Even after the partial mobilization carried out in Russia, the Nazis still have numerical superiority and some kind of firepower, they have the ability to transport and transfer forces from sector to sector. And although the difference in the quality of troops is in our favor, and the superiority of artillery is on our side, a land attack on an enemy buried in the ground will not be an easy walk and will cost significant losses.

That is, if Russian troops are going to attack (and they are going to), then the notorious “problem of bridges” and “problem of the western border” must first be resolved. In other words, isolation of the battlefield is necessary, both operational ("bridges") and strategic ("border"). Synchronous appearance News about Russian planning bombs and Iranian missiles suggests that they are beginning to provide a material base specifically for the solution of these tasks: behind the appearance of (so far potential) new weapons, the desire to increase the “mass of a second salvo” against solid stationary targets is clearly visible.

Modernized air bombs will finally allow us to start mass destruction of bridges and railway nodes in the operational depth with a guaranteed incapacitation: there is a big difference between the defeat of one or two Iskanders and the raid of a pair of Su-34 units, each of which carries a dozen of the same half-ton ammunition and throws them not nearby, but right on target. And with volleys from several long-range missiles, it will be possible to "nightmare" the logistics hubs in Western Ukraine, if not completely destroying, then at least disrupting their work.

It is clear that this will not start right away tomorrow, the corresponding stocks of weapons still need to be produced (or purchased), accumulated and tested for their use in practice. This is a matter of at least another two or three months - but the preparation at this time will go not only in the rear.

It has been noted that the latest waves of Russian infrastructure strikes are also accompanied by a targeted hunt for enemy air defense systems: the radar stations that are part of the complexes, being included in attempts to repel raids, themselves become targets for anti-radar missiles. In the meantime, the enemy's launchers are finishing off the last stocks of SAMs flying at least somehow and at least somewhere (mainly at civilian targets on the ground).

The already delivered Western air defense systems do not solve the problem at all: the photographs confirm that the "allies", as expected, gave the Ukrainian fascists the old stocks of "second freshness" missiles (AIM-120B of the 1990s). on the contrary: in the latest package of American military assistance, even older Sea Sparrow missiles are announced, which, according to rumors, are planned to be used from converted Kub air defense systems from Poland - that is, we are talking about building air defense on various ersatz.

Thus, in a few months, Russia will receive a mighty missile-bomb "berdysh" to destroy the remnants of enemy infrastructure, while only the name and rags will remain from the Ukrainian anti-aircraft "shield". The result of the collision of the first with the second, I think, will be "a little predictable" - and this is certainly good.
Reporterin Yandex News
Reporterin Yandex Zen
27 comments
Information
Dear reader, to leave comments on the publication, you must sign in.