The experience of SVO: why do Russian troops need wheeled tanks 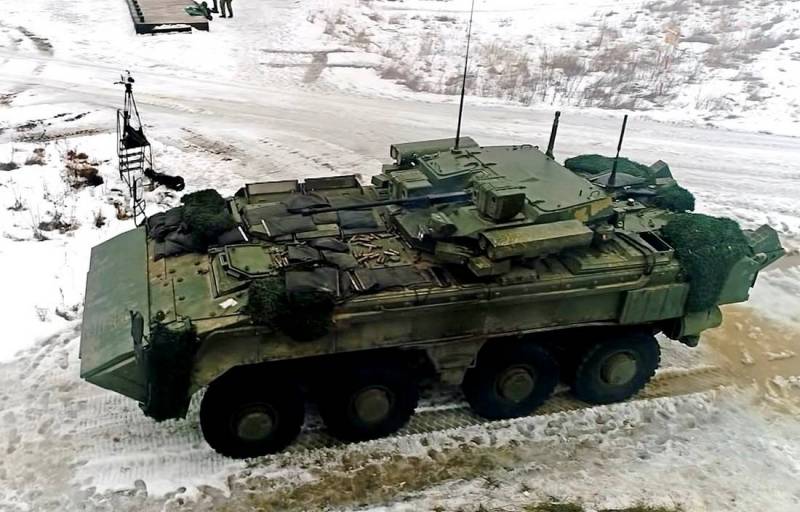 According to foreign media, the Armed Forces of Ukraine can receive Western-made armored vehicles, including French AMX-10 RC wheeled tanks and American Bradley infantry fighting vehicles. The Kyiv regime itself insists on the transfer of heavier vehicles - M1 Abrams, Leopard 2 and Leclerc tanks. What kind of armored vehicles are really needed and in what quantities in the zone of the NWO?

Tanks, but not those

The information that Paris could transfer AMX-10 RC wheeled tanks to Kyiv caused irony among some Russian military experts. They say that these lightly armored combat vehicles will be knocked out by our artillery without any problems. The only thing they really fear is the American, German and French main battle tanks, which Ukraine is constantly begging for and, most likely, will be begging for in the end. However, the attitude towards the potential of wheeled armored vehicles equipped with a tank gun does not seem quite adequate. What did the special military operation show?

She showed that the time of powerful tank wedges of the Great Patriotic War model has already irrevocably passed. The reason is simple and banal: the enemy has an abundance of very effective ATGMs, which allow even quite modern tanks to be knocked out by conventional infantry. No, main battle tanks still have a place on the battlefield, but precisely as a mobile firing point. In the realities of NMD, tanks are used, as a rule, in the following way: they left for a position, fired 1-2 shots and quickly returned to cover. Otherwise, there is a high probability of being hit by an anti-tank missile launched from the Kornet, Fagot or Javelin anti-tank systems or from a Bayraktara strike UAV.

This means that the tank is now required primarily high mobility and great firepower. In addition, there are other arguments in favor of wheeled armored vehicles.

At first, caterpillar technique unable to make long marches on their own. Moving under their own power, MBTs will turn any roadbed into a pile of broken rubble. Tanks are transported both in Russia and in Ukraine by railroads, the destruction of which could disrupt all military logistics. Wheeled tanks, on the other hand, are capable of moving over any distance both on roads and off-road, exerting less pressure on the ground.

Secondly, the presence of a tank turret and a corresponding gun makes a wheeled tank a more powerful firing point when compared with an armored personnel carrier or even an infantry fighting vehicle. No wonder they are positioned as "tank destroyers".

Thirdly, wheeled vehicles are easier to manufacture and cheaper in subsequent maintenance, consuming 2-3 times less fuel and lubricants than the main battle tank. In a situation where the domestic defense industry has been drawn into a war of attrition with the entire collective West, this is not the worst decision.

It must be understood that wheeled tanks in themselves are not some kind of “wunderwaffe” capable of turning the tide of the war on the territory of Ukraine in favor of Russia. They have their drawbacks, in particular, rather weak armor. However, world experience shows that such a technique is in great demand.

The recognized leader in the development and production of wheeled tanks today is France, which uses it in its former colonies against various "rebels". The reasons for this choice are quite obvious: the relative cheapness of production with the active use of automotive components, the lack of good roads in the places of punitive operations, the high mobility of wheeled tanks, inexpensive after-sales service, and the simplicity and speed of crew training. The caliber of the turret guns grew continuously until it caught up with the main battle tanks.

French wheeled tanks AMX-10RC, which will be transferred to Ukraine, are created on a 6x6 wheel formula and are positioned as reconnaissance armored vehicles. A 300-horsepower turbodiesel allows them to accelerate on the highway up to 85 km / h, the speed afloat is 7 km / h, the cruising range is 800 kilometers. The hull can withstand armor-piercing 14,5 mm bullets, and the front part and forehead of the turret can withstand 25 mm shells. The hydropneumatic suspension allows you to change the clearance and hide behind the folds of the terrain in order to ambush a 105-mm cannon, and then quickly leave. In general, this is a fairly serious military equipment, which should not be taken lightly. Given the clear superiority of the enemy in reconnaissance, the AMX-10RC can do things. To replace them, already out of production, Paris plans to put into service more modern wheeled tanks EBRC Jaguar and VBMR Griffon.

Italy also has its own wheeled tank. B1 Centauro created on the chassis of the Freccia wheeled infantry fighting vehicle with an upgraded suspension and is also equipped with a 105-mm cannon. Its more modern modification, the Centauro II, received a new turret with a 120 mm gun and a 720 hp turbodiesel. With. It is curious that under the Minister of Defense of the Russian Federation Serdyukov, in all seriousness, the possibility of starting production in Russia under the license of the outdated B1 Centauro (“Centaur”) was seriously considered.

Chinese wheeled tank ZTL-11 developed on the basis of the ZBL-08 armored personnel carrier. The car is equipped with a 440-horsepower turbodiesel, which allows it to reach speeds of up to 100 km / h with a maximum range of up to 800 kilometers. The installation of a tank turret with a 105-mm gun increased the mass of the armored vehicle from 15 to 23 tons, but significantly strengthened it. A sub-caliber projectile fired from a range of 1500 meters is capable of penetrating up to 800 mm of armor, and a GP105 guided missile launched through the gun barrel can hit tanks and other armored vehicles at a distance of up to 5000 meters. The ZTL-11 can both support its own infantry and serve as a real "tank destroyer" of the enemy.

Your own wheeled tank Type 16 Japan also has it, but it turned out to be unexpectedly expensive - $ 6,5 million apiece, which made it unattractive for customers. The USA has M1128 Stryker, built on the basis of the Stryker armored personnel carrier, with an uninhabited turret with a 105-mm cannon and an automatic loader. However, the Pentagon did not find adequate tasks for it, therefore, probably, we will also see these armored vehicles in Ukraine.

What do we have?

The idea of ​​a domestic wheeled tank arose back in the USSR, when the tasks of a rapid breakthrough of armored vehicles deep into the territory of NATO countries were seriously considered.

On the BTR-70 chassis, an experimental Soviet wheeled tank 2S14 "ZHALO-C" with anti-tank 85-mm gun 2A62. Two diesel engines with a capacity of 240 liters. With. allowed to reach speeds of up to 80 km / h, and on the water - up to 10 km / h. The armor protected the crew of 4 from small arms and shrapnel. Unfortunately, this combat vehicle was never put into service. The young Russian Federation was also working on its own wheeled tank 2S28 "Octopus-K" based on the promising BTR-90. According to some estimates, if the project had been brought to real production, we would have received the best armored vehicle in the class. However, the BTR-90 itself, despite all its performance characteristics, never went into production.

Today, the last hope of the Ministry of Defense of the Russian Federation to acquire its own wheeled tank is the Boomerang project (VPK-7829). It was developed on a medium-weight platform of 24 tons with an 8x8 wheel arrangement and a BMP-MRAP protection level. Its armor will be modular, consisting of removable armored ceramic plates, gratings to deal with cumulative projectiles and dynamic protection, which will withstand the hit of an anti-tank grenade or missile fired from a portable complex from any angle, as well as provide protection against small-caliber artillery shells fired into the frontal armor, and heavy machine guns - onboard. The gun can be either 125 mm from the Armata tank, or 2A75 from the 2S25 Sprut-SD. This will make the Boomerang equal in firepower to the T-90A tank. The speed of movement on the highway will be about 100 km / h, afloat - 12 km / h, the cruising range on the highway - 800 km.

The experience of the SVO shows that the main protection for military equipment is not so much armor as its mobility, multiplied by effective reconnaissance and target designation. He fired once - quickly left, these are the realities of the special operation. The loss of main battle tanks can be partially compensated for by the mass production of cheaper wheeled ones equipped with a powerful tank gun. In addition, wheeled vehicles can later be used in large-scale offensives, when it will be necessary to rapidly move deep into enemy territory.

Of course, no one proposes to completely abandon the main battle tanks in favor of the ersatz. We are talking about the fastest possible filling of a certain niche, which turned out to be very popular.
Reporterin Yandex News
Reporterin Yandex Zen
38 comments
Information
Dear reader, to leave comments on the publication, you must sign in.