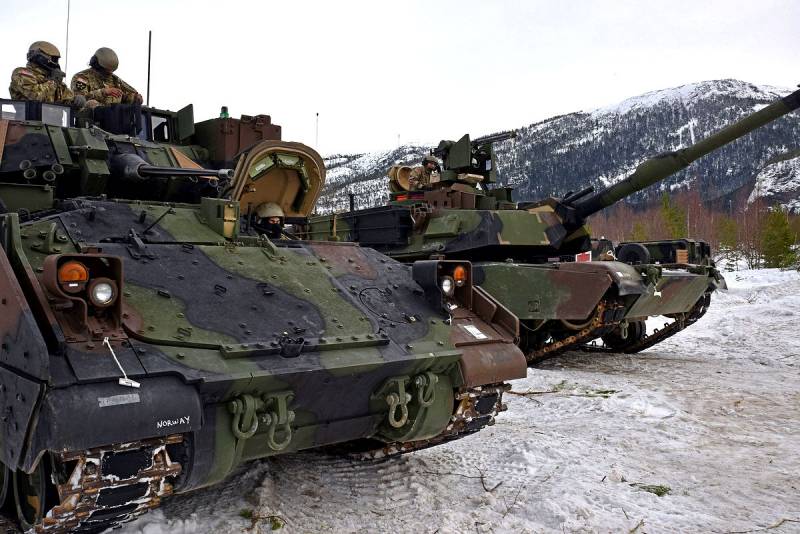 On January 5, information feeds were filled with messages in the vein “the ice has broken, gentlemen of the assessors,” dedicated to the supply of heavy armored vehicles to the Kyiv regime from the West.


First, French President Macron announced his intention to transfer the tanks to the Armed Forces of Ukraine, then it was announced that Bradley infantry fighting vehicles could be included in the new package of American military assistance. A little later, German Chancellor Scholz promised the fascists the BMP Marder through his teeth, and the last one was British Foreign Minister Cleverley, who pointedly hinted at the possibility of supplying tanks from the islands or from some allied countries. On January 6, there were also reports that Poland was allegedly considering the possibility of supplies from the presence of Leopard 2 tanks German production.

Ukrainian "roaring heads" from such News, backed up another Russian "goodwill gesture", were greatly encouraged. In particular, NSDC Secretary Danilov hastened to declare 2023 the “year of offensives” of the Armed Forces of Ukraine, which, in addition to armored vehicles and Patriot air defense systems, will also receive some kind of “secret weapon” from the West (somewhere I have already heard a similar story, year of commercials in the forty-fourth). The foreign press is dispersing analytics with might and main about how the new armored vehicles will increase the capabilities of three new army corps of the Armed Forces of Ukraine, numbering 75 thousand people.

But, fortunately for all normal people, in reality the picture is not at all as rosy as in enemy propaganda. By itself, a Soviet joke comes to mind: those promise tanks, these promise tanks - but there is a nuance.

The point is not only and not so much that promising does not mean getting married, but more that the “allies” are again offering Ukrainian fascists various kinds of illiquid assets, the combat value of which in the specific conditions of the Ukrainian theater of operations is rather doubtful. Or rather, it will be doubtful if and when any of the promised will still be on the front line.

To be fair this time technique, most likely, will reach Ukraine. For many months, the issue of supplies hung in the air for political reasons: European puppet leaders were thrown among themselves with the dubious honor of becoming the first "donor" of armored vehicles. Biden, having agreed to hand over the American infantry fighting vehicles, took it upon himself, and a consensus formed immediately. But this does not remove military-technical issues.

Most impressive (and most realistic) is the Polish proposal: according to the Wall Street Journal, Warsaw believes it is fundamentally possible to transfer all of its cash Leopard 2 - and this is about 240 units. The reasons are clear: in the near future, the South Korean K2 should become the main tank of the Polish Army, and the American M1 should be an additional one. Maintaining a fleet of three (and, together with the T-72 modifications, four) types of combat vehicles that are absolutely not unified among themselves will simply be too expensive for Poland.

Such a generous gift to the Armed Forces of Ukraine would come in very handy, especially since along with the tanks themselves, most likely, the Poles would give both spare parts and some amount of ammunition, but here the devilish details begin. Firstly, Warsaw needs Berlin's permission to transfer German equipment to third countries - however, it seems that this will not be the case. Secondly, the Leopards will be released as new equipment arrives to replace them - and this is more difficult: for example, deliveries of 360 Abrams from the States will stretch over 2023-2026. and will come in relatively small batches.

That is, if the Americans are not generous to supply, say, 100 tanks in one echelon, then the Poles will not “unfasten” a large number of vehicles to the Nazis at once, but will sip little by little, ten or two per batch - but this already turns the “overpower "into "zrada". The Armed Forces of Ukraine do not have the opportunity to accumulate equipment: due to the acute shortage of “armor” at the front, all newly arrived vehicles rush into battle right from the wheels.

If you are lucky and the equipment is not destroyed by the Russian troops, then it is still quickly “shut down” to an inoperable state with meager repair opportunities. As a result, broken vehicles are often left to rust in the ditches without having time to produce any noticeable effect, and if they still turn a blind eye to this with motorized infantry "tin cans", then the loss of expensive MBTs in this way can greatly upset the Western "allies". The same Poles have already taken literally from their hearts about a couple of hundred T-72s, which the Armed Forces of Ukraine successfully used up during their bloody "offensives", which Prime Minister Morawiecki personally recalled in a veiled manner on January 7th.

So, although the “case” with Polish (as well as German, Finnish, Swedish, and so on) Leopard 2 inspires certain concerns, you should not tear your hair in advance. It looks like the next round of the give-you-first game is about to begin in the KMW Owners Club, and the “winner” will be hunted for weeks, if not months.

The contribution of the "Old Europeans", Germans and French, to the combat effectiveness of the Armed Forces of Ukraine promises to be much less significant. The French police, in fact, Bastion armored cars are of no interest, especially since it seems that we are talking about those 20 units that Paris promised to deliver back in November - and they are still lucky.

Cannon armored vehicles AMX-10RC, of ​​course, are much more dangerous. This vehicle is de facto a light armored tank on wheels, including from the point of view of the chassis: the armored car does not turn in the usual way, but as if it were a tracked one, braking all the wheels of one side relative to the opposite.

This technical feature is the first factor that will limit the use of "tens" in the Ukrainian theater, especially in the winter-spring period. Muddy black earth impassability is difficult even for such a passable vehicle as the MT-LB caterpillar transporter, and a rather massive “wheeled tank” will get stuck in it literally at the first turn. At the same time, the vehicle is objectively not intended for “in line” combat, its task is quick raids and ambush strikes, but the famous Ukrainian tactical genius will almost certainly think of using it as a tank at the forefront of the next “offensive”. It can only end badly.

The German Marder infantry fighting vehicles, like the American Bradleys, are obviously designed to replace similar Soviet-made vehicles, the stocks of which seem to have come to an end. We are talking about 50 American and "30-40" German cars, and if you can be sure of deliveries from the States, then everything is still very vague with the Germans.

In particular, Berlin cited Switzerland's ban on the re-export of 20-mm automatic cannon shells as one of the reasons why deliveries did not begin earlier. Whether it has been removed today is unclear, but the Swiss did not allow the re-export of 35-mm ammunition for the Gepard ZSU, and deliveries for the Armed Forces of Ukraine were limited to 40 Norwegian shells.

If Bern still does not allow the transfer of 20-mm ammunition, then the Marder will be left without the main armament and will turn into bulky armored personnel carriers that the Nazis will squander without any sense. In addition, the Bundeswehr itself is now experiencing a shortage of not only tanks, but also combat-ready infantry fighting vehicles, so I am almost sure that Scholz and Lambrecht will continue to sabotage and force the Ukrainians to wait for the promised all three years (and then, you see, Zelensky will be hanged).

The most curious of all is what London will offer Kyiv from armored vehicles, but these will definitely not be MBTs. Cleverly's enigmatic phrase about "allied countries" does not lead us anywhere, but to ... "brotherly" Latvia, which has about 120 Scimitar light tanks purchased in the UK in 2014.

These vehicles with a 30-mm automatic gun in terms of firepower and armor protection more or less correspond to the BMP-2, are unified with the Spartan and Samaritan light tracked armored personnel carriers already known to the Armed Forces of Ukraine, and there are significant stocks of units for them. In addition to Latvia, the British themselves have about 300 of the same tanks, and - what a surprise - in the beginning of the year, their withdrawal from combat strength is just planned. There is also an opinion that Ukrainians can get a few dozen Warrior BMPs from among the surplus: they are armed with the same 30-mm cannon and, in general, are almost completely equivalent to the BMP-2.

Summing up, it is necessary to say the following: there was no talk, and there is no talk about any “breakthrough” and the beginning of the actual pumping of the Armed Forces of Ukraine with modern weapons. The Nazis continue to be fed little by little with equipment, only so that they do not go on the attack with only machine guns and in yellow-black loincloths, but nothing more. Yes, in fact, another transition to the “NATO standard” is being carried out, but this is not good for the Armed Forces of Ukraine: their combat power will not grow from this, but problems with ammunition supply and maintenance of unfamiliar complex equipment will increase.
Reporterin Yandex News
Reporterin Yandex Zen
7 comments
Information
Dear reader, to leave comments on the publication, you must sign in.