Why does the frigate "Admiral Gorshkov" need the ICRC "Liana" 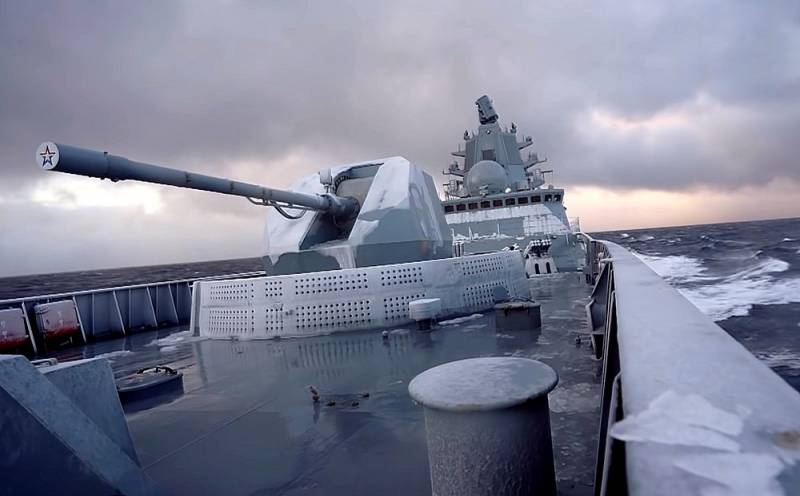 The day before, one very important event for the Russian Navy took place. The lead frigate of the 22350 series "Admiral Gorshkov", carrying Zircon hypersonic missiles, set off on a long sea voyage across the Atlantic, the Indian Ocean and the Mediterranean Sea. The Russian frigate set off on its long journey with the participation of President Putin and Defense Minister Shoigu, which speaks of the significance attached to the solemn ceremony.

Via video link, the Supreme Commander of the Russian Federation commented on the event as follows:

Today we have an important, if not significant, event: the frigate "Admiral Gorshkov" begins a long-distance sea voyage. But there is nothing unusual here: this is a common thing, but this time the ship is equipped with the latest Zircon hypersonic missile system, which has no analogues - this is a sea-based hypersonic system - as well as other weapons of the latest generations.
Indeed, in the lead ship of project 22350, all the most advanced Technology domestic military-industrial complex. This guided missile frigate was conceived as a replacement for the aging Soviet destroyers of the "Sarych" type and BOD of projects 1155 and 1155.1. "Admiral Gorshkov" was supposed to be the first in a series of surface ships of the 1st rank, capable of operating in the near, far sea and ocean zones, the main "workhorse" of the Russian Navy for the next few decades.

Unfortunately, the implementation of this ambitious shipbuilding project was very delayed for a number of reasons. The lead ship of the series was laid down back in 2006, and entered service only on July 28, 2018. Either the artillery mount for the frigate was not ready for the deadline, then the engine burned out due to a failure of the control system, then the manufacturer of air defense / missile defense systems missed the delivery deadlines, then after 2014 there were problems with Ukrainian ship power plants. However, despite all these ordeals, "Admiral Gorshkov" was able to successfully pass all the tests and enter the ranks of the Russian Navy.

So far, a series of these promising frigates is designed for 10 ships. There is a noticeable trend towards a consistent increase in their combat capability. If the first four ships had only 16 universal launch cells for missiles, then the fifth and sixth will already have 32 of them. anti-ship missiles "Onyx", cruise "Caliber" or hypersonic "Zircons" can be installed to choose from. In fact, the Project 2019M frigate can no longer be considered a frigate, but a full-fledged destroyer.

In other words, within the framework of this series, the Russian Navy will be able to cover its main needs for ships of the 1st rank. And it's very good news.

Another positive point can be considered that the latest Zircons hypersonic missiles, about which everyone has heard so much, were installed on the Admiral Gorshkov. Russian Defense Minister Sergei Shoigu commented on this event as follows:

At the same time, a feature of the Zircon hypersonic missiles is the ability to reliably overcome any modern advanced air defense systems - missile defense. The missile's flight speed is more than nine Machs, and the range is over a thousand kilometers.
The 3M22 Zircon hypersonic missiles will have to replace the heavy Soviet-made P-700 Granit anti-ship missiles. In addition to the frigates of project 22350 and 22350M, the TARKR of project 1144 and the nuclear submarine of project 949A Antey are considered as carriers for them. The main advantage of the Zircons is their phenomenal speed, which makes it extremely difficult to intercept by existing air defense / missile defense systems. Thanks to this, a rather frivolous idea was formed that now the Russian Navy will be able to easily “snap” any ships, their groups and formations of the enemy. This is true, but only in part.

Yes, a stationary target on land is almost guaranteed to be destroyed by a missile flying at hypersonic speed, be it Zircon or Dagger. But what about a moving sea target that can move at 30 knots per hour, like the US Navy's AUG?

The enemy will definitely not stand still, begging for a missile salvo on board. To hit an American aircraft carrier with Zircon or Dagger, you first need to find it in the sea with reconnaissance means and give target designation to, say, Admiral Gorshkov. A missile fired in flight will still have to be re-targeted, since the difficult target will move, perform its own maneuvers and counteract the Russian attack in every possible way, lifting it into the air and sending its carrier-based fighter aircraft towards it. In order for the Zircon strike to be successful, the Russian Navy must have a powerful reconnaissance system. The US Navy, in particular, has a huge satellite constellation and several AWACS aircraft on the deck of each of its aircraft carriers. What do we have here and now?

Based on the test results, the first launched Pion-NKS apparatus received high marks from the leadership of the Ministry of Defense and the command of the Navy. The satellite is officially accepted by the customer. Now the issue of manufacturing the next spacecraft is being actively discussed.
In other words, the Liana has not yet reached the state of full combat readiness, and it is on it that the effectiveness of the actions of the Russian Navy against naval targets largely depends. As soon as the Russian Navy receives a complete set of space "eyes and ears", then the deadly potential of the Zircons will be maximized.
Reporterin Yandex News
Reporterin Yandex Zen
16 comments
Information
Dear reader, to leave comments on the publication, you must sign in.