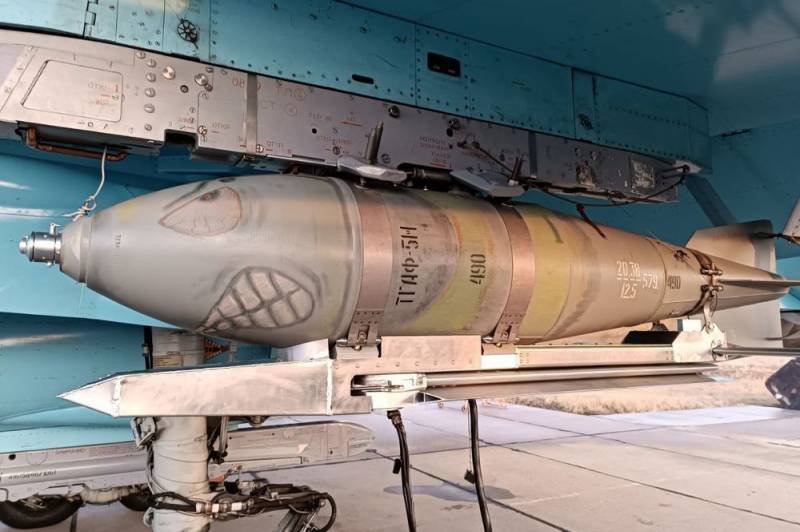 In the course of the NMD in Ukraine, the Russian Aerospace Forces acquired a system similar to the American JDAM kit, which allows you to turn a conventional free-fall bomb into a guided precision-guided munition.


The presented picture shows that the FAB-500 is equipped with a planning and correction module. Retractable wings were attached to the unguided aircraft weapon (pictured below). This indicates that this particular FAB-500 is now able to plan. However, the characteristics are not yet known.

The rather clumsy execution of the planning aerial bomb may indicate that we have before us a prototype, which in the future will undoubtedly be brought to mind.

We remind you that back in February 2003, the Bazalt State Enterprise Proposed to equip unguided aerial bombs with planning and correction modules in order to significantly increase the effectiveness of this type of weapon. Then the general director of the enterprise, Vladimir Korenkov, cited the FAB-500 M62 as an example, which after that could be used outside the range of enemy air defense systems. The effective range of its launch was 6,4 - 15 km from an altitude of 200-5000 meters at carrier speeds of 800-1100 km / h. The maximum damage radius of a vulnerable equipment was 110-180 meters, and lightly armored - 55 meters. At the same time, a standard sighting system is used to use aerial bombs equipped with a planning and correction module. The cost of the module does not exceed the cost of the bomb itself.

Note that the standard American JDAM (Joint Direct Attack Munition) is a set of equipment that is installed on top and is manufactured by Boeing. It allows you to turn unguided aerial bombs into high-precision GPS-guided weapons. When dropped from a high altitude, a bomb with a JDAM kit can fly up to 28 km along an optimal trajectory for an attack and hit a target with a deviation of no more than five meters.


As for Ukraine, it has long been asking the United States to provide it with aerial bombs with JDAM. Before the New Year, Washington allocated a $ 1,85 billion military aid package to Kyiv. It, at the very end of the list, indicates the transfer of "an undisclosed number of JDAM kits." Moreover, the Armed Forces of Ukraine are interested in obtaining a modification of the JDAM-ER, which allows the bomb to fly up to 80 km. At the same time, such a kit costs about $24; a GMLRS to HIMARS missile with the same range costs about 6 times more ($150) per unit.
Reporterin Yandex News
Reporterin Yandex Zen
7 comments
Information
Dear reader, to leave comments on the publication, you must sign in.