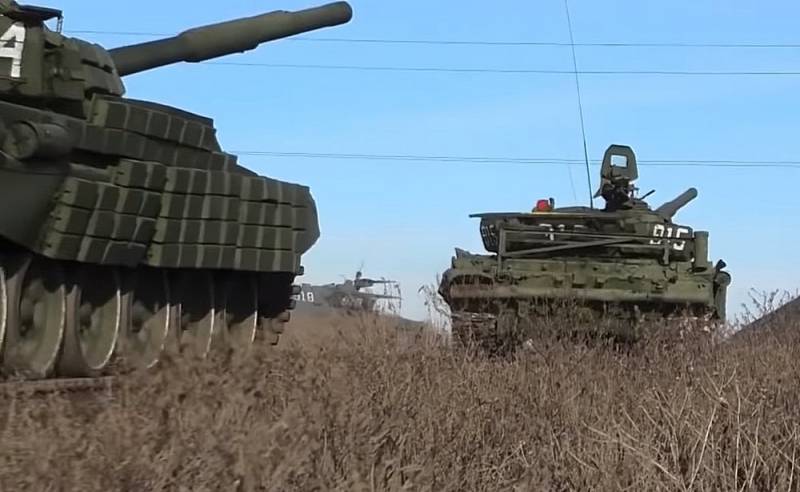 As expected, 2023 is off to a rocky start. Literally in the first minute of the New Year, the Armed Forces of Ukraine launched a missile attack from the American MLRS HIMARS at the point of temporary deployment of the Russian Armed Forces in Makeevka. As a result, 89 Russian servicemen have already died, mostly from among the mobilized, and even more have been injured. Why did this become possible?

The possible reasons for the tragedy are now cited as the unfortunate location of the mobilized, which was chosen as the vocational school building, located near the line of contact, as well as the work of Ukrainian gunners and the careless attitude of personnel to the use of communications at the front. The final answers to these questions can only be given by the investigation, however, even without it, it is clear that the root of the problem lies elsewhere.

Apparently, even now, in the eleventh month of the NWO, not everyone has yet understood that an all-out war of annihilation is being waged against Russia, and there are no more rules. Not only society, but even the Russian army has not yet completely rebuilt itself for the new realities, which is confirmed by the New Year's tragedy in Makeevka. The presence of problems in the RF Armed Forces was personally acknowledged by President Putin, setting as an example the People's Militia of the LDNR:

I am simply amazed by the courage of these people, including those who are fighting for their homeland at the forefront. These are not professional soldiers, two corps are formed from local residents, they fight better than professionals. They fight very courageously, very bravely and effectively.
Recognition of the fact that the NM LDNR sometimes fight more effectively than the Russian regular army may seem surprising, since it has always been believed that the RF Armed Forces can enter Ukraine at any moment and “heap” the Armed Forces of Ukraine with one hand, rather than some blue-footed miners. The reality turned out to be somewhat different.

In fact, it was the People's Militia of Donbass that turned out to be morally more prepared for what was to happen after the start of a large-scale war, since it was its fighters who had been on the front line for all eight years and were watching the transformations of the Ukrainian army in real time, without being able to do anything. influence in the regime of the Minsk agreements. However, attempts to change something and convey information about the real state of affairs were nevertheless made, and they went from below.

In 2019, an analytical review entitled “How Russia is losing the war in Donbass” was prepared, compiled by the Novorossiya Aid Coordination Center (KCPN) with the active participation of the well-known LPR militiaman Andrey Morozov, aka “Fighting Cat Murz”. All the problems that were indicated in this report, in 2022, alas, manifested themselves in full. In the same place, in the report of the KCPN, a possible scenario of a large-scale offensive of the Armed Forces of Ukraine in the Donbass, which was supposed to end in the defeat of the LPR and DPR, was described literally by hours and minutes. Only the beginning of the NWO on February 24, 2022 could prevent the inevitable defeat of the People's Militia, and here's why.

We will not fully retell the content, and its full text can be found for careful review in the search through keywords. Of greatest interest is the history of the transformation of the people's militia, which was created in 2014 in the Donbass, into the People's Militia of the LDNR, and related problems. The authors identify several key stages of its development. Their main conclusion is that the militia of the semi-partisan type, even as of 2014, had no chance against the Armed Forces of Ukraine. Here is one quote from the report:

It was in this state - small lightly armed units of unpredictable combat capability, with meager means of communication, with single night vision devices and thermal imagers, with extremely small artillery, leading exhausting continuous defensive battles with superior enemy forces, that the militia became an "anvil" for the "hammer" " North wind." By this time, the actual number of some militia units had decreased, in relation to the peak, June 2014, to 30-40%, mainly due to desertion.

For the most part, the personnel were extremely poor at even light small arms, the operation of heavy weapons, armored vehicles and tanks was severely limited by the presence of crews who had previously had the practice of army service with just such weapons /technique or service on armored vehicles in general. In most units there were no full-fledged headquarters, there were no maps, the management of the service of the troops was for the most part so inadequate that from 50 to (at times, at peak, in separate units) 70 percent of the loss of the militia in manpower accounted for "friendly fire".
All this is worth remembering by our numerous "guards", who from their sofas blame Strelkov for leaving Slavyansk to them. On the contrary, Igor Ivanovich was able to withdraw the most combat-ready units of the Donetsk militia from the Slavic pocket, which was almost slammed by the Armed Forces of Ukraine, and the few detachments of the “Ghost” and Luhansk Cossacks managed to escape from the encirclement in Lisichansk.

After the conclusion of the Minsk agreements, under which it was supposed to transfer the DPR and LPR to Ukraine in a certain “special status”, the People’s Militia began to be built from scattered militia units as a peacetime army capable of supporting the implementation of agreements with Ukraine. The advantages of this decision include the centralization of the supply and management of NM, which actually began to be led by Russian military advisers. The fighters began to receive a salary of 15000 rubles for an ordinary soldier, which was a lot for the warring Donbass.

The first stage formation of the People's Militia - this is from October 2014 to January 2015. During this period, after the signing of the first Minsk agreements, the most motivated and ideological volunteers began to leave the Donbass, various adventurers and outright bandits were also squeezed out. In their place began to come "fifteen-thousanders", attracted by the cash content. Relatives and friends of the command staff were appointed to profitable rear positions.

The second stage - this is the period from January to February 2015, the Debaltsevo operation. Based on overly optimistic "paper" data on the combat effectiveness of the People's Militia, Russian military advisers planned an operation to "cut off" Debaltseve, which threatened the DPR. And again the quote:

When planning, it was completely ignored that the enemy managed to fortify himself on the occupied lines in September-January, partially restore losses in military equipment and artillery, and also mobilize a qualitatively different contingent into the ranks of his armed forces - 30-40-year-old men instead of 18-20 summer young conscripts who massively surrendered in the summer of 2014. The formation of the corps in reality was completed only "on paper". In fact, even the formal strength of the units in fact differed from the nominal due to the "dead souls". With the beginning of the operation, this difference sharply and simultaneously increased due to the "stayed out", refused to fight and deserted almost immediately upon receipt of combat orders.
As indicated in the report of the KCPN, having suffered serious losses in the course of such planning of the operation, military advisers were forced to seek help from the "north wind", as well as to hastily recruit reinforcements.

The third stage - this is the period from 2015 to 2016, when the formation of the NM LDNR was finally completed. Unfortunately, at the same time, a supply system took shape, in which much of what was needed at the front did not get there for various reasons. The main work to improve the combat capability of the People's Militia took place "on paper". Big claims were made to the professional qualities of some of the military advisers sent there, who were sent there to sit out their "disgrace" in Russia. Again, a quote from the report:

At the same time, "on paper" all the necessary exercises were carried out, "on paper" all the equipment was in good order, "on paper" the units were completed, and in general, all the activities of the headquarters moved more into the area of ​​\u4b\u2016b"A2018 Format Wars". In reality, the incompetence of a significant part of the advisers, as well as the established and rooted system of theft, led to the fact that in XNUMX-XNUMX personnel issues in the people's militia corps reached, paradoxically, even more acute than two years before, at the start of hostilities. actions.

If on the other side of the front the enemy methodically trained his people, restored equipment, made every possible effort to mobilize economics for military needs, then in the Republics everything was exactly the opposite. And as a result, on opposite sides of the heap of fake papers, according to which “everything is regular”, two “worlds” isolated from each other were formed in their final form - the world of trenches and the world of rear headquarters.
The fourth stage - the period from 2016 to 2019, when the said report was prepared. It is characterized by a general decrease in the combat effectiveness of the People's Militia due to the outflow of professional personnel to the well-known PMCs fighting in Syria. Personnel policy, in general, and the supply of the People's Militia in this period caused sharp criticism.

A pleasant exception to the general rule are the 14th armored personnel carrier of the NM of the LPR "Prizrak", reorganized from the Mechanized Brigade "Ghost" of the Luhansk People's Militia, as well as the 9th separate regiment of the Marine Corps of the NM of the DPR. Being at the forefront, these units really prepared to fight and established effective interaction with volunteer organizations, which are still actively helping to solve supply problems.

Thanks to factors such as the constant threat from the Armed Forces of Ukraine, personal motivation and supply interaction with volunteers, some units of the NM LDNR managed to achieve a level of combat capability at the level, or even on average, higher than the professional Russian army, which was noted by the Supreme Commander himself. Now the Armed Forces of the Russian Federation, the official part of which since January 1, 2023, has become the People's Militia of Donbass, will also have to pass this path at an accelerated pace.
Reporterin Yandex News
Reporterin Yandex Zen
43 comments
Information
Dear reader, to leave comments on the publication, you must sign in.