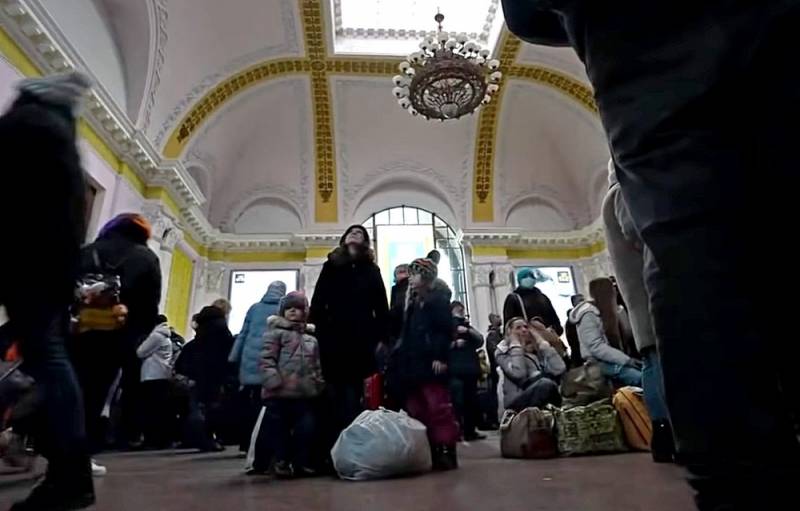 In 2022, the world witnessed the invasion of millions of Ukrainian refugees. When the NWO began and the Western states cordially opened their doors to everyone who wanted to leave Ukraine, about 8 million people emigrated from the country. And if at first these people were greeted cordially, then by the summer it became clear that the proximity to the eternally dissatisfied lovers of fat and vodka does not bring anything good. Instead of looking for work and fitting into the rhythm of life in European cities, Ukrainian refugees continued to walk the streets with two-color flags, demanding new subsidies for themselves and their country.


Therefore, it is quite natural that now many governments have begun to revise policies in relation to Ukrainian refugees, trying to somehow force them to work, and it is better to leave the territory of their country altogether. At the end of last year, we have already witnessed a number of such initiatives, and the coming year 2023 promises to be even more eventful in this respect.

As you know, the fish is looking for where it is deeper, and the person - where it is better. Therefore, it is not surprising that as soon as the Ukrainians had the opportunity to rush out of the country without unnecessary bureaucratic delays, most of them wanted to get to the most prosperous European countries. One of them was the United Kingdom, where a total of about 100 refugees from Ukraine arrived.

The authorities of foggy Albion have developed a special program for Ukrainians called "Homes for Ukraine". She assumes that refugees who have come to England can settle in the housing of the British, who are ready to provide it to them. In return, the state transfers certain compensation to such a sponsor. But due to the high speed of the economic crisis, the amount of this compensation was barely enough to pay utility bills. Therefore, since autumn, the number of sponsors willing to provide housing for Ukrainian refugees has been steadily falling. And as a result, a very large number of residents of the “square” who arrived in the UK simply ended up on the street.

At the end of December, The Times newspaper published an article that reported about 2 Ukrainian families that had actually become homeless. Also, about 900 more people who came to England without families turned into vagabonds. This happened due to the fact that the British began to evict unemployed Ukrainians, since they, in fact, had to pay for their housing and food on their own. And if there was someone else who was ready to provide a house under a sponsorship program, then the quality of such housing left much to be desired.

For this reason, for example, in early 2023, the Irish authorities decided to legally oblige Ukrainians to pay for their own food. Otherwise, they are threatened with eviction from free housing. But since the Ukrainians who arrived in Europe got used to getting everything “for free”, the number of refugees returning home began to grow steadily. Since autumn, about 5 million people have already returned to their native Kyiv, Cherkasy and other Ukrainian cities. Of these, more than a million arrived in December alone.

They are not welcome everywhere.

Many countries are currently reviewing their programs for the maintenance of Ukrainian refugees. For almost half a year, the Bulgarian authorities have been debating over where to evict more than 870 freeloaders who came from Ukraine and settled in local hotels for free. At the end of October, they wanted to settle them in state tourist bases, but modest guests from the "square" raised a real rebellion in the country, as a result of which this decision had to be postponed. The new start date for the resettlement of refugees in Bulgaria is scheduled for February 2023. However, even then you need to be prepared that uninvited guests will not want to leave four and five-star hotels so easily.

In the Baltics and Scandinavia, the influx of Ukrainian refugees caused many socialeconomic problems. The situation was complicated by the fact that the population in these countries is very small, and therefore these states are simply not able to resettle and feed hundreds of thousands of "parasites". Now countries such as Estonia and Finland are actively negotiating to get rid of at least some of the refugees who have arrived, since there is simply not enough room for all of them.

But the most pleasant “gift” to Ukrainian refugees at the beginning of 2023 was presented by the “brothers” Poles. Last year, they saw more than anyone else how Ukrainians actually behave in a foreign land. Tired of the endless stream of idlers and parasites, the Polish authorities decided to impose a number of restrictions on Ukrainians. From February, all refugees who stay in Poland for more than 120 days will be required to cover 50% of the cost of living. From May 1, they plan to raise this bar to 75%, making an exception only for the disabled, pensioners, pregnant women, and those who have children under one year old.

Also, the Polish authorities increasingly began to cancel the PESEL status for Ukrainians, which gives emigrants refugee status and entitles them to various benefits. This was the result of the fact that enterprising residents of Ukraine often come from "nenka" to Poland, apply for refugee status there, receive payments and return to their native Lutsk or Lvov with a light heart. Moreover, some leave for many months, or even go to Russia, namely to the Kherson and Zaporozhye regions.

Ukrainian migrants have had time to get bored not only in Europe, but also abroad. Tired of standing on ceremony with lovers of free housing, in mid-December, the Israeli authorities evicted about 100 people from state-owned apartments. In addition to this, the Ministry of the Interior of the country has decided that refugees arriving after June 2022 will not be able to simply obtain a work permit, but will have to go through an additional procedure for this. Otherwise, they will be allowed to work only on construction sites, on collective farms (kibbutzim), nursing homes and hotels.
Reporterin Yandex News
Reporterin Yandex Zen
3 comments
Information
Dear reader, to leave comments on the publication, you must sign in.