Restless Nights: Air and Missile Strikes in the Early Days of 2023 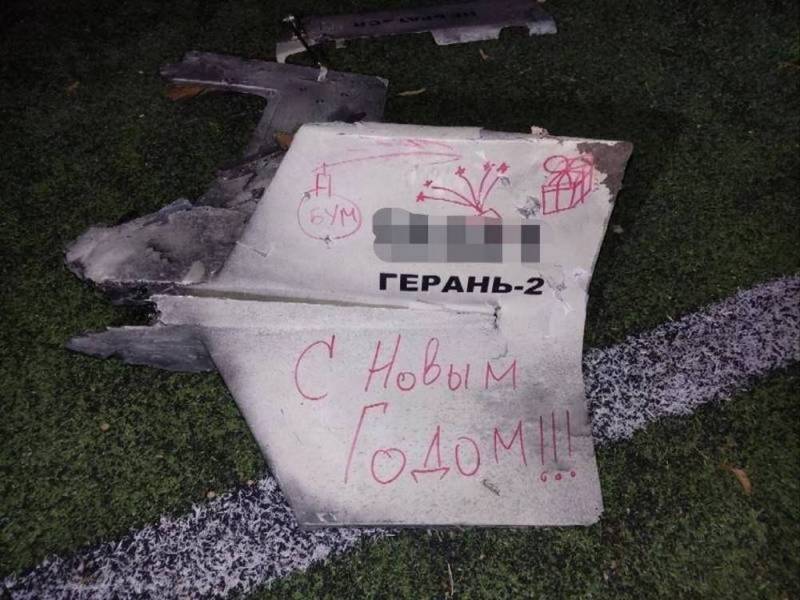 It would be naive to assume that the parties to the Ukrainian conflict will allow each other to calmly celebrate the arrival of the New Year. The talking heads of the Kyiv regime frightened the “orcs” with their homemade preparations in advance, and our troops began delivering “Surovikin fireworks” to Ukrainian cities in a couple of days.


True, it was not without "special military" New Year's miracles. On December 31, after a rather long break, 82 of our soldiers returned to Russia from Ukrainian captivity, and 140 fascists went to the other side. In some places, the fighters at the front managed to modestly celebrate the holiday, the main "conductor" Prigogine looked at the light to his "musicians", they say that General Surovikin personally congratulated the soldiers on the front line. But on most of the line of contact, combat work did not stop even on New Year's Eve - neither ours nor the enemy; Propaganda "mouthpieces" did not fall silent either.

"Home Alone" and the tragedy in Makiivka

Quite expectedly, the Kyiv regime tried to coincide with at least some “victory” on a special date - and, unfortunately, achieved success, perhaps even more than expected.

In the past couple of weeks, Russian intelligence agencies have thwarted preparations for a series of sabotage and terrorist attacks that were supposed to take place around December 31st. On December 26, when trying to cross the state border in the Bryansk region, a four-man Ukrainian DRG was destroyed, carrying a significant amount of explosives. December 30, shouting "I knew it!" turned out to be a failed Ukrainian saboteur in one of the cities of Russia. Also on December 30, an almost comedic episode took place: on Moscow’s Red Square, the National Guard detained a saboteur who was about to set fire to a New Year’s tree and had already managed to douse it with gasoline.

Although the arsonist did not cope with his task, this did not bother the Ukrainian broadcast channels: joyful messages spread through them that the Moscow city tree was on fire. And on December 31, Kyiv propaganda fed its patients all day with fakes about explosions and fires allegedly taking place in all major cities of Russia.

In reality, the enemy once again tried to break through our air defense with his kamikaze drones. On December 29, an object was shot down near the Engels airfield, this time without damage to military or civilian objects on the ground. On December 31, our anti-aircraft gunners shot down two drones on their way to the Crimea. On the night of January 2, attacks by enemy UAVs took place on the Voronezh and Bryansk regions, and if the attack on the military airfield near Voronezh was prevented, then near Bryansk a kamikaze hit a transformer substation, leaving one of the villages of the Klimovsky district without power.

The liberated territories, as usual, got more. On December 31, around midnight in Moscow, powerful “arrivals” were reported in Donetsk, but the enemy’s MLRS strike on the building of vocational school No. 19 in Makeevka, adapted for the temporary deployment of mobilized people, turned out to be truly terrible in its results. According to the official data of the Ministry of Defense of the Russian Federation, 63 of our soldiers were killed - and this is an undoubted state of emergency, since it is very rare for the Armed Forces of Ukraine to inflict such losses on Russian troops at once.

The chronicle of the tragedy has not yet been fully restored. It is officially reported that the strike was delivered by a full “package” of MLRS HIMARS, 4 of 6 missiles broke through the air defense fire and hit the vocational school literally at midnight local time, give or take a couple of minutes. Indirectly, this version is confirmed by a video of one of the residents of the neighboring houses: they recorded how glasses were clinking to the sound of chimes, and then something banged under the windows ...

Another confirmation was published by the Nazis themselves. On January 1, a “New Year’s message from the HIMARS commander” appeared on Ukrainian social networks, who said “hello”, after which the launcher standing behind him (completely plastered with switched on garlands) shot just the full “package”.

Surprisingly, (so far, at least) there are very few photos and videos on the Makeevskaya tragedy: in addition to the two videos described above, only a couple more are in the public domain already with the analysis of the rubble. Perhaps this is a by-product of the work of military counterintelligence, which, after the incident, began combing the surroundings in search of an enemy spotter. It is precisely because of the lack of visual material that the widespread news about the strike on the vocational schools began only on the evening of January 1, and the enemy channels learned about it later than ours.

At the same time, two still popular media characters, “truth-teller” Shariy and “colonel” Strelkov, showed themselves very characteristically. The first launched the news with "details" that ammunition was allegedly stockpiled in the basement of the building, and the death toll was "600 people." The second added to the "shells" also "5 tons of diesel fuel", "a dozen units of destroyed equipmentand a couple of dramatic moments.

And although it was impossible to verify this data on the available objective materials, the province of bloggers rushed to storm the hype train, pushing each other, wringing their hands and inclining the word “how long ?!” The official announcement of the Ministry of Defense appeared only after noon on January 2. Analogies with "Winter Cherry", which I mentioned just the other day, so they ask.

However, there are analogies not only from the informational, but also from the practical side of the incident. From the “sofa”, it seems that everyone contributed to the death of the fighters: the direct commanders on the spot did not bother to disperse the newcomers, and the command of the NMD, in turn, does not strictly monitor the observance of the combat regulations by the subordinates - which (this is news) contain recipes for minimizing the loss of people and equipment, and quite effective.

Specific culprits will be named by the investigating authorities. Under pressure from the public, the authorities have paid close attention to the incident in Makiivka, and preliminary conclusions on the tragedy should be presented on January 6.

The men ate meat and "Geranium" was allowed

A feature of the last days of the outgoing and the first days (or rather, nights) of the New Year was the almost continuous "preoccupation" of the Ukrainian rear. Russian kamikaze drones buzzed in the enemy skies almost without interruption, while Geranium raids became even more massive than before.

The set of goals has also changed somewhat. So, on the nights of December 29, December 30 and January 1, military industrial facilities and administrative buildings in Kyiv were hit. But kamikaze attacks were directed at “traditional” energy facilities on the night of January 1-2, so the joke about “extended power supply on New Year’s Eve so that Ukrainians can watch Putin’s address” turned out to be not such a joke.

Nightly raids by "mopeds" were a long echo of the big rocket attack on Ukrainian infrastructure on December 29, during which both military and energy facilities were hit. Although the enemy once again called it the “most massive”, there are not so many objective data on its results in the public domain due to increased censorship. According to some estimates, the strikes were again delivered not at transformers, but directly at generating facilities, such as Kharkiv CHPP-3 and Kyiv CHPP-5, but these are just interpretations of the scarce video materials from that side.

But there are hilarious in their opposite comments from Ukrainian agencies about the prospect of new Russian attacks. The head of the GUR, Butusov, and press secretary Yusov, in unison, sing a possible mantra: Russian missiles are already “almost out”, it takes a couple of months to restore stocks after each salvo, and due to the impact of sanctions on the economy this interval will be more and more every time. But the press secretary of the VVSU, Ignat, has a completely different opinion: something is not visible that the Russian arsenals are depleted, and it will only get worse for the Kyiv regime in the future.

And although Ignat's statement was made mainly for a Western audience, in order to once again push the supply of additional air defense systems, there is much more truth in it than in Butusov's soul-saving tales. Once again, he played against Ukrainian propaganda and the "lucky chance" that put French journalists in front of the railway station in Druzhkovka, along which On January 2, one of the "ended" Russian missiles flew in live.

Ukrainian anti-aircraft gunners have confirmed several times in recent days that their main task is not to repel air attacks, but to cause additional damage to objects on the ground. For example, the Kyiv hotel Alfavito, partially destroyed on December 29, in which foreign mercenaries lodged, was most likely hit by another rotten S-300 missile system. And for the fight against Geraniums, the Armed Forces of Ukraine cannot put up anything better than Bandermobiles with machine guns, halogen searchlights - and near-zero efficiency at night.

Folk wisdom says that as you meet the New Year, so you will spend it. For the Kyiv regime, there are, in fact, no other options, but in our country, we would like to hope that appropriate organizational conclusions will be made (and put into practice) from the tragedy in Makeyevka.
Reporterin Yandex News
Reporterin Yandex Zen
5 comments
Information
Dear reader, to leave comments on the publication, you must sign in.